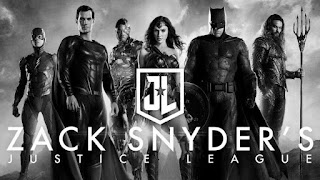 JUSTICE LEAGUE: THE SNYDER CUT is something that I wasn't initially looking forward to. While I'd liked MAN OF STEEL and WONDER WOMAN, I pretty much had written off the DC Cinematic Universe as a train wreck. I liked the BATMAN VS. SUPERMAN: DAWN OF JUSTICE director's cut as that showed that there was a coherent, if not necessarily good, movie within. I figured that the Snyder Cut would be the same with the movie being more understandable but not significantly different. Even the idea of adding two more hours and 70 million dollars to tweak the film didn't make me think I'd love it.

Much to my surprise, I did. If you came here for some Snyder bashing them I suggest you look elsewhere because this is going to be a largely positive review. I'm going to say this is my favorite of Zack Snyder's films and probably the best of the DC Cinematic Universe. It has its flaws and I think this definitely should have been two movies rather than the unholy four hour combination that it is. However, it gets right what the previous movie didn't: that the focus should be on the characters rather than the CGI. 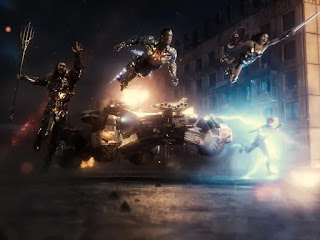 I think this movie pretty much is the antidote of what I thought was the biggest flaw of the Avengers movie that was its over-focus on the spectacle over character development. The Justice League felt like a poor man's The Avengers because that's what Joss Whedon was trying to achieve. This feels much more like a Zack Snyder movie and while that's a double edged sword (there is a massive amount of slow motion in this film), it's a very good Zack Sndyer movie. It also gives us a sense of what he was actually building to across three movies.

The premise of the film is still roughly the same but it's hard to put into words how utterly different the film is on nearly every conceivable level despite this. Steppenwolf (Ciaran Hinds) is coming to Earth to recover the three Mother Boxes, use the Mother Boxes to turn the world into a mirror of Apokolips, and open a gate for his master to exit through. Batman (Ben Affleck) is trying to assemble a Justice League in the wake of Superman's death and when that doesn't work, seek a means to restore Clark Kent/Kal-El (Henry Cavill) to life.

The first big change is that there's a lot more Fourth World mythology incorporated into the movie. Steppenwolf is more coherently established as a henchman of Darkseid, Desaad is incorporated, and we get the biggest D of Apokolips added as well. Darkseid replaces Steppenwolf as the guy who fought the ancient humans, Atlanteans, Green Lantern, and Themyscirans. This certainly helps establish the character well and there's a few homages to Peter Jackson's prologue defeat of Sauron. 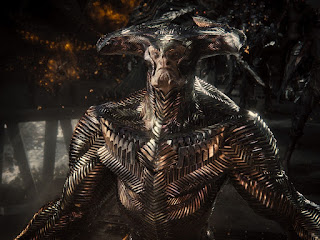 The next big benefit is the fact that Cyborg (Ray Fisher) has his story restored. Cyborg was almost an non-entity in the original movie, perhaps because Joss didn't like the character or other reasons. Either way, Cyborg is moved from being a nonentity to having a well-developed character arc as well as central role in defeating the Big Bad. It's a crying shame that so much of the original story arc was removed for the original cut.

There's also a great number of character building moments that were restored. Moments that helped establish the characters of the Flash (Ezra Miller) and Aquaman (Jason Momoa). A lot of the humor and cheap laugh scenes (like Aquaman and the lasso of truth) are gone but they're not really missed. There's a couple of tonally dissonant moments where Diana (Gal Gadot) splatters a guy into an exploding wall before having a touching heart-to-heart with a little girl about being anyone who she wanted to be. But there's also moments where the Flash rescues Iris West from a car accident while stealing some hot dogs to feed some hungry puppies. 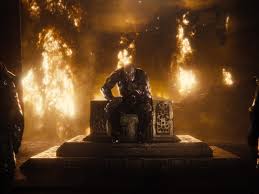 Joe Morton's Silas Stone is the unsung hero of the movie, providing a believable and powerful portrait of a grieving father who has unwittingly helped contribute to the end of the world. He failed his son before his transformation and all of his attempts to reach out are met with failure. I also have to say there's actually a scene where Jared Leto plays the Joker and it doesn't suck. Even the makeup is right on him.

The CGI and special effects are much improved from the original cut. There's no more infamous Henry Cavill mustache effect and things look pretty seamless. The action is good but that kind of goes without saying in modern superhero movies. I think Ben Affleck's Batsuit looks kind of ridiculous but that's a small complaint overall. Really, I'm here for tender moments between Lois Lane and Martha.

There's a few moments in the movie that are unnecessary and that could have been trimmed. As much as I liked the surprise appearance of the Martian Manhunter, his presence causes you to wonder why he wasn't there with the world at stake. I also really wanted to see more of Joe Manganiello's Deathstroke. If they were filming new scenes then they could have at least thrown in a fight scene between him and Batman. Maybe it's just that I know we're never getting the Batman movie with him versus Batfleck.

In conclusion, is this a good movie? Oh yes. So much so that I would like to see the rest of the Snyderverse. I want to see more Batfleck, the Knightmare future, and follow up on the Darkseid plot. I even like the small hints of Bruce and Diana even though the latter is far less fetishized this time around. It's effectively like watching two movies instead of one but I don't think of that as a bad thing.