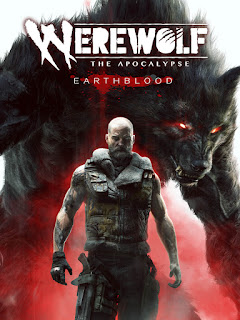 WEREWOLF THE APOCALYSPE: EARTHBLOOD is a AA video game developed by Cyanide studios and published by Nacon. I mostly know them from 2018's CALL OF CTHULHU game that started very strong and then became really terrible. Still, I am a huge World of Darkness fan and am very happy to support the franchise. Still, I kept my expectations measured about the game and what it was good. So, is it any good?

Eh, it's so so. I'm not going to lie that this game feels like it's a PS2 game let alone PS4 at times and it has a lot of repetitive gameplay as well as reused environments. Still, there's some good elements to it and might be worth a purchase once the price has gone down from its initial cost. If that sounds like a three star review versus something that is either very good or very bad. Well, you would be right.

The premise of the game is you are a Fiana Garou named Cahal who is exiled from his caern after killing another werewolf during a frenzy. Returning after several years, he discovers that his daughter has disowned him and the caern is now home to a human environmental resistance group. The werewolves and humans are fighting against Endron Oil that is based on a combination of Enron and Exxon Oil.

Endron is actually more like Woflram and Hart than your typical evil corporation since it is devoted to destroying the environment for their evil spiritual masters. This is all complicated stuff from the tabletop roleplaying game and doesn't really get much explanation. Despite this, it's not really a hard concept to get. "Viking-like Fantasy Werewolves vs. Evil Corporate Soldiers! Save the Earth from the polluting evil doers and their mercenaries!"

Cahal basically spends most of the game wandering around Endron facilities, sneaking past various group of guards and slaughtering large groups of mooks in battle arenas. It somewhat undermines the realism, as much as realism can be said to apply to the game, that literally hundreds of people can be killed by our protagonists in the "real world" without it being a national news story.

I understand the game was limited by its budget but I think a better way to handle it would have had Cahal fighting Bane spirits like Scraglings or Formori rather than the endless parade of human mercenaries. Not just because it would have made the game more memorable but also because the Delerium doesn't appear to be a thing here. You occassionally fight the Power Loader from Alien and mooks empowered by the "biofuel" but the enemy variety is low.

It's also interesting to note just how big of a role that stealth plays in the game. Werewolves are not particularly associated with stealth in my tabletop games, so it's interesting to see Cahal sneaking around guards and turning off security cameras for a large chunk of the game. It's fine, sort of discount Metal Gear Solid, but it does feel a little weird. There's no Gifts present in the game either, which I understand, but could have helped liven up the story a bit.

The graphics are serviceable but, again, feel a bit dated. I think a more stylized version of the characters would have benefited. I can't help but think of HEART OF THE FOREST which took the exact opposite take with the game, de-emphaizing the violence. The latter is a visual novel but shows the benefit of focusing on the character and artistry of the setting versus the bloodshed.

The ending also feels like it is incomplete. Given all the events that happen to Cahal, I think a more definitive ending to the character would have been better. I won't spoil but the game leaves things on a cliffhanger with nothing really resolved. I don't foresee a sequel being likely and the experience is soured as a result. There's a lot of potential good character development with Cahal and his daughter even if I feel like it's a little too traditional to go, "my wife was killed and now I am mad."

In conclusion, this is definitely a decent game but I think they could have aimed a bit higher or wackier. If they weren't going to be able to do as much with the environments and characters, then they might have just set the entire thing inside an Endron facility and made it, "Escape from Endron" rather than try to break it up. Something more like Arkham Asylum than trying to do a pseudo-open world where Endron's mine is literally 200 feet away from the heart of the caern.