Great news! I'm pleased to say that I have been nominated for two audiobook awards at the Indie Audiobook Awards at the HearNow Festival. 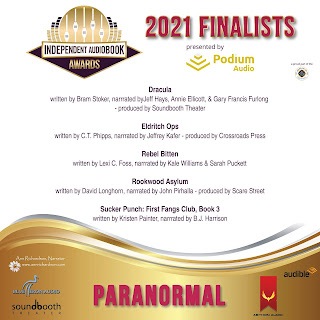 Derek Hawthorne has ascended to become a member of the all-powerful Committee, which rules the world through the nebulous House. The House, officially, exists to protect humanity from the vampires, demons, and other forces of darkness that imperil humanity. Unofficially, it exists to protect its own power.

When his old partner, Christopher Hang, turns up as one of the undead — Derek is nonplussed to say the least. Christopher also has a message that troubles the tiny remains of Derek's conscience: The House is running a secret project to not only control supernaturals but eliminate them. Now, Derek has to figure out if he's to side with the supernatural or humanity or neither. Oh and did we mention Dracula, pirates, and werewolves were involved, too? 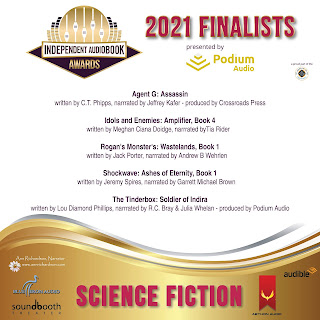 Agent G, now going by the name Case, thought he'd won. He'd exposed his former employers, shared black technology with the world, and killed the man who'd started it all.

Unfortunately, history slows for no man. After a volcanic eruption decimates the United States, G spends the next decade witnessing humanity rebuild itself into a corporate-run dystopia.

Preferring to the be the boot rather than the ant, Case has become a powerful executive in the new cyberpunk world. Unfortunately, that doesn't mean he's immune to his past. Contacted by the only woman he ever loved, Case finds himself, once more, embroiled in a conspiracy to take what little the public has left. Now, he has to decide whether to save what remains of the world or rule it.