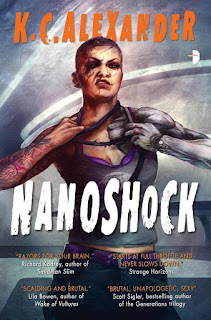 NANOSHOCK is the sequel to NECROTECH, a novel that I felt was one of the best cyberpunk novels of the new millennium. Cyberpunk hit its heyday in the Eighties and has never really return to its previous prominence, probably due to the fact we managed to make it reality around the late Nineties with the first present-day hackers movie being, well, Hackers. The SINless series is an homage to the classic Eighties cyberpunk, though, with its vulgar but unchanting heroine Riko as well as her insanely self-destructive attitude to anyone or anything that attempts to control her (or be her friend).

The premise is that Riko is still recovering from the events of the previous book. Her credit is in the toilet, she may have betrayed her fellow saints (street mercenaries) to a corporation, and her girlfriend became a kind of cyber-zombie that needed to be put down. Now she's pursuing a series of questionable leads in hopes of finding something that will reveal the truth of her situation. Aiding her in this is the corrupt corporate execute, Malik Reed, and the brother of her late girlfriend, Indigo, who still suspects her of being responsible for Nanji's death.

Nanoshock is book I have complicated feelings regarding. The book is trying much harder to be harsher, more vulgar, and more in your face than Necrotech. It opens up with Riko having sex with a nun (not a real one) in a back alley as a way to shock the audience. Riko also needlessly antagonizes everyone around her, physically assaulting and lashing out at her allies from the previous book. This is part of the story, though, as Riko was diagnosed with PTSD and her remaining paying gigs are all bound to trigger it.

I like that K.C. Alexander is willing to make her heroine not the most approachable or even likable at times. A more conventional author would play up her sexual tension with characters like Malik or Gregory but she has Riko even more antagonistic as a result. Relationships that seemed like thwy would be permanent or grow closer are permanently fractured in this volume. It isn't exactly a feel good response but this isn't exactly a feel good book. Sometimes, events break a character and the consequences aren't pretty.

The world of SINless is a fascinating one, being a Judge Dredd-esque archaology that seems both infinite as well as claustrophobic as well. There's endless numbers of horrible neighborhoods, new gangs, and murderous flamboyant mercenaries to deal with. The addition of technological zombies in the necrotech only adds to the horrifying but fascinating detail as well. Eventually, you put too much tech inside you then that tech will take over. It fits the world and makes things even more surreal and terrifying.

If I had one complaint about the book, it is the fact that the central plot to discover who did what to Riko and her team isn't advanced much. Riko goes to elaborate lengths to try and recover the tape that seemingly convicts her but comes no closer to acquiring it by the end of the book. Instead, her journey is a personal one and ends on a cliffhanger I've been hoping for a resolution to since the book came out.

In conclusion, I really enjoyed this book but it goes to darker and edgier places than the original. Not all readers will be comfortable with its harsh depiction of its characters, sexuality, and violence. However, that's part of the book's appeal. It is definitely a cyberPUNK book and all the stronger for its choices.