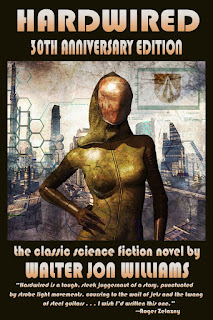 Cyberpunk is a genre that arose organically during the 1980s as advancing technology as well as a culture of corporate greed set against the backdrop of the Cold War led to a mixture of nihilism as well as utopian skepticism. Basically, many people believed that science would definitely change the world but that the problems of human society would remain the same. People might visit the moon but would they ever deal with systemic poverty or racism? Probably not. Bruce Sterling, William Gibson, and Pat Cadigan all contributed the basis for what would eventually become a thriving subset of dystopian science fiction.

Somewhat overlooked but every bit as influential is Walter Jon William's Hardwired. It was the chief influence of Mike Pondsmith's Cyberpunk 2020 and several other works that were the basis for our popular image of a future gone horribly wrong. It's interesting that the book is actually closer to a Western in many ways than an urban crime noir as so many cyberpunk books. The technology is there but it is a rugged desert in Texas where the majority of the action takes place versus Blade Runner's Los Angeles or Gibson's Sprawl. This helps differentiate it from many of its contemporaries and is another reason I recommend the book so highly.

The premise is centered around two iconic characters. Cowboy is a rich smuggler who drives around the wastelands of a post-apocalyptic Earth inside a neural-linked tank that provides him access to the firepower necessary to do his job. He's given a questionable job that will take him through bandit-ridden territory to deliver medicine that may come from the people he hates most in the world. Sarah is a high(ish)-class prostitute who is taking care of her junkie brother when she undergoes plastic surgery to seduce a rich "Orbital" on behalf of a mysterious client. If they're on the level, it could mean an escape from the hell of the Earth but that's a big if.

The world is a fascinating one with the people of Earth having become citizens in a Third World hellhole following their defeat at the hands of the aforementioned Orbitals. The megacorporations based there now control the world's economy as they devastated humanity's infrastructure with mass-drivers after a brutal but short-lived war that ended in the favor of those with the ultimate high ground. It's not quite Mad Max, Earth has technology as well as society, but they depend on the whims of the solar system's elite. It reminded me a bit of anime's Gundam and if not for the timing, I'd wonder if the creator was partially inspired by Hardwired.

This is a gritty and dark novel but also a fairly short one. Neither Sarah or Cowboy's story last very long and don't intersect but are still able to paint a vivid picture of their awful society. They are both criminals but the society they live in is so manifestly unjust that any actions they take, no matter how cruel, seem justified. Betrayal and treachery are things both of them are prepared for but still manage to hit them because they can't turn down the jobs they know are too good to be true. It adds to the tragedy and pathos of the novel.

I will say that some of the novel's elements haven't aged particularly well and readers should be forewarned. Sarah is hired to seduce a Orbital that has changed from an old male body to a beautiful young female body despite the former being heterosexual. The latter is depicted as simply indulging a personal vice rather than being a transwoman but its easy to see how many readers would have assumed so. "Princess" is certainly not meant to be a character any sympathy or understanding other than being a rich old male psychopath with a Sapphic fetish. This element is the only one that bothered me in an otherwise fantastic book.

In conclusion, Hardwired is required reading for any true cyberpunk fan and doesn't take much time to read. I picked up the 30th Anniversary version that contains additional material from the author that I feel is well worth reading. This is a book that, upon completion, I immediately re-read in order to fully soak up the world created. The audiobook is also excellent and one that I recommend for its excellent narration.