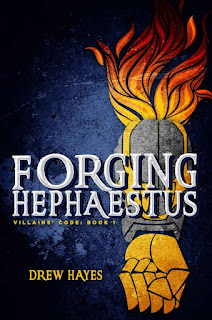 FORGING HEPHAESTUS is a lengthy (700+) page novel by Drew Hayes about the Guild of Villainous Reformation. The organization is a semi-public group that exists for the purposes of redeeming villains but, actually, is the mafia that maintains a ruthless grip on the world's supervillains. The Guild is in a very comfortable, almost chummy, relationship with the heroes and eliminates the worst of their kind while keeping the families of heroes out of their crimes' ways. This doesn't sit well with all of the heroes and villains with some of them wanting to go back to a more Wild West-esque lawlessness.

Toni is unaware of this, though, when she gets captured by the Guild while breaking into one of their vaults. This was all a test to see if she had the makings of being a member of the Guild and they assign her to Pseudonym, formerly the supervillain Fornax, who is presently just going by the name Ivan. Ivan is one of the most feared supervillains to ever live but has retired for the purposes of living a normal life with the caveat of keeping part of the Guild's business in order to maintain the tenuous peace between heroes and villains. He and Toni instantly bond as the former explains the importance of the Code.

The Guild is a bit boring in how much it does in order to make itself presentable to the rest of the world, almost to the point they might not be villains at all. If you like your bad guys as agents of chaos then this is definitely not the book for you. However, that's the set up for the book as we come to understand the rebels who want to go back to the old days and the horrific consequences of what happens when the peace is finally broken.

My favorite part of the book is the fact the heroes haven't always been heroic. They are forced to deal with a long-time member who is openly racist and the fact its predecessor organization stole a magic crown from a black superhero for no other reason than to keep him from helping people. They're still "mostly" good but the law has never been entirely the side of right. I think this helps make the supervillains seem more rationale as our heroes while also making it clear that things are considerably murkier than the four-color environment would suggest.

The chief appeal of the book is its slice-of-life nature as we spend enough time with Tori, Fornax, and other characters that we really get a sense of how their lives function. This reminds me a bit of the superhero show Stargirl and how a major chunk of what made that show work was dealing with the "normal" lives of both its heroes as well as villains. Fornax is a bit "too" domesticated but that's something he's aware of and if anyone was ever on the receiving end of his wrath, they'd thank God every day that it was the case. Others, however, do not understand this and seek to wake the dragon so to speak.

I liked all the main characters from Cyber Geek to Bahamut with all of their individual tales tying into the greater themes of Hero vs. Villain as well as how both is really just a point of view at this time. It's like a more realistic City of Heroes versus an actual conflict between good vs. evil. That's because of the Guild trying to be embrace Pragmatic Evil (see TV tropes.org) versus the more flamboyant evil of the comics.

Overall, this was a decent read but a little slow to reach its climax. The characters are okay but not exceptional either. They rarely move past their archetype of geeky heroes or lovable rogues or unspeakable evils. So I recommend the story to those who want a long but enjoyable story without many surprises. Still, I took an entire week to read this straight through and loved every minute of it. I think all long-term fans of superhero comics and media will find this an excellent novel to enjoy as an alternative to the mainstream Marvel and DC characters.