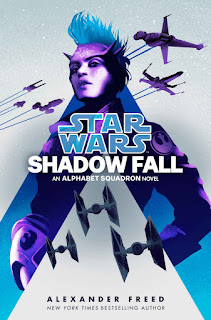 SHADOW FALL by Alexander Freed is the sequel to ALPHABET SQUADRON. Alexander Freed has a history of writing Star Wars novels in the new canon that take a remarkably unglamorous look at the Galactic Civil War. His heroes are frequently cynical, full of trauma, and often confused at meeting people who really believe it is a battle of Good vs. Evil. Alexander Freed also tends to right very sympathetic Imperial characters with one of his books being a prequel to Inferno Squad.

The premise of Alphabet Squadron as a series is Yrica (pronounced "Erica" in Jacen Solo fashion) Quell is a defecting Imperial starfighter pilot who has been sent to head up a ragtag band of misfits with varying starfighter types. Their goal is to bring down Shadow Wing, an elite Imperial combat unit that has been reigning hell on various groups during the Imperial retreat after Endor. It is something of a quixotic quest as the war effort is far bigger than the hunt for any individual group of Imperials, even as dangerous as Shadow Squadron.

In a perhaps deliberate deconstruction of the original Rogue Squadron and Wraith Squadron novels, Alphabet Squadron is not a group that comes together as a family. Indeed, its members become even more divided and shaken up by getting to know one another. Worse, their effectiveness is frequently questionable as they are carrying around enough baggage that they never know if the other members have their backs (or even if they want them).

There was a good scene in the previous novel where Hera Syndulla (Star Wars: Rebels) decides to mentor Yrica because she doesn't trust Intelligence officer Adal. This proves to be wasted effort because Yrica is a spectacularly awful leader and has no real loyalty to the Rebellion. Indeed, her Imperial war crimes are severe but she can't really seem to recant of them either and just wants to pretend she wasn't involved in them.

Opposing Alphabet Squadron is the forces of Shadow Squadron. The Empire is in full retreat and scrambling for supplies, reinforcements, and equipment. They have since been taken over by Soran Keize, a pilot dedicated to protecting them as well as giving them purpose. Soran knows the war is lost and pointless but has a passionate devotion to the people he leads, even if it gets countless innocent people killed.

The novel follows Alphabet Squadron as they are stationed over a Deep Core world called Cerberon. Ceberon is a planet with remaining Imperial sympathies that is mostly pacified by the time events spiral out of control for both sides. Both sides wish to destroy the other for morale purposes and indirectly cause massive collateral damage. Friendships are destroyed, lives lost, and perspectives changed in a surprisingly dark as well as deep storyline.

So why the comparatively low score? Well, honestly, almost every character in this book is deeply unlikable. Yrica is a war criminal, Nath is a corrupt glory hound, Chass' harsh cruel exterior hides a harsh cruel interior, and Wyl--okay Wyl is nice. There's even a lengthy section of the book where Chass spends it hating on the religious commune that rescued her from certain death. It may be interesting but it's not exactly fun to read.

In conclusion, I recommend this book but I have to say its not the kind of read that I really go to Star Wars for. Given the awful things on in the world today, I'm pretty much for a book that reinforces that the shooting of Space Nazis in the face is a good thing. No one here really seems to have any ideological commitment to the shooting of Space Nazis. If not for Wyl, I wouldn't want any of these people on my team.