Star Quest: All That Remains by Patricia Macomber review 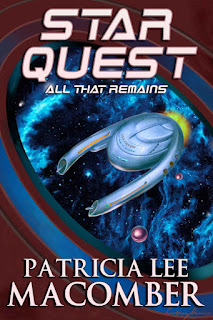 STAR QUEST: ALL THAT REMAINS is the second book in the STAR QUEST series by Patricia Lee Macomber. The Star Quest series is a idealized Star Trek-esque space opera about the first human interstellar starship. It is sent out into the Great Beyond after mankind barely manages to repel an alien invasion. It has a ANOTHER LIFE and STAR TREK: ENTERPRISE-esque feel, though far more entertaining than both are for me.

Captain Hunter and the crew of the Endeavor are really good Federation-esque citizens, which contributes to its Star Trek pastiche-esque flabor. This isn't an insult but a compliment as Star Trek is one of the most influential series of all time but very few science fiction series really "get it." Too often, they get it only superficially similar or outright invert its themes to something more cynical.

Star Quest really is an homage the way THE ORVILLE is but lacking Seth MacFarland's toilet humor. Instead, this is coming from a place of love and really shows with every page. It's about a bunch of scientists and explorers treading into the unknown in order to see what is out there. They're also just really nice people and that has a lot of merit to it by itself.

They may not be the most dynamic or flawed bunch but I could easily imagine myself watching a Amazon or Netflix show about them. After having watched endless parades of antiheroes, its nice to have a bunch of people without overwhelming amounts of baggage.

This book deals with the crew coming across a space vessel where the entire crew has seemingly died for no reason. It's a classic sci-fi TV plot and Patricia Macomber gives her own spin on the ghost vessel storyline. It also climaxed in a way that I felt was very true to the setting and themes that the Star Quest series is apparently working on.

If I had one small complaint about the book, it feels more like the next episode of the Star Quest television series than the next book in an ongoing literature series. That's not necessarily a bad thing as I love Peter David's NEW FRONTIERS books that were similarly self-contained science fiction adventures. I wouldn't mind a bit more character development, though. Either way, this was a solid and entertaining story.