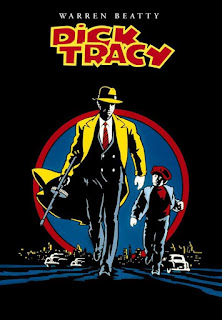 Dick Tracy is one of those movies that I end up returning to every few years. It's a film that has never received a vast following and rarely tops anyone's favorites but I think of it as a film that everyone should watch. It is the very definition of a cult classic and it is a film that has aged remarkably well due to its unique visual style. Sadly, the behind-the-scenes politics and behavior of Warren Beatty means we probably won't see any more Dick Tracy content until he died but at least it was due to him loving the character "that" much.

The premise is the inspiration for virtually all other police procedurals as well as at least part of Batman's world. Dick Tracy is a square-jawed police detective in an unnamed city (Homeville in the comic strip) that is overrun by grotesque gangsters. The comic strip has been running since 1931 and this is set somewhere during Prohibition, though it incorporates several World War 2 characters in the mix. It's a shame this movie never got a sequel because I'd love to see Tracy murder some Nazis.

The movie version of Tracy (Warren Beatty) doesn't deal with illegal liquor or foreign spies, though, but gambling. Big Boy Caprice (Al Pacino) eliminates his chief rival in the city's underworld, Lips Malice, in order to take over his club as well as girl, Breathless Mahoney (Madonna). Big Boy intends to unite the city's underworld underneath him and unleash an unparalleled crime wave. Tracy thinks he can take down Big Boy if he gets either a young kid (Charlie Korsmo) or Mahoney to testify against Big Boy. Things get complicated when a literally faceless new enemy, the Blank, arrives and starts playing Tracy versus Big Boy.

Dick Tracy is not a particularly complicated movie but it's surprisingly rich in detail. You get the impression this is a setting that has a fairly vast and deep history to it. Rather than just using one or two Tracy villains, virtually his entire Rogues Gallery appears in various scenes. It's like if Tim Burton's Batman had crowd scenes with the Legion of Doom. There's Pruneface, Flat Top, Itchy, and many other grotesques that usually only get one or two scenes but are memorable to fans while also hinting at a much richer universe. Unfortunately, most of them get knocked off without fanfare.

Most modern viewers are not going to have any idea who any of these characters are, though, despite how memorable their appearances are. Villains in Dick Tracy, the men at least, wear their sins on their faces so all of them are deformed with fantastic prosthetics. It was a conscious stylistic choice along with the fact the world is painted in primary colors of greens, reds, yellows, and blues in order to look more like a comic strip. It certainly adds a unique look to the film and helps it stick in your mind.

Indeed, the look of the film is hard to put into words because it doesn't look like anything else in film. Tim Burton's Batman was released the year before and is about the only movie I think that can compare for world-building. Matte paintings, models, and costuming all combine to make it jump alive. The use of practical effects means that this movie is every bit as gorgeous looking today as when it originally released. The action scenes aren't particularly great but there's truly memorable Tommy Gun fight at the end that sticks with me decades later.

Dick Tracy's musical score also deserves to be talked about because it may be the only time in history that there were too many masters at work for a single film. The Dick Tracy score consists of work by Danny Elfman (Batman, Harry Potter), Madonna, and Stephen Sondheim (everything ever done by Meatloaf). There's some truly fantastic songs on this movie with the upbeat jazz tune, "Back in Business" being a particular favorite of mine. Good luck getting the complete soundtrack anywhere but Youtube, though, because no one apparently got along behind the scenes.

Despite the many good qualities about Dick Tracy, the film has some serious flaws. Some of it dates back to the original material and others are issues unique to the film. Tonally, a lot of the scenes are off-kilter. Al Pacino is incredibly entertaining as Big Boy Caprice, providing a lot of the movie's energy but definitely went for a much more cartoonish take than Beatty or Madonna's understated performance. Beatty at 52 still looks like a man in his early thirties because God gave him some spectacular genes but isn't really suited for an action hero's role. The Kid and Tess Trueheart (Glenn Headly) are written so terribly that you can't imagine why Tracy wouldn't run screaming into Madonna's arms.

Speaking of Madonna, she is absolutely fabulous in this. I've never been a really huge fan of the Material Girl, let alone her acting, but I unironically state this is her best role aside from Evita. Also, Breathless is fantastically sexy with the film incredibly aware of this. Beatty and Madonna both have enormous chemistry, understandable given their RL relationship at the time, and it makes their scenes onscreen sizzle. The fact we're not meant to root for Breathless and Tracy kind of hurts the movie overall, even if it makes the ending stronger.

Warren Beatty was the last of the Golden Age of Hollywood movie stars alongside Robert Redford and he apparently called in every single favor he had for the cast. In addition to Al Pacino and Madonna, the movie has Dustin Hoffman, Mandy Patinkin, Paul Sorvino, and Dick fricking Van Dyke spread throughout the cast. Apparently, Dustin Hoffman actually took the role as a joke because his character is utterly incomprehensible for 99% of his acting.

Oddly, I think this movie being rated PG was a great mistake as it's definitely PG-13 and if they had the slightest trace of blood would have been a decent R-rated movie despite its binary good vs. evil. People are routinely gunned down, one guy gets drowned in cement, the sexual double entendres are off the chart, and the body count probably matches several Bond movies. The Dick Tracy comic strips were equally violent but it's kind of surprising to see Madonna in see-through negligee in the same sort of movie rating as Star Wars.

In conclusion, this is a fascinating movie and wonderful experience but it does have some serious issues. I feel like there could have been a lot more from this franchise if it had been allowed to have a sequel or reboot. Unfortunately, Warren Beatty has effectively sat on the rights for thirty years and still owns them to this day. He absolutely loves the character and his experience playing him but doesn't want anyone else to play with "his" toys.