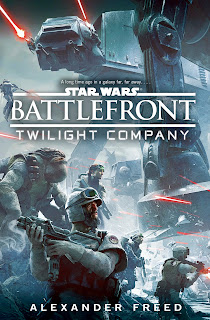 BATTLE FRONT: TWILIGHT COMPANY by Alexander Freed is a Star Wars novel following the adventures of a team of Rebel Mobile Infantry soldiers from after the Battle of Yavin to after the Battle of Hoth. It is a darker and edgier sort of book than the usual Star Wars fair, though still fundamentally idealistic at its core. Basically, it's a book dedicated to all those rebels gunned down on the Tantive IV and who were getting blasted in Hoth's trenches by AT-ATs. In the steak dinner of the Rebel Alliance, they are the diced carrots on the side.

The book primarily follows the perspective of Hazram Namir. Namir comes from a primitive war-torn world where he has served in the causes of numerous warlords just shy of Immorten Joe in terms of morality. Seeing a chance to get off his planet, he signs up with the Rebel Alliance and they put him with Twilight Company. Namir is the absolute worst sort of person to work with an idealistic band of do-gooders in the fact he's an incredibly cynical misanthrope who only works with the Rebels because they were the only game in town when he wanted to leave his planet.

Twilight Company is in the process of retreating from the Mid Rim when our story picks up. The Rebel Alliance overestimated just how badly the Empire was hurt by the Death Star's destruction and believed the galaxy was ripe for mass uprising. Instead, after some initial successes, the Empire has struck back (tee he) and they're in full retreat. Along the way, they pick up the locals who want to continue fighting the Empire offworld as well as capture the planetary governor that is trying to defect.

Everi Chalis is more than just the governor of a no-nothing planet that the Rebel Alliance can't hold against the Empire's might. She's a former student of A New Dawn villain, Count Vidian, as well as the Empire's former chief efficiency expert. Chalis has an immensely bloated ego about her importance to both the Empire and Rebellion but genuinely knows what makes the mag trams run on time. The Rebel Alliance is full of plucky young heroes and heroines but someone who can actually say, "yes, this is a good military target. Go blow up this thing" is more valuable than her weight in corusca stones. Mind you, she's kind of an ex-slaver and mass murderer but even the reader forgets this in her energetic perkiness. I have her played by Reese Witherspoon in my head.

Much of the book's entertainment value is in how entertainingly wrong Namir is about everything. He's under the impression he's in a gritty morally ambiguous universe where the Rebellion intends to seize power by force out of selfish ambition. He's continually off put by the fact that even when he reaches the officers, all of them are just another layer of would be heroes. It actually makes Chalis the only person in Twilight Company who he understands as she is totally motivated by selfish ambition. Similarly, Chalis believes Darth Vader is attacking Hoth for the explicit purpose of hunting down her because she believes she's a vital resource versus a high ranking accountant.

One of the best moments in the story is when Chalis and Namir are arguing over whether to use Twilight Company to liberate a planet where innocent people are endangered versus taking a strike against the Empire's most important shipyards. There's no obvious answer to which is right but their innate distrust of each other prevents them from doing both. Certainly, Twilight Company could have refurbished itself after liberating the planet and then gone to do its next mission. Neither of them are willing to budge and that makes the story all the better.

The only weakness of the book is the villains, who are incredibly one-dimensional. Prelate Verge is a character that is so immature and whiny that I literally thought he was a twelve-year-old for much of the book versus a spoiled twenty-year-old. I don't buy that some of the Imperial Ruling Council are going to be embarrassing fops (that's inevitable in any royal court). It's just the guy is an imbecile and I don't think those kind of people ever rose above the rank of emissary to a Imperial Advisor. Because at the end of the day, those guys were a dangerous bunch of schemers. Unless Verge is Palpatine's literal son, I don't think he'd have been tolerated. His assistant isn't bad so much as boring, just sullenly fuming about Verge's idiocy the entire time.

In conclusion, this is a really solid book and entertaining throughout. I also liked the canonization of female Stormtroopers with Thara Nyende. While I knew the First Order had Captain Phasma and that meant that the Empire probably did too. It's nice to be see it canonized in print. Either way, if you're looking to have Rebel Alliance idealism tested but triumphant then this is the book to read. It's one of my favorite of the new canon.