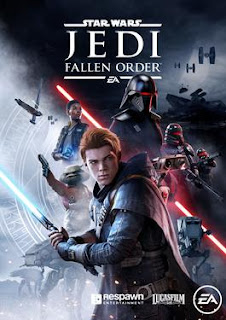 STAR WAS: JEDI: FALLEN ORDER is a game that I have been hesitant to play because of how burned I felt on BATTLEFRONT II. I enjoyed the single player campaign of that guy but felt cheated for the short duration of it as well as the attempt to nickle and dime all of its players. Still, I'd heard good things about this game so I finally picked it up and when I hit a Star Wars mood, decided to play through it. I'm very glad that I did. Despite not being the most original story, it is a solid and entertaining game throughout.

The premise is Cal Kestis is a Jedi Padawan who managed to survive Order 66 while his master did not. As such, he has been junking space ships the entire time. Unfortunately, in order to save his best friend, he has to use the Force and brings down the wrath of the Empire on his head. Barely escaping with his life, he teams up with a Jedi Master that has lost the Force and a professional gambler to try to rebuild the Jedi Order. The key to this is finding the list of all the remaining Force sensitives in the galaxy.

The game is a weird combination of Dark Souls, Uncharted, and Metroid Prime that amounts to being an exploratory platformer and lightsaber game. I was expecting something like The Force Unleashed but it is much more about running along walls, jumping on things, and exploring every little corner in the game. Cal is constantly swinging over things and doubling back to expand his map by knocking down rocks or solving puzzles that he couldn't until he learned the right Force power.

Generally, the game is very fun and while it can be daunting to explore the huge maps and it is very easy to get lost, I managed to get my money's worth many times over. Throwing stormtroopers over the sides of cliffs never gets old. I felt like the parries of the game were a little less than awesome but I had the difficulty turned down very low so I have only myself to blame. Still, I loved it when Cal fought AT-STs, bounty hunters, and the occassional giant monster. Indeed, I wish I'd fought more Imperials because killing the local wildlife made me feel guilty. Jedi are connected to all living things, Yoda-darnit!

When the game is good, it is very good. The opening section on Bracca is fantastic with some fantastic set pieces, a truly amazing train ride section, and the feel of the Star Wars universe down pat. When the game is bad, it feels like you're playing a Jedi themed Sonic the Hedgehog with the only thing missing being a bunch of rings you need to catch. It can get exhausting trying to find your way to the next part of the map when I really just want to fight some Dark Jedi.

The characters are a somewhat mixed bag as Cal, Shera, Greez, and (later) Merrin are all awesome but we don't get enough of them. The Second Sister is a decent villain but I feel like we could have rounded this story out by including an Imperial General or something. We get a theatrical crime lord at one point but he's barely in it. The storytelling is good but could have been expanded, which is to say it's "mostly good."

There's also the not dismissable point that this feels like a plot that has already been done to death I can't count the number of times a survivor of Order 66 or the Jedi Purge in general has popped up out of nowhere to have their own adventures before Vader either kills them or they survive past Endor, Yoda be damned. The fact they're going after a list of children to train to be Jedi also is something that we know is doomed to failure.

The game hints at something more interesting with the Zeffo, a race that seem to be like the Rakata in they were a pre-Republic force sensitive culture that fell to the Dark Side. However, they're just background dressing and I feel that's a missed opportunity. While it wouldn't be terribly original either, maybe looking for an ancient Zeffo superweapon to use against the Empire (or for the Empire in the Second Sister's case) would have been better. Basically, there's a very "been there, done that" feel to the game.

I will give props to the game for being very integrated into the Disney Star Wars timeline. We get references and homages to just about every bit of Star Wars EU up until this point ranging from a Lasat Jedi Master (Star Wars: Rebels), Saw Gerrera (criminally underused), the Prequels, the OT, The Clone Wars cartoons, and even characters from the comics. There's even a call forward to Starkiller Base as we discover just what planet they used to create the First Order's ominous superweapon.

In any case, I played the video game until the end and that is its own endorsement. It corrected one of the big issues of The Force Unleashed with its handling of Vader. Cal never feels too powerful compared to the universe as a whole and is grossly overmatched by a true Dark Lord of the Sith. Also, when he faces an actual Jedi Master fallen to the Dark Side, he only wins because he has the help of another force user. I recommend playing this but with the caveat that there are some long boring sections. I hope in the next game it's not 90% exploration, 10% lightsaber combat but something closer to 50-50.