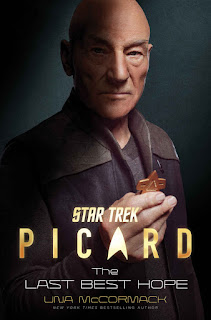 Babylon Five was our last best hope fo...oh wait, wrong franchise. It's actually an Abraham Lincoln quote but that's what the title of this book reminded me of. I should note that I am an enormous Star Trek fan. I am enormous Star Trek fan that is also a fan of Star Wars. I am a double-agent of both franchises and cannot be trusted because I have violated the sacred taboo of loving both. However, I will say how much I love the fact that both franchises are still going strong. While not without its flaws, Discovery was awesome and I was tickled when I got to see Picard. I watched that television show three times.

Star Trek: Picard is a sequel series to era of TNG, Deep Space Nine, and Voyager. It's been decades since Star Trek: Nemesis both in and out of universe with the supernova of Star Trek (2009) forming a major part of the plot. Romulus has been destroyed, the Federation didn't do much to help its refugees, Data is dead, and synthetic life-forms have been banned after the Federation's equivalent of 9/11 that ended up destroying Mars. It's a solid series and while people think I'm criticizing it by saying it reminds me heavily of Mass Effect, I love Mass Effect and enjoyed its complicated plot of secret societies, synthetic lifeforms, and post-War on Terror politics.

There's a lot of unanswered questions about Picard, though, that are primarily the result of how we got from Point A to Point B. As much as I loved the series, I felt like the best possible opener would have been a two part episode that pretty much depicts this book's exact series of events. I wanted to see Admiral Picard at the top of his game, evacuating Romulans by the thousands, and non-sentient synth labor on the verge of automating Federation labor to the point the Singularity was one step closer. I wanted, somewhat sadistically, to see all of that torn down in order to lay the foundation for the events of the show.

This book delivers and more.

I'm a huge Una McCormack fan and consider her Cardassian novel, The Never-Ending Sacrifice, to be one of the highlights of all Trek literature. She had a really formidable task ahead of her with the job of addressing all of the questions that fans of the show had about events. She had to detail the politics of the Federation, Romulan Empire, and the galaxy as a whole while telling an interesting story. In a very real way, this is a novel that consists entirely of running the logistics of a large-scale evacuation. There's no pew-pew and it's almost entirely characterization that show-watchers will know is destined for the mother of all downer endings. The fact she also has to keep track of continuity across movies, series, and a few books makes the task seem nearly insurmountable. Yet, she manages to pull it off.

The very concise and not at all spoilery summary of the story is as follows: The Romulan star is going to go supernova. This is a slight retcon from Star Trek (2009) but simplifies the physics tremendously. The Romulan Empire has an incredible effort ahead of it but is, begrudgingly, willing to let the Federation assist in the evacuation of some of the citizens. Well, close to a billion of them. Captain Picard, overwhelmed with the sheer scale of the problem, reluctantly accepts a promotion to Admiral in order to supervise the effort. This means saying goodbye to the Enterprise but will allow him to do as much good as virtually anything else he's done in his lifetime. Unfortunately, the Federation barely has the resources to evacuate a billion people even if it throws everything at the problem. This is, after all, an organization that lost virtually its entire fleet at the Battle of Wolf 359. Starfleet does not possess the ships to move all the refugees and even if it did there's the matter of finding a place to settle them.

Jean Luc is confidant that everything will work out for the best with sufficient grit and determination. For the most part, he has no real reason to think otherwise. The Federation isn't entirely happy with the Romulan Free State and there are people upset about having to empty their pockets to help a billion "enemy" refugees. However, the Federation is not the people of 21st century Earth nor are the Romulans the war torn refugees we too often turn out backs against. Unhappy as they may be about emptying their pockets, empty their pockets the Federation does. Geordi and Bruce Maddox also set out to find a science-based solution to the infrastructure problems they face as is typical in Trek. There's a couple of scheming politicians and Romulan nasties who stand in the way in the greater good but it's nothing our heroes haven't dealt with before.

But it's all going to go horribly-horribly wrong. The greatest twist of this book is that it is not a twist at all. Star Trek: Picard is based around Jean Luc Picard's greatest failure. Even moreso than being taken by the Borg really. Both times, it's not really his fault but the end results are catastrophic beyond belief. It's essentially that moment when Kirk fails to raise the shields in The Wrath of Khan because he's handled this a dozen times, only a thousand times worse. It's not that the Federation didn't try to do its part, its not that the heroes of the book (using the term loosely with professional creep Bruce Maddox) didn't do their best, it's just that the scale of the disaster is beyond anything that can be dealt with before the supernova goes off. To crib from Babylon Five again, "It was our last best hope for peace. It failed."

I really liked the depiction of Romulus in this book as it doesn't really shy away from the fact it's a totalitarian dictatorship. Trek fans are naturally optimistic but real life has unfortunately shown that authoritarian governments are disinclined to deal in good faith or surrender any power for the benefit of others. The Romulan government would benefit greatly by sharing the data about how screwed they are with its people. They would benefit greatly from not just asking the Federation for help (which they never do, they just reluctantly accept it) but asking everyone else in the Alpha as well as Beta Quadrants. Grand Nagus Rom would only charge slightly above cost, much to the horror of his people. Martok might even lend a shuttle. However, that would mean showing weakness and the Romulan government would rather most of its race go extinct than allow that. Real life shows that this is all too realistic.

If I had any complaints, I would say that I do kind of wish there was a way that this could have been reconciled with novel continuity. That is impossible, though, because the events of Star Trek: Destiny preclude any reconciliation with Picard. The Romulans in the books are also in a far better place alliance and leadership wise than the ones who stupidly lead their people to ruin in the books. Still, I really would love to see how the Typhon Pact would deal with the sudden destruction of Romulus. Another issue is that we don't see how Spock was dealing with the issue or how his use of Red Matter affected things. I like to think he saved countless billions of lives on the Romulan colonies but I think both the homeworld as well as Remus are out of luck. Bruce Maddox is also a creep, as mentioned, and I would have much preferred Doctor Jurati's perspective on all this.

In conclusion, if you have watched Picard then you should read this book. If you haven't watched Picard and are planning to then this is a great book to read beforehand. It's a darker and grittier Trek but not because of the characters. They're as idealistic and good as they've always been. It's just this time it isn't enough. I feel Una also cleared up a lot of mistakes from the 2009 movie and created a realistic (for a bid budget sci-fi universe) problem that is a marathon rather than a race to solve. I could rate this a 4.5/5 for the Bruce Maddox parts and lack of Spock but I'm giving it the whole enchilada because it affected me that much.

Available here
Posted by CTPhipps at 11:02 AM