Psycho Killers in Love is out on Kindle, Paperback, and Audible

I'm pleased to say that PSYCHO KILLERS IN LOVE is available in Kindle, paperback, and audiobook form. It is a prequel to the United States of Monsters series that is set against the backdrop of the 2000 Election. It's an homage to the slasher movies of the Eighties and early Nineties.

Can a slasher and a Final Girl truly love one another? It helps if they have a cult of rich misogynist serial killers to team up against! 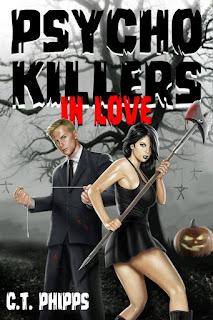 FROM THE BEST-SELLING AUTHOR OF THE SUPERVILLAINY SAGA

What if all the villains of slasher movies were real? What if the movies made about them were just adaptations of real-life killers with supernatural powers? This is a fact known to William and Carrie because their father, Billy the Undying, was one of the worst slashers of all time. So much so that they've spent the past decade in an asylum out of fear they'd end up just like him. Escaping, the two have decided to form a new life on the road. Except, a chance encounter in a dingy diner introduces William to the girl of his dreams.

Too bad she's a girl on a mission to kill all slashers. But maybe the best way to catch a supernatural serial killer is with another pair of them.

Enjoy this exciting prequel to the United States of Monsters books!