Star Trek: The Way to the Stars by Una McCormack review 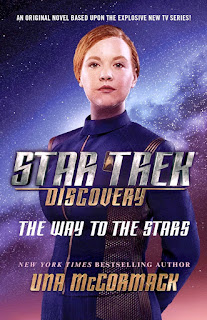 STAR TREK: DISCOVERY: THE WAY TO THE STARS is a Young Adult novel based in the Star Trek universe. I have been enjoying the Star Trek: Discovery spin-off novels starting with Michael Burnham and Spock's adventure in Desperate Hour and continuing in works like Drastic Measures. They're a great mix of Star Trek: The Original Series lore with a new perspective on the life of characters from the 23rd century as well as their culture.This book follows Cadet (later Ensign) Tilly of the show and discusses her backstory prior to showing onboard the U.S.S Discovery.

Tilly is easily my favorite character and is a bundle of bright energetic fun in a very dark show. This story begins with Tilly's sixteenth birthday on Earth and the fact she is the bitterly unhappy daughter of a high-ranking Federation diplomat. Pushed into going to an offworld boarding school she hates, Tilly decides to rebel against her upbringing by running away to the colonies.

Tilly is a tremendously lovable as well as believable character. One thing the book does well is that it never raises the stakes too high in what is really just a story about a teenage girl coming of age. Tilly's idea of adventure is just going on a trip to some non-Earth Federation worlds in what is only about as dangerous as backpacking in Europe during the present day. Sure, she gets robbed at that point but even that crime is not violent.

I've always loved stories about "finding yourself" and Tilly is someone who doesn't want to be a rich society girl but work as a mechanic and possibly astro-mycologist. Not the sort of thing that would be useful in the upper crust of the Federation (that isn't that important in their society but thinks it is). Her mother, Siobhan, loves her but clearly has no idea about how her daughter thinks since she's of the mind Tilly has the makings of a diplomat. Tilly not only has "foot in mouth" disease but doesn't actually like socializing and doesn't really even understand why diplomacy is important.

I really love the glimpse into the lives of Federation citizens during all of this. It's generally a world without want, scarcity, hatred, or prejudice. It's not a world without drama, though, as Tilly's relationship with her mother shows. Personal troubles remain and the differences between generations are universal. Tilly wants to assert herself but her mother is used to seeing her as an extension of herself. I know Gene Roddenberry envisioned humans to be too evolved for the kind of problems Tilly's family have but I feel the book is all the stronger for them being so relatable.

Part of what makes the book so effective is the fact that everyone in the book is genuinely nice. There's no brutish Klingons, scheming Romulans, or mad Starfleet Admirals. The closest thing to a villain is Tilly's overbearing mother, an ornery captain who hates stowaways, and some misguided natives. Tilly's ultimate desire is to also make something of herself and shows that in the future, people really want to do labor for the value of doing it rather than material possessions.

In conclusion, The Way to the Stars is a really good book. As much as I love Star Trek, very few of the books can be said to be relaxing because they're full of explosions as well as high adventure. It's why we go to the Alpha and Beta Quadrants week after week, book after book. This is a very relaxing and comfortable book. Tilly is my favorite Discovery character as I've mentioned and this book is an excellent tribute to her. You don't even need to be a fan of the show to enjoy this nice little "slice of life" science fiction.

Available here
Posted by CTPhipps at 4:54 AM