Interview with Matthew Dawkins about CULTS OF THE BLOOD GODS 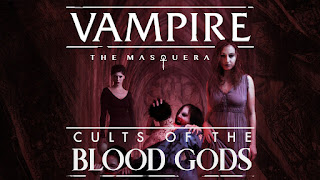 
We have Matthew Dawkins here, line developer for VAMPIRE: THE MASQUERADE at Onyx Path Publishing, and prolific game writer for multiple series. He is also author of new game series THEY CAME FROM BENEATH THE SEA, which is a humorous tabletop roleplaying game line about adapting cheesy 1950s sci-fi ocean monster stories and Red Scare-era fiction.
Today we're here to talk about CULTS OF THE BLOOD GODS, which is a product presently on Kickstarter for the aforementioned Vampire: The Masquerade. After the successful funding of a 5th Edition of Chicago By Night last year, this is a supplement that deals with the cults and weird religions of vampire society. Perfect for Christmas if you're a aging Goth like me. I've already backed for multiple copies to distribute to my friends.
Link to the Kickstarter: https://www.kickstarter.com/projects/200664283/cults-of-the-blood-gods-for-vampire-the-masquerade-5th-ed
1. What is Cults of the Blood Gods?
Cults of the Blood Gods is the first ever religious compendium for Vampire: The Masquerade. It breaks down the biographies, centers of powers, Disciplines, rituals, and all kinds of fun content for a multitude of Kindred faiths. It also acts as the introduction to Clan Hecata, the Clan of Death once known as the Giovanni and previous to that, known as the Cappadocians.
2. Why did you feel that Kindred religion was something to tackle so early in the V5 product line?
It’s one of the building blocks of any society, especially one that’s lasted for millennia and still containing millennia-old members. Theology has always been a source of fascination for me, and as a big fan of Deities & Demigods and Faiths & Avatars for D&D, I felt it high time Vampire: The Masquerade received a similar book.
3. The Giovanni clan and several death related bloodlines are being merged into something called the Hecata. Why is this?
Because times change, and as independence from the Camarill and the Anarchs becomes increasingly fraught with peril, the various clans and bloodlines of death flock together for safety and to achieve a higher purpose. One could even surmise that the Clan of Death were known as the Hecata before they were the Cappadocians.
4. What sort of religions and cults will we find in this book?
So many! Big profiles on the Church of Set, the Church of Caine, the Mithraists, the Bahari, Ashfinders, Nephilim, and Cult of Shalim, and smaller bios for cults such as the Meneleans, the Eyes of Malakai, Gorgo’s Nest, and more! There’s also big sections on mortal cults (and how mortals might follow and worship Kindred, and how those vampires can treat their worshipers), and lots of sample religious with less broad impact on the World of Darkness.
5. Will there be any crunch to be found for our rules-hungry friends?
Definitely. You’ll see new powers for the Mithraists, the Church of Set, the Church of Caine, Bahari, Cult of Shalim, the Hecata of course, and more besides. There’s also new coterie types, predator types, and a way to start using bloodlines in V5.

6. Do you have a favorite religion among the various Cainite faiths?
Probably the Hecata, because I love the ancestor worship, the incestuous nature of the cult, and the structure as a highly functioning yet incredibly dysfunctional family. It’s a cult within a cult. I love the many faces of death and how they interact with each other.
7. Will there be any information for fans of the Ministry (Followers of Set)?
This book presents the Church of Set, which is very much the orthodox arm of the Ministry. Ministers can follow any religion in service of their clan’s goals, but only the Church of Set establishes doctrine and holds any kind of formal rank within the clan. Notably, vampires of other clans can become members of the Church of Set.
8. How about the fans of the Sabbat?
They’ll probably enjoy the Church of Caine, who aren’t Noddists (followers of the Path of Caine from previous editions), but are Gnostics. They’re a different strain of Christianity and Caine worship, in many ways, like real world Gnostics to Catholics, or Protestants to Catholics at the time of the Reformation. You can gain some insight into how faith works in the Sabbat by examining them, though they hate the Sabbat and specifically the Lasombra for what the Keepers did to the Cainite Heresy many years ago.
9. Banu Haqim?
Cults of the Blood Gods doesn’t contain any Banu Haqim exclusive cults, but don’t worry if you’re a fan of the clan: something is bound to show up in one of the upcoming stretch goals that we’ve already hit.
10. Will this be useful for any fans who want to keep using or bring back Roads and Paths of Enlightenment in their games?
Very much so. Paths of Enlightenment are easily constructed using Convictions and Chronicle Tenets in V5, and each major cult in this book has a long list of Convictions provided.
11. Any news on fan favorite NPCs in this book like Isabel Giovanni or the sinister Doctor Mortius (Da Dum!)?
Isabel gets a mention, but she may be going by a different name these nights. Mortius is the silent partner behind the Ashfinder cult, happily letting thin-bloods dabble in undead narcotics while he analyzes the results.
12. One of the stretch goals (already reached) was a supplement called Trail of Bone and Ashes. Can you tell us what that will be for fans backing the Kickstarter?
Four full playable stories with a lot of depth, touching different themes central to Vampire and Cults of the Blood Gods. Just as Let the Streets Run Red covered humanity, the herd, hierarchy, and politics, the Trail of Bone and Ashes will contain stories encompassing faith, perversion, deception, and all sorts of fun stuff.
A second supplement called Forbidden Faiths has also been reached too as I understand it. Let's hope you hit at least as much as Chicago by Night's Kickstarter.
Posted by CTPhipps at 4:02 AM