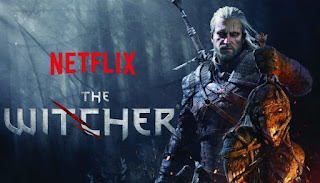 The Witcher is a series that I learned about from CD_Projekt Red the same as many other Western fans. We played the games that were non-canonical Expanded Universe sequels to the books well before the books became available in the English language. I've read those as well and was excited about the Witcher series being based on the original Andzej Sapkoski stories.

However, after Game of Thrones, I had the worry that the series would be as schizophrenic as the latter seasons. Very often, television programs invent new stories to fill time for actors and these are often the weakest parts of the story. So is The Witcher any good? Yes, as long as it's following Sapkowski's material. It goes off the rails every time it deviates.

The premise of the series is that Geralt of Rivia (Henry Cavill) is a mutant monster-hunter. Witchers are pariahs in society despite their usefulness and must wander from town-to-town, killing for coin. Geralt is an apparent cynic who is actually a frustrated romantic. He hates the cruel, corrupt, and venal Medieval society he lives in. Accompanying him on his adventures is Jaskier (Joey Batey) who is a bard that has decided to latch onto Geralt in order to make his legend (as well as Geralt's).

In addition to Geralt's adventures with Jaskier, there is the story of Yennefer of Vengerburg (Anya Chalotra) who is a deformed young woman who discovers immortality and power at the mere cost of the life she could have had before. Rounding out the protagonists is Ciri of Cintra (Freya Allan), a young princess who witnesses the extermination of her kingdom and finds that her family was hated as tyrants.

The first season is a rough approximation of the first two Witcher short story collections, The Last Witch and The Sword of Destiny. The parts that star Geralt are the best parts of the series and the most faithful to the original stories. They adapt "The Lesser Evil", "The Edge of the World", "The Witcher", "A Question of Price", "The Last Wish", "The Bounds of Reason", and "Something More" quite well. The only story that gets mutilated is "The Sword of Destiny" (the story not the collection) where Geralt was a major player but doesn't even show up.

The biggest alterations are expanding on Yennefer's backstory and giving a completely new series of adventures for Ciri to engage in. In the Witcher short stories, it's mentioned that Yennefer was a deformed young girl that had her body repaired by the Brotherhood of Sorcerers only for her to be sterialized by her mentor Tissaia (MyAnna Buring). She spends decades after mourning the lack of a chance to be a mother and working to discover a way to achieve it.

Here, we see her sterialization is a result of her magical plastic surgery and it undermines the character of Tissaia a bit. In the books, she believes in the supremacy of magic above all things and that women should not be distracted by mundane concerns like family (showing her internalized misogyny and callousness).

Tissaia is also shown to be leading the resistance against Nilfgaard, which is the opposite of her book persona where she believes mortal governments are another distraction from the brotherhood of mages (that no other mage subscribes to). Yennefer also seems more ambiguous about her desire to be a mother, which seems like it's an attempt to not make her seem weak but actually achieves the opposite of making her not know her own mind. Yennefer is many things but indecisive is never one of them.

There's also a weird attempt to grimdark up some of the stories. The Last Wish and The Sword of Destiny are somewhat humorous collections despite seriously dark moments. The show adds some horrible villainy to characters like Calanthe (Jodhi May). She's inexplicably shown to be engaging in pogroms of elves for no reason. We also have the Brotherhood of Sorcerers turning failed candidates into eels.

Ciri's adventures are the weakest part of the narrative as she basically wanders from tent to forest to tent to forest on a pointless joirney that tells us very little about either her character or her relationship with her mother. We see none of the snarky young badass-in-training that we'll see in the later books. Basically, she's an obnoxious child and that makes her much more entertaining than the mostly silent one we meet here.

Henry Cavill does a surprisingly good job as Geralt and I admit this is probably my favorite role of his. He seems to basically go between channeling Clint Eastwood and Doug Cockle (the game's Witcher) but the Man with No Name was the inspiration for Geralt anyway while the other is well-beloved by gamers. I never quite completely bought him as the character but he did at least achieve the "famous actor I recognize doing the character I like" that Tom Cruise and Lestat did. I was entertained and enjoyed his work greatly.

Anya Chalotra's Yennefer was exceptional and despite the fact her original material was weaker than Geralt's stories, I felt she did an excellent job. So much so that I felt that were this an original series, I'd still be watching it for her. She's also a great beauty and while the sheer amount of nudity on display is gratuitous (she seems like to casting spells topless for some reason), its a small distraction from serious acting chops. I've seen some people complain about the fact a biracial woman was cast in the role but phooey on them.

The action is good, the special effects are excellent, and the writing (the original writing that is) is great. It's just when they color outside of the lines of Sapkowski's original work that I think the show suffers.