Hello, my fellow creatures of the night!

This will come as no shock to people visiting my blog and seeing the hundreds of vampire, werewolves, and zombie media reviews but I am a big horror fan. A large part of that comes from my experience in high school and college as a tabletop role-playing gamer. During that time, when I was a gentle wannabe Goth soul, I was a big fan of Vampire: The Masquerade. 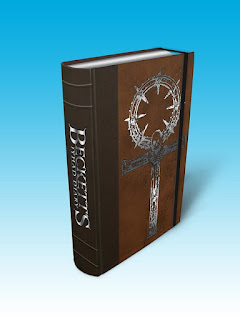 Onyx Path Publishing has decided to supplement this release with Beckett's Jyhad Diary, which is a book that roughly updates and streamlines the entirety of the Vampire: The Masquerade metaplot as well as gives a rundown on all of the major cities as well settings from its decades long run. It is a half-novel, half-supplement with its framing device being the diary of vampire archaelogist Beckett wandering the world in order to unearth the undead's mysteries. You can visit or donate to the supplement's Kickstarter here.

I was definitely interested in this book and doubly lucky when Matthew Dawkins a.k.a The Gentleman Gamer and a developer of this book agreed to do a interview about this book. If you haven't checked out The Gentleman's Guide to Gaming Youtube channel, I suggest you do. He helped me get back into Vampire: The Masquerade (at a ripe old age of 35) and has some wonderful insights into the way the setting works.

1. Could you tell us a little about yourself and your relationship with Vampire: The Masquerade?

I started playing Vampire pretty late in its original run, around 2000 or 2001, though I was already reading the books from around 1997 or so. I've always been a keen roleplayer, and no game has caught my interest so strongly as Vampire. I love the lore and hold an encyclopedic level of knowledge about the game in my head, for some inexplicable reason. I guess I immersed myself in it once I was in a position to run it, and that immersion has never really stopped.

2. How did you become involved with Beckett's Jyhad Diary?

Neall Raemonn Price and Eddy Webb asked if I would be happy to write for the book. I wrote a substantial portion of it, and took on the developer role around halfway through. The book became bigger than a single developer, and required my eyes, my revisions, and my direction. That's not an arrogant claim - this is a massive book of lore, and it's one hell of an undertaking. Thankfully, it's one I enjoy a great deal.

3. Could you tell us a little about the book and what purpose it will serve storytellers and/or players?

Beckett's Jyhad Diary is a mammoth book of lore, setting, characters, metaplot, and Storyteller advice for incorporating all these things into your chronicle. It has something to offer new players, as an introduction to Vampire's rich setting, and something to offer old hands, as it contains hundreds of call backs and easter eggs referring to old plot threads from every edition of Vampire. You shouldn't need any other book in order to "get" the Vampire metaplot.

4. Beckett's Jyhad Diary picks up a lot of characters, plots, and cities which haven't been touched on for decades in a couple of cases. What were your favorite elements you liked seeing a return to as a fan and/or writer for this?

I suppose my favorite cities to retread were Milwaukee and D.C. as I was a huge fan of both these city sourcebooks. Honestly, I enjoyed writing every chapter I contributed to this book. Being able to put a voice to Milwaukee characters like Jacob / Esau, and having an opportunity to write dialogue and action for characters I loved from the novels as Marcus Vitel, Talley, and Anatole, really was a thrill. I'm also pleased to have furthered the Giovanni Chronicles with a form of Giovanni Chronicles V, in the form of the Venetians Blind chapter.

5. Was there any particularly obscure piece of Vampire: The Masquerade lore you enjoyed seeing in the book (or putting in)?

Well I don't want to give too much away, as I think part of the fun of this book will be readers connecting the dots from old sourcebooks to this one. So this character referenced in this chapter first appeared in this obscure sourcebook, and so on. I think that's one of the things I've enjoyed so much. Very few of the characters we've introduced in this book are original. That sounds bad at first, but in truth, we've harvested these characters from sourcebooks, novels, video games, V:TES cards.. all kinds of places. I suppose to conclude, I think of all the little references added to this book, and would probably choose an off-hand reference to the Sword of Nul as my favorite piece of obscure trivia.

6. Fans have been clamoring for a Chicago by Night V20 edition, Los Angeles by Night V20 Edition, or updates on other cities and settings. Will Beckett's Jyhad Diary satisfy all of those needs or will still possibly see those in the future?

I'd love to see either of those books come to light. This book goes some way to expanding what we see the situation like in cities such as Chicago and L.A. following the 2nd edition sourcebooks, but I can definitely see the merit to a full update. We shall have to see what comes up on the schedule!

7. Beckett is obviously the signature character and focus of the Jyhad Diary. What makes him a good character to build a focus of a book around?

Beckett is a cynic, and he defies his Clan stereotype. He's a scholar and an insufferable asker of questions. He's the perfect narrator, both for his humor and his candor. He's as incredulous as the reader, which helps, as when Beckett encounters something he attempts to rationalize it before just buying what he's being sold. I think Beckett is a perfect set of eyes for a reader.

8. Do you have a favorite signature character who shows up in the supplement?

So many excellent signature characters! I think we actually use every single one, at some point or other. Personally, I was really happy we used Veronique d'Orleans from Dark Ages: Brujah. In terms of Masquerade, it would have to be Hesha Ruhadze, who shows up a few times. He's proof that Setites are not all ravening drug dealers and pimps. [Note from Interviewer: Hesha is my favorite signature character too and that's pretty high praise given Lucita exists.]

9. The metaplot of V:TM was a much-loved and sometimes much-disliked element of the original game. Will Beckett's Jyhad Diary advance it or simply set it up as the new status quo for the V20 setting?

The entire book is about metaplot, which though a historically controversial element, has also proved to be one of the most popular parts of Vampire. A lot of people complained about its existence around the era of Revised, and then complained about its disappearance with Requiem. People are funny like that. That said, we do further the metaplot in small, subtle ways in Beckett's Jyhad Diary, but mostly we expand it. The difference is that where - with Masquerade - the timeline was always moving forwards, we're setting V20 in an era-agnostic period.

We can't therefore say that "the Setites were once Independent, but now they're in the Camarilla," but we may be able to say "the Setites are considering cashing in their invitation to join the Camarilla due to changes in the Fire Court," or the like. We want to open up uses of the metaplot that may have not been considered previously. Present the world with which many players are familiar, and say "did you know you can do this with it?"

Beckett doesn't push the Assamites into schism. He doesn't make Carna rebel against her Clan. He doesn't set up the authoratitive Primogen Council of Chicago. He doesn't kill Melinda Galbraith. But, he witnesses these things, or speaks to those who have. Why? So Storytellers and players can incorporate these plot elements in their games and put the players' characters in the forefront. Consider Beckett an eye-witness reporter in a warzone. The players' characters are the soldiers and civilians at the heart of the conflict.

10. You've released some magnificent chapters to the public so far, dealing with Chicago, the Anarch Free States, New York City, the Assamites joining the Camarilla, and now London. Can you tell us other areas and groups which will be touched on in the future?

Luckily, the Table of Contents up on the Kickstarter covers the other chapters in brief. Beckett travels from Germany to India, and Transylvania to Mexico City, Hong Kong to Haiti, and all kinds of places in between. He encounters elements from pretty much every previous sourcebook. From Diablerie: Britain to Cairo by Night, and Nights of Prophecy to the Transylvania Chronicles. There are no depths we have not plumbed. I cannot expound enough on the sheer range of plot threads this book encompasses.

11. Will there be any retcons to previously established lore? Ur-Shulgi seems newly arisen from the Assamite sample chapter, for example.

I don't believe we've retconned anything, though we may have described situations apparent in previous books, albeit from different perspectives. Oh, I suppose a rather prominent dead Prince is now up and kicking around again... Regarding Ur-Shulgi - his recent rebirth is due to the era-agnostic nature of the book.

Beckett describes his travels as in a random order, across a course of years. Ur-Shulgi may have woken up 15 years ago or yesterday in your chronicle. Ultimately it's unimportant to us to define the date the Assamite Methuselah arose from torpor, but that allows you as a Storyteller to place his awakening in your chronicle, and the Assamite political situation at the forefront, rather than saying "well that happened two decades ago, so we have to have it as historical in our chronicle set in the present day."

12. How has fan response been so far to the Kickstarter?

Fan response has been excellent. Vampire fans are among the most passionate roleplaying game fans out there. I attribute that to Vampire's massive cultural influence throughout the '90s. It left an indelible mark on a lot of us, and we care for the property. That said, we can always do with more fan engagement so we can hit even more stretch goals and incorporate yet more chapters into this already sizeable tome. If you're reading this, please consider sharing a link to this interview and the Kickstarter. Beckett will love you for it.

13. What's it been like working on this for a longtime V:TM gamer?

Working on this book has been utterly fantastic. An experience like no other. I've worked on many books now, and even developed a couple more, but my heart belongs to Vampire. To have contributed so much to this book, I feel so proud of its quality, utility, and beauty. The art rolling in is magnificent. I love being able to see the art that our artists produce based on the words we write. I love seeing the fans engage, and ask questions about the content. It means we're sparking their creative interest, and there are few higher compliments. I enjoyed working on Beckett's Jyhad Diary, I will continue to enjoy working on it as I write or develop the stretch goal chapters, and I look forward to working on more books for Onyx Path Publishing.

Thanks Matt!
Posted by CTPhipps at 4:07 PM