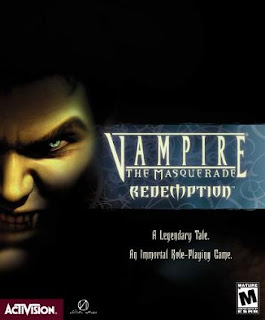 Vampire: The Masquerade: Redemption is an old game but it's still a reasonably fun one seventeen years after its release and I thought I'd share my opinion on it. It's basically a 3d combination of Baldur's Gate and Vampire: The Masquerade: Bloodlines with the latter being a game built from the choices made in this game's design.

If I were to make a more modern comparison, it's what you get if you combined Dragon Age with vampires then set half of it in the Modern Nights. Which is awesome, don't get me wrong, but a very avante garde choice. The game was something which didn't quite feel like it had the feel of Vampire: The Masquerade down but it wasn't for lack of trying and there's definitely a lot of love for the setting inside.

The premise is Christof Romuald (Nicholas Guest) is a Crusader wounded during a battle with the local pagans. He is promptly abandoned by his fellows since his recovery will take weeks (if ever--Medieval medicine for you). Christof is nonplussed by this, even if he is being treated by the beautiful nun Anezka for which his feelings are not entirely holy.

Deciding to slay a local vampire hiding in the caverns despite his injuries, he is victorious and becomes the Hero of Prague. Unfortunately, the local vampires take notice of his skill at defeating a much more dangerous foe and decide to transform him into a weapon against their enemies. Things promptly get worse from there as he spends every waking moment of his nights from then on trying to get back to his beloved Anezka.

I love Christof Romuald despite myself as he's a character with personality to burn that works wonderfully in the game. Basically, his entire thing is he's trapped in the wrong genre. He keeps playing the role of the Lawful Good Paladin and stereotypical fantasy hero in the World of Darkness and the results are hilarious. No one knows what to make of him and his protagonist ability to **** up shit well above his weight class throws everyone for a loop.

Christof is a bit of an annoyance at times because he's technically supposed to be an RPG character but pretty much follows the same source of action no matter what. It's kind of irritating because I found both Serena (Tara Strong) and Lily (Christine Burke) to be much more interesting love interests for Christof (and they respond in kind) but he's mono-focused on Anezka. I also felt Christof would want to spare Anezka the Embrace but the "Good" ending requires it.

The game is compensated a LOT for its deficiencies by the cast. There's a bunch of extremely memorable characters ranging from Ecaterina the Wise (Mary Elizabeth "Motoko Katsuragi" McGlyn) to Serena to Lily and the Vukolodak. I'm also a huge fan of Pink, who is basically the most stereotypical British Brujah punk you could imagine and who works wonderfully as a contrast to Christof. All the characters play off each other well and if there's a few characters I'm ambivalent about, I still have none I disliked.

Combat in the game is a bit counter-intuitive and clunky with the fact this is an RPG being very very clear. If you want to destroy the big monster in the silver mines, for example, you had damn well better use holy water even if vampires are mostly immune to it in the source material.

Quite a few of the stats are completely useless and if you want to play the game, ignore social ones and focus exclusively on combat abilities. There's no new dialogue options or opportunities to avoid combat in this game.

Indeed, the game's focus on combat kind of undermines its World of Darkness roots. If we take Christof's adventures as literal, he ends up killing roughly a third of the vampires in Europe. As a long time Follower of Set fan, I also felt the depiction of them in this game approached malicious slander. Still, Followers of Set Revised hadn't come out so they were treated as a bunch of Thulsa Doom rejects anyway.

The villain, the Vukodlak is extremely one note and I had difficulty getting around the fact I was supposed to getting in a hand-to-hand fight with a 5th generation Methuselah who is apparently strong enough to destroy the Antedeluvians. Maybe God or Troile was on Christof's side or he was weak from Torpor. I dunno.

Like I said, I also felt Anezka really didn't do anything for me and her romance with Christof had all the depth of Link and Zelda. Albeit, this game's Zelda goes through some serious **** so I can't be too hard on her. There's also a few other smug and hateable villains I came to enjoy killing.

In conclusion, Vampire: The Masquerade: Redemption is a fun sort of game. I think it has a lot of silly 90s cheese and is way too combat heavy but it's overall a lot of fun. It's a game which would have benefited from a remake or reboot I think.