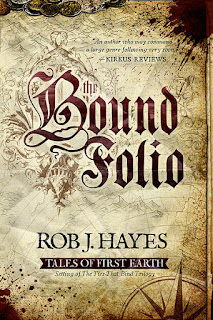 Rob J. Hayes was my introduction to grimdark fiction. Well, actually, no, it was George R.R. Martin but saying, "He's the guy I first read that I realized was grimdark fiction after I read the books everyone else read and loved" is not a very good opening for a review. Hayes wrote The Ties That Bind trilogy which is best described as what you get if you combined Quentin Tarantino with Conan the Barbarian.

Rob J. Hayes style is to get a bunch of foul-mouthed quirky oddball murderers, criminals, and complete scum with a couple of sympathetic qualities then set them loose on something very similar to the Hyborian Age.Much like Quentin Tarantino himself, Rob J. Hayes' work isn't for everyone as the majority of characters are irredeemable but they're entertainingly irredeemable. The good will suffer, the bad profit, but the truly evil will probably get themselves killed in a dreadfully grand guginol fashion. This is the embodiment of grimdark to me so I was eager to plow into an anthology collecting the stories of minor characters from his trilogy.

So, what did I think?

The Bound Folio is everything I expected it to be with a dozen short stories chronciling characters both virtuous and heinous. You can always tell which are the most moral of the cast as they're the ones who are going to suffer most. Some of the stories are prequels to characters from his upcoming Best Laid Plans series which leaves their tales open-ended but most of them, thankfully, have a coherent beginning, middle, and end.

Fair warning: horrible stuff happens in this book with no apologies, remorse, and a maniacal glee from the author like some sort of evil god but it's usually to the greater service of the story. This is hard R fantasy and that's what you should expect when reading this man's works.

"The Sword of the North"

Master swordsman and aristocrat Derran Fowl has a sickly sister who often makes pointed observations about her family. When she makes one too many notes about her father, he summons the Inquisition to investigate her for witchcraft. There is no good ending for the Sword of the North as he makes a bold but fool-hardly plan to rescue her.

This is probably my favorite short story of the bunch as the characters are realistic and the situation gradually goes from a generic seeming fantasy tale to one of a nightmare. The ending was particularly powerful as while it promised future stories, it also served as an excellent critique of heroic narratives.

"A Game of Poisons"

Two fabled assassins are hired to kill one another as part of a test by a rich client. Unfortunately, for him, the two have more in common with each other as seasoned professionals than they do with the fool who hired them.

This is probably the most Tarantino-esque of the stories with two hardened criminals taking a moment out of their day to shoot the breeze before getting down to the old-fashioned ultraviolence. I liked both of the characters and felt the ending was appropriate in a set up which could have gone either way.

An urchin living at the bottom of the social ladder finds himself in a position to better his fortunes, if he's capable of casting aside any lingering humanity or loyalties in the process. This is a story which I enjoyed even if I had mixed feelings about it. It does a great job, however, of showing you just what a dog-eat-dog setting this place is.

"The Battle of Underbridge"

A pair of squires are just trying to get drunk and laid one evening when they find themselves on the wrong end of an invasion by the undead. I liked this story because it's from the perspective of people just trying to survive a fantasy battle against utter evil than actually doing anything about it. It also reminded me just how bad and twisted magic was in this setting.

An old fashioned vengeance narrative. Sirion Tell finds out his father has been fencing goods for pirates and when he tries to get out of the business, finds himself and his wife hideously wronged by the pirate Drake Morass. A warning that this story contains sexual assault, albeit nothing graphic.

I really liked this story as Sirion Tell finds his vengeance disgusting and horrifying rather than satisfying but still tries to get it because it's the closest thing to justice which exists in this world. Watching him try to play the part of the cold-blooded badass while being just a man mourning his wife is entertaining yet moving.

Interesting, Drake Morass is the protagonist of the upcoming Where Loyalties Lie, despite this and the third book of The Ties That Bind establishing him as he's a less redeemable character than Swift.

"By My Life and My Bloodline"

A pair of half-human children try to live normal lives in a world where both sides of their race want to destroy them. This is a story which, sadly, only seems to be getting started when it ends. I am, however, intrigued by the mythology which is talked about and look forward to reading more about it in the main story.

"You Never Forget Your First Time"

Shian is training at the school of mistresses to become a high class courtesan. Hating her teacher and wanting revenge, she decides to seduce her husband in order to gain some measure of revenge. Unfortunately, this runs into some cultural taboos the girl from the desert is unaware of. This is very different from the other stories in the book and yet the ending makes it all the better.

A straightforward adventure where an Arbiter of the Inquisition finds themselves captured by pirates then recruited to recover an ancient book. This doesn't have the twists or turns of previous stories but is still very entertaining. I also love both characters who will show up in Where Loyalties Lie.

In conclusion, if you're a fan of Rob J. Hayes' work or this will be your introduction to it, I strongly recommend this anthology. It's not the best fantasy anthology I've ever read (that's Blackguards) but it's still damned good and a good appetizer for the upcoming Where Loyalties Lie.