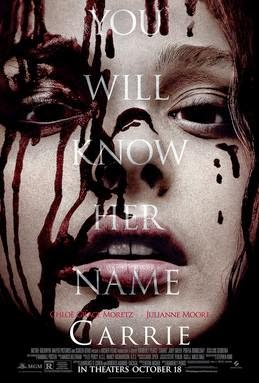 I think of the 1976's Carrie as one of the best horror movies of all time. The book version is almost as important to scary fiction but only in the context that it helped launch Stephen King's mega-prolific career. I'm one of those horror-heathens who believe Stephen King is as often as not improved on by translations to the silver screen with Carrie and The Shining as my chief proof.

So what do I think about remakes?

Remakes are often very bad. It's a tired truism that people often take classic movies, suck out all of the fun from them, then try to coast on their success to achieve a limited amount of their popularity. I'd list some of the absolutely dreadful remakes out there but I really only have to list one that shows how direction and acting are as important as writing or even shot-adaptation.

The remake was dreadful, despite being a shot-for-shot remake. So, what does this mean for Carrie? Well, it means I was cautious. Carrie has been remade before and even had a sequel to the remake despite the original story having one of most definitive endings in the history of cinema. For those few people who aren't familiar with the ending of Carrie and which the cover art spoils of this movie, Carrie is ended about as finally as Hamlet.

Yet, I decided to watch the remake anyway. So, what do I think?

In fact, I would go to say it's good-good and an excellent gateway drug to horror. For those of us cursed with family who are not (yet) into the blessed genre of horror, Carrie (2013) is probably a better film to introduce them to it than trying to get them to appreciate how awesome the original is. Hell, my wife loved Carrie (2013) and she hates horror with as much passion as I love it--and one look at my tag list will tell you that's a lot.

The production values are higher, there's more recognizable stars (excepting one--you know which), and the characters are more likable. The latter two are going to stick in the craws of discriminating horror aficionados (read: snobs) as I can already hear quote-unquote purists saying, "famous people distract from the immersion of the original movie" and "it's a story of alienation, why make the characters more likable?!" I'm not going to dignify the first one with a response but the second one actually deserves to be analyzed at length.

Mostly, because it's the only real change-change they make in the movie.

Carrie (2013) is an extremely faithful remake of the original movie and novel. A young girl raised by her mentally-ill fundamentalist mother is abused by her classmates and life. Eventually, one of her tormentors takes pity on her and tries to set her up on a date with her boyfriend for prom.

This strikes Carrie's chief tormentor as a perfect opportunity to play the cruelest prank ever. Which would be bad enough but not dangerous if not for the fact Carrie was developing telekinetic powers. The kind which, in a kinder universe, would get her picked up by Professor Xavier.

Or hell, even Magneto.

Chloë Grace Moretz plays a Carrie who is sheltered, abused, and unhappy but not broken. The movie takes pains to make it clear that Carrie just needs perhaps a friend or two to get through the hells of high school until she's eighteen and can get out of her mother's control. With the only barest hint of water poured on her wilting flower, she turns into a beautiful rose. Which makes what happens later all the more tragic.

Audiences perhaps should not sympathize with Carrie's actions as much as they do (especially given applicable RL incidents of violence) but they always do. Here, it's damn near impossible NOT to be totally on her side right up until the end--Chloe's Carrie is just so adorable. Her performance is so affecting you don't mind that the unpopular bullied girl looks like Scarlet Johnansen probably looked when she was fifteen.

Judy Greer as Miss Desjardin is another character who is significantly nicer. The original didn't actually sympathize with Carrie, she just pitied her and was a little bit irritated by her personality. Here, the gym teacher is actually trying to reach out and mentor the young woman. Like most such interventions, her attempts to help backfire, but you can tell how much Carrie appreciates her. Also, Judy Greer is ****ing awesome and I dare anyone to say otherwise.

Even Carrie's mother as played by Julianne Moore is someone who is hard to hate. The source of her unease is more less obviously religion and more obviously the fact she seems to be an undiagnosed case of severe bipolar disorder.  Throw in the fact she seems to have been raised in a misogynist household as well as a fundamentalist one (and there is a difference--albeit there's plenty of places they overlap) and you get a woman who hates herself every bit as much as Carrie. Only, poor Mrs. White let's that raw self-hatred pour onto her daughter.

There's a moment when she receives praise for her sewing work which shows, if it had happened earlier, Mrs. White might have lived a normal life too--presumably with a lot of medication. This humanization of a formerly Dursley-esque level of villain is most welcome.

About the only character who isn't humanized is Portia Doubleday's Chris. She's almost always been a complete psycho in these movies along with her boyfriend but 2013 takes it up to the 11--combining the self-entitled asshattery of the 1%, teenage entitlement, and what appears to be a genuine case of sociopathy-in-the-making. Even then, we don't cheer what happens as there's a bit of visual shorthand about the abuser and the abused not being so different.

In short, everyone is just a wee bit less creepy than in the original. This has an effect of diminishing the horror but upping the tragedy. Carrie White's hometown is not some creepy village near Castle Rock but a living place in the 21st century. This could happen anywhere and that's a good choice by the filmmakers. Is it as good as the original? From my snooty-perspective? No. It's very good, though, and helped wash the bad taste from the last remake from my mouth.

Buy at Amazon.com
Posted by CTPhipps at 2:27 PM