Star Trek: How Much For Just The Planet? review 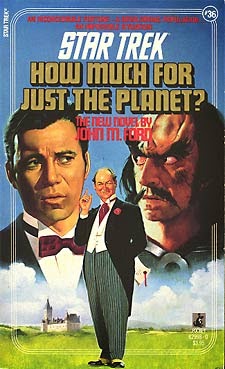 A pallet cleanser for me as I get off horror for a bit to do a flashback to the funnier days of the Star Trek franchise. Well before the official Star Trek Expanded Universe was established in 1987, How Much For Just the Planet? was released to mixed reaction. Why? Because it's to Star Trek what Monty Python and the Holy Grail is to Arthurian lore.

Oh, don't get me wrong, this novel is about as substantial as a vanilla wafer but sometimes that's what you want from a story. Not everything has to be The Wrath of Khan (despite attempts by movie makers to do so) or The Undiscovered Country. Here, it's just a bunch of ludicrous situations the Enterprise crew is forced to confront. Even so, the book makes a few wiry points about moral equivalence, imperialism, and empire-building.

The premise of the book is the Klingons and Federation have signed a treaty thanks to the events of "Errand of Mercy." For those unfamiliar with said episode, godlike aliens forced both empires to cease their aggression against one another under threat of mutually assured destruction. Furthermore, the Federation and Klingons would be allowed to expand only if they demonstrated themselves better equipped to colonize or develop worlds along their borders.

This is problematic as, on the planet Direidi, they have no desire to part of either the Federation or Klingon Empire. This would be fine if not for the fact the planet is more or less one gigantic ball of dilithium crystals. Even in 1987, it's hard not to see the parallels over oil. Of course, mining "less developed" nations for resources goes back to when men with iron-spears were dominating those with bronze ones. That it's happening in the enlightened future of Gene Roddenberry doesn't bother me at all.

Some habits are hard to shake.

Captain James T. Kirk and company thus set out to planet Direidi in order to convince the locals to side with the Federation for their own good. The Klingons also send one of their best ships to do the same, albeit with slightly less doubletalk. The book goes out of its way to show the two sides aren't that different, up to and including replicators producing strangely colored food. It reminded me a bit of some bits from the Illuminatus Trilogy.

What could have been played as a serious drama, however, is portrayed as a farce. We've already had the moral equivalence of Klingons and the Federation done before, in "Errand of Mercy" no less, so beating that drum wouldn't add anything more to the franchise. Instead, we have love-triangles and musical numbers plus an all-consuming milkshake threat.

Some of the humor falls a little flat and a lot of the in-jokes are going to fly right by you if you're not familiar with some of the authors he pokes fun at. Still, it's an enjoyable little romp and something I can hardly call a poor edition to the franchise. Star Trek takes itself way too seriously sometimes and it's fans do the same.

There's really not much to talk about plot-wise because the plot exists to do a series of sketch-scenes and running gags which carry on from one chapter to the next. It's a bit like the Hitchhiker's Guide to the Galaxy in that respect but without Douglas Adam's sense of cosmic horror used for absurdest comedy. This is a far lighter tale and not as funny but it's still very-very funny.

Which is all it wants to be.