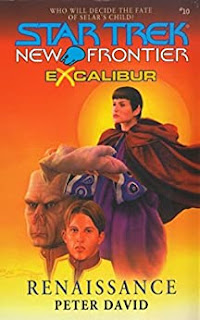 Basically, this continues the three-book Excalibur plot that follows the crew as they're separated from each other by the events of Requiem. In this case, it is Burgoyne, Doctor Selar, Robin Lefler, her mother, and a certain part of Thallonian royals. I'm not actually a fan of the crew being separated like this and feel like it should have been one big huge book but this came out in 2001, so I'm not exactly in a position to complain.

Part of what I like about the book, though, is that it does tackle very un-Trekkian sort of things like a custody battle with Burgoyne and Doctor Selar. Frankly, it hasn't aged well as a plot, though. In addition to Burgoyne sexually harassing the Doctor for the first few books, their desire to involve themselves in the life of a child conceived during Pon Farr that he has only a biological link to hasn't exactly aged well.

Basically, I'm going to be blunt that I think the relationship between these two is probably my least favorite part of New Frontier as a whole. I never liked the two of them together and they sort of make each other look worse, even with child on the way (especially with a child on the way). Which is a shame because Bugoyne is a character that has become more relevant with the introduction of non-binary people.

Really, though, the best part of the book is definitely the Risa story. I don't know what it is about Risa but I find it a place where some of my favorite Star Trek stories are set. Yes, even the one where Worf becomes a terrorist. I think it's just the juxtaposition of the fact there's a vacation planet and everyone loves this world with the fact that it is apparently also a place no one can ever get any decent vacation time in. Perhaps also the fact that the utopian Federation is so nice that you kind of wonder why a vacation planet even exists.

Mind you, I hope what I heard that Risa was based on Hawaii isn't true, though. Because, really, tourism is such a colonialist awful influence on that island and its natives that it becomes in incredibly poor taste.

But the real appeal of the book is SCOTTY! Yes, James Montgomery Scott himself, now tending bar on Risa and enjoying his retirement in a way that I think sounded a lot better than him going off to a nursing home planet. Certainly, it has a lot more dignity and the fact that "Relic" suffered from a lot of ageism (the idea that old people didn't have anything to contribute in a futuristic world) was a pretty awful one. Here, at least, I think he's having fun and while I'm glad later books put him back in engineering, I think being a bartender isn't the worst thing he could do in his elder years. It's a shame he and Morgan Primus didn't hook up, though.