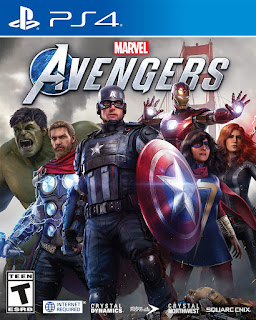 MARVEL'S AVENGERS is a game I have very mixed feelings about. Indeed, I can't think of a game I've had more up and down thoughts about other than possibly Cyberpunk 2077. The difference is that Cyberpunk 2077 was a game that I very much enjoyed playing despite the many bugs as well as crashes. Marvel's Avengers wasn't as unplayable as Cyberpunk 2077 but the core game was also a good deal more boring. So, yes, this is going to be a harsh review for the game and this is after the game has had extensive time to debug and improve itself.

Normally, I would focus on the single-player campaign for the majority of my review but I actually have to focus on the whole game before I get into that because it's clear that Square Eidos wanted to make a Destiny-clone instead. The game is built as the skeleton for what seems like was planned to be an MMORPG-style live service that could be played forever.
Unfortunately, this really doesn't have the kind of juice to be able to be another Destiny. Say what you will about Destiny but it is fun to play and extremely easy to understand the basics of the game. You shoot things, you use your special ability, you gather loot, and you team up with your friends to shoot more things in more complicated environments. The system is integrated into the story and there's a wide enemy variety across multiple factions.

Marvel's Avengers fails at practically all of this. You have a limited number of superheroes to play and all of them are insufficiently leveled at the end of the single player campaign except maybe Ms. Marvel (good for me as a Ms. Marvel fan but I think most other people prefer other Avengers). There's really only one faction to fight in AIM with a staggering lack of colorful bosses to fight. Finally, looting is just plain dissonant with the Marvel license since they only can pick up armor and that doesn't change their cosmetic appearance. The enemy variety in this game is just terrible with AIM robots, Watch Dog hate group members, and more AIM robots.

Seriously, this game's lack of ambition for a live service is actually more irritating than the fact its designed as a money sink in the first place. I mean, if you're going to make Marvel's Avengers then the very least you can do is insert Hydra, Chitauri, or the Kingpin's goons into all this. It's obviously not the Cinematic Universe, inspired as it may be by it, so there's nothing stopping you from making use of everything else to make the world more colorful. I mean, I like AIM, but they can't carry the game by themselves.

Indeed, one of the biggest weaknesses of this game is the fact that there's not a Marvel's Alliance number of bosses throughout this thing. There's MODOK, the Abomination, a disguised Loki, Taskmaster, and Monica Rappacini. I like Monica but she's not exactly someone I would put on my A-list of baddies to fight the Avengers in their game. I remembered playing the Avengers arcade game in the 90s and that had the Living Laser, Sentinels, Red Skull, Mandarin, Whirlwind, Ultron, and dozens of others.

Now getting onto the single-player campaign, the funny thing is it's actually pretty good. I feel like I would have liked it as a Ms. Marvel solo game and given it a pretty good props. Unfortunately, it's not a very good Avengers game even if the story is fine. Yes, just fine. The premise is basically the comic book version of Civil War mixed with the X-men. Well, bargain basement version of Civil War and the X-men.

The Avengers get blamed for a disaster that kills thousands, are disbanded, and the protection of the world is taken over by AIM under the leadership of Doctor George Tarleton (the future MODOK). AIM builds an army of robots and starts hunting for the Inhumans that were created by the malfunctioning Terrigan reactor that the Avengers were blamed for the destruction of. It's a bit of a rehash but having the bad guys take over the world at the start of things is a pretty solid premise.

Weirdly, the protagonist of the game isn't Tony Stark or Captain America as you would think in this sort of game. If I were writing it, Captain America would have been sent into the future five years via science magic or in a coma like Metal Gear's Big Boss. Instead, the protagonist of the game is Pakistani American Kamala Khan a.k.a Ms. Marvel. She is the super-Avengers fangirl that witnessed A-Day first hand and is trying to find evidence that will exonerate her heroes.

If you're not familiar with Kamala Khan, she's basically a teenage Spider-Man in personality with Mr. Fantastic's power set. She's an ordinary teenage girl living in New Jersey that is an enormous dork but full of enthusiasm for heroics. I happen to love the character but even I got irritated with the opening 30-minute fetch quest consisting of her wandering around a Disneyland food court promoting Avengers merchandise. I'm not kidding, that is the beginning of the game. I also fully believe at least half of the players will think the game invented her. I also think that Sony is probably the reason why it's not a teenage Peter Parker reuniting the Avengers.

My overall impression of the campaign is, generally, I wish this was a single player Ms. Marvel game because I think it would have been an awesome introduction to the mainstream video game world for her character. The story's lower stakes, focus on Inhumans, and use of AIM would feel more appropriate for her than the entire Avengers. As such, it feels like AIM are starter villains for Earth's Mightiest Heroes.

The combat is, again, fine. If it feels like I'm damning the game with faint praise, that's because I am. There's multiple ways to play the game with each separate character but it doesn't do any of the combat styles particularly well. Serviceable is probably the way I'd describe it. Honestly, the only characters I really enjoyed playing were Ms. Marvel and Captain America. Ms. Marvel because her stretchy powers were something I hadn't played before and Captain America because it's basically Batman from Arkham Asylum.

There's no sense of accomplishment upping your equipment because you know, intellectually, that none of the Avengers use that much equipment in the first place. Thor isn't going to start slapping on pieces of AIM armor or wrist-gauntlets nor is the Hulk. The cosmetics are also not that attractive in the first place as I don't care if my Hulk is a slightly darker shade of grain. Maybe if they sold Hulk cosmetics like a Red, White, and Blue one or wearing clown makeup but, alas, no. Injustice 2 was at least smart that the cosmetics changed your characters. Substitute US Agent, Bucky, Falcon Cap, or Captain Hydra skins for Captain America.

In conclusion, this game is not very good. It's not terrible and I am playing it but I'm almost doing that out of obligation due to my love of Ms. Marvel as well as AIM. As an Avengers fan, I wouldn't feel obligated to play this anymore than the movie tie-ins. It's the fact it used two relatively lesser known baddies front and center that makes me think, "well the story is good at least." Even then it really is discount X-men with robots hunting for superpowered humans and stuffing them in camps.

* And the 5 is being generous.