Superhero novels are one of the areas of genre fiction that don't get much attention. A few great authors like George R.R. Martin and Brandon Sanderson have dipped their toes in the genre but prose fiction is something that is traditionally considered a somewhat off-beat medium for stories about them. The vast-vast majority of superhero fiction is in comic book form and following up are movies, cartoons, video games, and even live action storytelling.

This is because superheroes are a primarily visual medium and you get a large amount of storytelling from watching the heroes at work. I have a certain fondness for superhero prose, though, because it's a genre that hasn't been utterly glutted by imitators. My first book, The Rules of Supervillainy, was released in it as a sort of pure fun collection of pop culture and oddball antics. It also remains my most successful book series by far.

Superhero prose fiction tends to deal with either deconstructing the genre conventions of the superhero world or parodying them. They can be very serious or very-very silly.  Neither of these styles is any better than the other and the best part of the superhero genre is that you can do both without going too far from your inspirations. Superheroes are, after all, stories that can be horrifically tragic one day to relentlessly goofy the next.

I should aslo note that superheroes are a major inspiration for other successful genres that are much larger in prose fiction. Where would Urban Fantasy be without its leather jacket wearing Buffy-eque heroes? What about Harry Dresden? Is he not just Spiderman with a magic staff? Well these are beyond the scope of my discussion and here's 20 of my favorite superhero novels. I've tried to mix better known works with indie favorites. 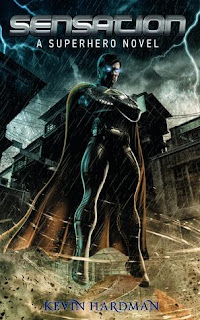 I very much enjoyed Kid Sensation as a novel series because it's very different from the majority of books on my list. In simple terms, it takes its plot very straight. It's about a kid who discovers he hit the jackpot in terms of superpowers but decides to play things cool before his tryout to be a superhero with the big-leaguers. That, unfortunately, goes horribly wrong. 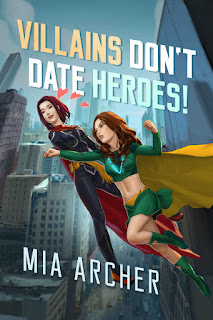 This is a novel that was on and off this list multiple times. Basically, I couldn't decide if I didn't like it or really-really liked it. Finally, I decided on the latter but it's an acquired taste. It's a lesbian superhero romance about the local Lex Luthor equivalent Night Terror falling for the Super Girl-esque new hero in town. It has a very Megamind-esque feel and I haven't checked out any of the sequels but I had a lot of fun with this.

18. The Case of the Claw by Keith R.A. DeCandido 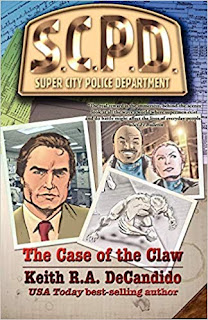 A bit of an oddball case, The Case of the Claw has multiple sequels but they're not listed as part of the same series. For them, you'll have to look under (the SCPD series). The premise is basically Gotham Central but in a nicer community. It follows regular cops working cases that often bump up against superheroes and supervillains. I love anything KRAC does and am a huge fan of his work in the Star Trek universe so this was always a guaranteed sale. 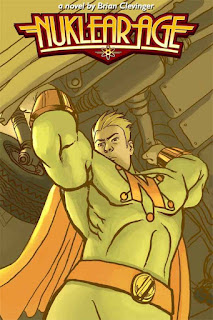 I used to read 8-bit Theater, a webcomic about Final Fantasy I, in the far off time of 2004 (which is 14 years ago--Jesus Christ). Brian wrote a 777 page novel called Nuklear Age that is about a radioactive Superman-esque figure's sidekick. It follows a story that moves from the Silver Age to the Iron Age to the Modern Age of comics. It gets dark in many places and ends on a surprisingly heartrending but powerful note. The writing is a bit rough and the author admits it in the 2012 preface but I forgive it for that. The fact it's stuck with me for 14 years should also say how good it is.

16. Velveteen vs. The Junior Super Patriots by Seanan Maguire 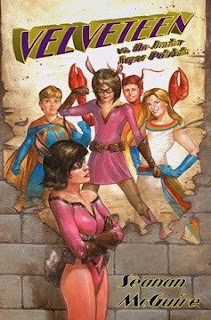 This is a book I debated putting on here because it's not easily available in ebook format. You can read it online for free or listen to the audiobook but some issues mean you can't just pick it up. However, the books are damned hilarious so I think you should read them anyway (or listen). The premise of Velveteen is a woman named Velma Martinez who possesses the power to animate toys. Velma's archenemy? The corporation that owns the copyright on all superheroes and treats them worse than Disney does its stars. 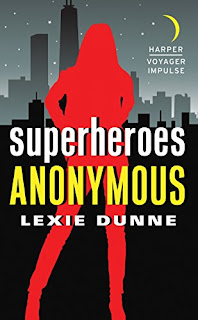 Imagine Lois Lane getting superpowers and keeping them. Essentially, this is the premise of Superheroes Anonymous when after a career of being kidnapped and menaced by people trying to fight the superhero Blaze, he moves to Florida before his last remaining villain experiments on her. Gail Godwin is a great leading protagonist and while most of the first book is a training montage, it works out surprisingly well just for the smoothness of the dialogue. 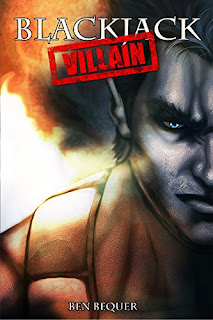 Blackjack is a gazetteer, archer, and super-strong. They're abilities that benefit one another as he robs from the rich and gives to himself. Unfortunately, he kills a superhero and is permanently branded as a monster not long after he decides to go straight. The books are a bit iffy on the editing at times but I enjoyed all three of them a great deal. 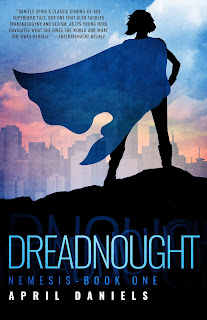 Dreadnought is the story of a transgender girl named Danny Tozer. One day, she finds herself inheriting the power of Earth's greatest hero, giving her a body as well as powers similar to Supergirl. I very much enjoyed this heartbreaking tale of coming to your own and learning to rely on yourself because no one else can be trusted. 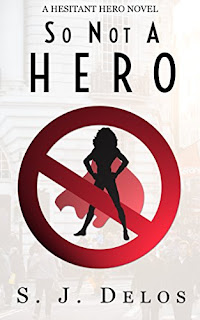 Another supervillain story, though this one is about one who reformed. Crushette is a woman with the powers of She-Hulk who was briefly involved with the world's worst supervillain. Now she's devoted herself, quite by accident, to the cause of good in the name of her newborn daughter. I'm really looking forward to the third novel when it comes out. 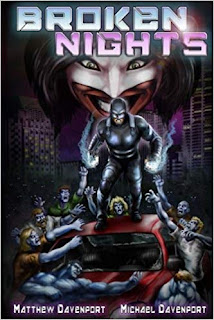 Broken Nights is a fun little story based around the premise of, "What if Batman were middle class and got his gear from Amazon.com?" It's an entertaining little story and while fairly straight to traditional superheroics, was one I definitely enjoyed. I also liked the sequel and hope they make a third book to cap off the series. 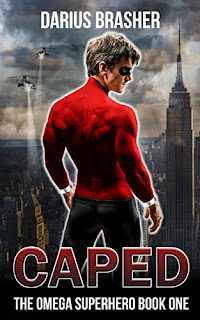 Darius Brasher is a great writer of superhero fiction and has made two great series before starting on a third one, all set in the same world. Caped is the story of a classic superhero "coming of age" story that follows a kid as he tries to figure out whether he wants to be a hero and then how it makes him a darker person than he wants to be. I really enjoyed the entire series. I also recommend his Superhero Detective series. 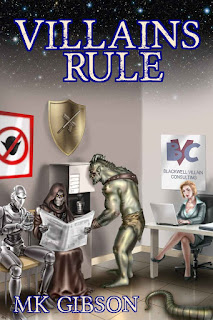 There's a lot of books about supervillains in this work and that's because getting into their minds is sometimes (only sometimes) more interesting than getting into the heroes'. Villains Rule is about a demigod wizard who serves as a villainous consultant to fantasy and comic book superhero baddies. It's a ridiculous and fun premise that I enjoyed tremendously.

8. Confessions of a D-List Supervillain by Jim Bernheimer 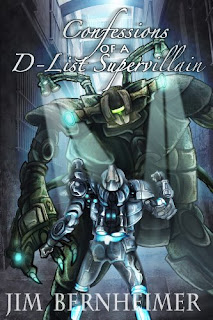 I actually belonged to the same writing group as Jim Bernheimer at Permuted Press' old website. The two of us wrote our supervillain novels simultaneously and he helped give me a leg up to release The Rules of Supervillainy. Confessions of a D-List Supervillainy is the story of Cal Stringel a.k.a Mechani-Cal. He's basically the kind of guy Spiderman beats up in the opening of a comic before going to fight his real enemies. Cal ends up unwittingly saving the world in the first book but has a flashback in the second (and superior) Origins of a D-List Supervillain. So far, I've enjoyed all four of the novels, though. 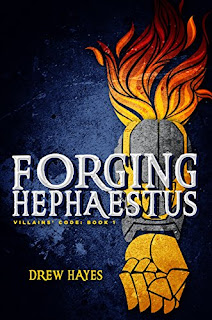 There's a truce between the superheroes and the supervillains of the world. A set of rules ala The Ventrue Brothers to keep things from exploding into pure chaos as well as eliminating each other's families. This doesn't sit well with extremists on both sides and results in one of the oldest and most terrible of supervillains coming out of retirement. I, sadly, haven't checked out his other superhero series Super Powereds. 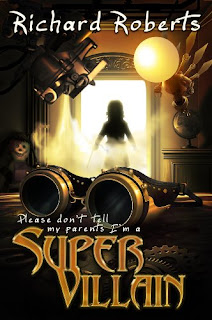 Please Don't Tell My Parents is a nice antidote to a lot of the grimdark which has been afflicting plenty of superhero stories. It's the story of an adorable set of junior high school students who have superpowers and their decision to become supervillains after their attempt to be superheroes goes disastrously wrong. It helps that Penny Akk looks almost identical to Tegan Croft's Raven on their audiobook covers. Sadly, there's currently a kerfluffle and it's not available in Kindle form. Hopefully, that will change soon. 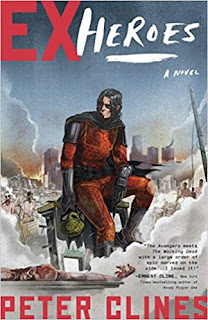 Superheroes versus zombies is an inherently wonderful concept. It's like pirates versus ninjas. In this case, the superheroes of the world are a lower-level than normal so they're unable to stop the zombie apocalypse. They are, however, able to save a small group of people in Los Angeles. The series was abruptly cancelled but got a number of really good books out. Notably, I was really impressed with how the author addressed a lot of criticisms of the original book in-universe. 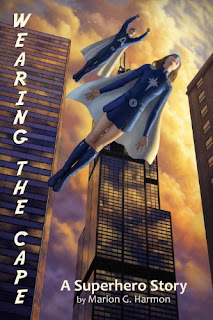 Before Supergirl had her own series, she was a fairly obscure character mostly loved by hardcore comic book fans. Wearing the Cape is a tribute to Kara Zor-El by creating the character of Hope Corrigan, who is one of the best stand-ins you could make. In a world where thousands of people gained superpowers spontaneously, she gained the typical flying brick ones. I admit, I like the first book better than the sequels but it remains one of my all-time favorites of superhero fiction. There's now an RPG setting based on the works. 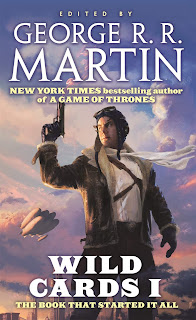 Before A Game of Thrones, there was Fever Dream, and before Fever Dream there was Wild Cards. Wild Cards is an experiment in fiction writing where George invited a bunch of his friends to write in a world ravaged by a super-power granting plague. For the most part, the superpowers are just horrifying deformities that are used to comment on the then-current AIDS crisis and social justice. It's also got some pretty awesome characters both good, bad, and grimdark. Newcomers may want to try Inside Straight, which updates the setting to the 21st century. 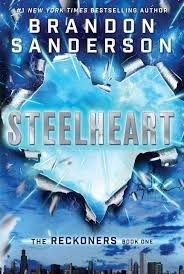 The Reckoners Trilogy would be the no. 1 on this list if it's take on superheroes wasn't a fairly dark one that isn't quite what I was looking for. Superheroes have taken over the world and made it an awful, bad, and post-apocalyptic sort of place. The Reckoners are a unit of humans with special weapons devoted to taking them down.

1. Soon I will be Invincible by Austin Grossman 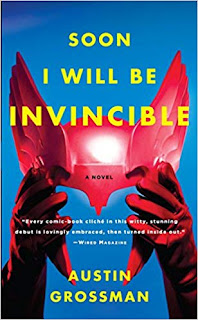 Soon I will Be Invincible is the inspiration for a lot of what would eventually become the prose superhero genre. Doctor Impossible is the world's greatest criminal mastermind but he's also mentally ill (sort of). He has hypercognition disorder, which means he's an evil genius. The book is both loving and condemnatory to the superhero genre and probably the best out of all of this group for someone to read. Better still, the more you know about comics, the more a lot of the in-jokes will make sense.

Also Recommended:Crimson Son by Ross Linton, The Rise of Renegade X by Chelsea M. Campbell, Zephyr by Warren Hately, Sad Wings of Destiny by Thom Brannan, and Prepare to Die by Paul Tobin
Posted by CTPhipps at 4:10 AM