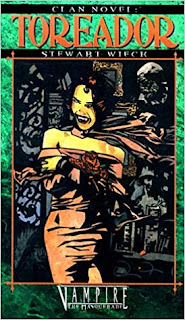 TOREADOR is the first novel of the VAMPIRE: THE MASQUERADE Clan Novel saga that began in 1999 and finished right before the ending of the Old World of Darkness tabletop roleplaying game. If that sounds like gobbledygook to you then you're probably not the intended audience of Goth nerds who ate these books up toward the turn of the millennium. Even so, I remember a lot of people picking up these books who'd never played a game with dice or character sheets in their life. It was a big influence on my STRAIGHT OUTTA FANGTON books as well as works like TRUE BLOOD and UNDERWORLD.

The premise of Vampire: The Masquerade (and the World of Darkness setting in general) is a familiar one to urban fantasy fans. The world we know is built over a hidden reality where vampires, werewolves, mages, and other supernaturals compete for supremacy. The undead wield amazing powers, financial and otherwise, that protect them from hunters as well as other threats. They control the world and feed on humankind with impunity. Unfortunately, they are their own worst enemy with the vampires divided into 13 clans, multiple sects, and a conflict between elders as well as neonates.

This book begins a 13 novel series that illustrates each of the clans as well as tells an overarching story. Among other things this means that while some of these books are going to be self-contained stories, others will just be open-ended. In this case, Toreador only starts the journey of its protagonists and you'll have to read the entire thing to see how it all ends up. I did read the original thirteen novels and while some were only so-so, others were great and I recommend it all to readers.

Clan Novel: Toreador follows two members of the Toreador Clan, a clan of artistes and socialites who are the "pretty" vampires. The first, Leopold, is a Neonate who doesn't remember his past and makes a living as a sculptor who feeds off street kids he seduces into being his models. The second, Victoria Ash, is a sex-obsessed Elder of her clan that is deluded into believing her petty power games are important. Both of them have their immortal ennui-filled lives disrupted by an attack from the Sabbat as well as the discovery of a magical artifact.

The Sabbat, for laymens out there, are the really evil vampires compared to the Camarilla or Anarchs who are just the sorta-evil vampires. They're a bunch of rampaging psychopath monsters who want nothing more than to feed on humanity openly while the others want to hide. The artifact, the Eye of Hazmiel, is only hinted at being a gamechanger in their world but will not reach its full potential until later books. This book's appeal is primarily groundwork and explaining the World of Darkness to newcomers.

The treatment of the Toreador clan was very well-done as we get the different sides of the Clan. The artistes are represented by Leopold, who struggles with the amorality of his work as well as his desire to give back to the world by creating beauty. However, he's unable to create anything original anymore due to the curse afflicting him. He can't even make sculptures of his fellow Kindred as something blocks his talent. Victoria Ash, by contrast, surrounds herself with art and misses how dark and disturbing all of it is. She also can't break free from using sex and desire as her only weapons despite the fact most Kindred can barely remember what sex is like since the lust for blood has replaced it.

The book is a bit slow going in terms of both action as well as deep character angst. For the most part Leopold's story about not remembering his past isn't as evocative as Louis from Interview with a Vampire's "I need to kill people to survive." Likewise, Victoria Ash is very comfortable with her existence as a monster. The action doesn't begin until the end of the book and then it's everything going to hell.

My favorite part of the book remains the opening where Leopold describes his night consisting of luring a young woman back to his home, convincing her to model for him, seducing her (with his powers or not), then feeding only to drive them away with a lure of drugs as well as cash. It's a crass and robotic story that fascinates. We also learn how he makes his money, what he does to secure his haven, and other details that set it apart from other vampire stories.

In conclusion, Clan Novel: Toreador has quite a lot going for it. I like both Leopold and Victoria Ash as characters. However, I do think this is a book that should be read primarily by people at least loosely familiar with the World of Darkness. I also think it's a big commitment because you aren't going to get the full appeal of the series unless you read the whole 13 novel set.

Available here
Posted by CTPhipps at 11:38 AM