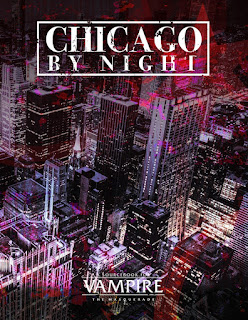 I thought I'd share this in the final hours of the Kickstarter because we've finally got a complete view of what the book's interior. We may not have the formatting or art and there will undoubtedly be some editing done but, overall, we know what Chicago by Night 5E is going to look like and what material it contains.

Chicago, despite being the Waterdeep of the World of Darkness, didn't get updated for 3rd Edition or Revised. It did get a short update for Beckett's Jyhad Diary where we saw the Primogen ruling the city as well as Helena exposed as a Methuselah. It also had a new status quo hinted at in Rusted Veins that made me excited about the possibility of 5th Edition update. The book hit some small controversy when it was revealed that the Lasombra Clan would be included in the book and that if you wanted to play them, you'd have to purchase a city book you might not normally be interested in--which is what's called good business in my view.

It is very good. A real appeal of Chicago by Night 5E is that it manages to serve as a bridge between "classic" Vampire: The Masquerade and 5th Edition. There's the big changes like the fact the Tremere are answering to no one beyond the city level, the Second Inquisition is actively hunting people, and the Beckoning has claimed several Elders. However, for the most part, it's business as usual in the Second City and everything is from a street-vamp's perspective of the new world.

Kevin Jackson is the new prince of the city and perhaps one of the few characters who could match Lodin for being a potential ally as well as antagonist to the players. He's evolved past his gang roots and embraced modern technology as well as finance to be the youngest Prince in the Camarilla. However, the price for that is that he's cracking down massively on the Anarchs and murdering his fellow young Kindred by the dozens. It's Camarilla or bust and he has a very unexpected Sheriff.

The book centralizes its focus on the War of the Ages, which has always been central to Vampire: The Masquerade, and is one of the areas where 5E was criticized. In addition to the Elders who aren't Beckoned (Annabelle, Critias, and others) we have nasty Pro-Establishment Ancilla who have to be twice as conservative for half the respect. We also have a good contrast between the Anarchs with characters like Anita Wainwright, Gengis, Maldavis, Sweetie Pepper, and now Balthazar (?!) who represent the various shades of their cause.

Roughly half of the books' 40 NPCs are updates on classic characters. The other half are new, some having been in Chicago the entire time and the others being recent arrivals. We also get our first new Lasombra NPCs that are a contrast to the typical Sabbat shovelheads or psychotic religious fanatics. A Japanese hotel magnate, a deranged rabbi, and Talley the Hound are well done. We also get more stereotype-breaking Banu Haqim and Ministry characters. Indeed, it's a joke that the drug-dealing voodoo cult-running Marcel is considered a stereotype by the (former) Setites. My favorite new character may be Sun Che, who is a Wiccan good and love the Earth Tremere who may be a homcidal serial killer (or is just possessed).

The biggest benefit to the NPCs is the fact they are not just history and a personality description. Instead, each write-up contains "Plots", "Thralls", "Domains", and other vital information for fleshing them out as well as giving them information. They are also carefully selected to give us new information on things like the Second Inquisition and Beckoning without spoiling them. Helena has found a "cure" for the Beckoning in her view that is horrifying and yet appropriate for Gehenna. We also find out the Second Inquisition has a lot more fingers in the pies of vampire society than we ever expected with "Flyboy."

The city section of the book is effective for communicating how to run Chicago as a location as well as incorporating little bits of local flavor. They got Chicago natives to write this section and it shows, adding a level of authenticity to the entire proceeding. I also appreciate the focus on clubs for player characters to visit with Red No. 05, The Blue Velvet, and a return of the beloved Succubus Club. Do nerds like me wonder, "What happened to the Cave!?" Yes, yes we do but that's just me.

The depiction of the Lasombra was one of the things which readers were really looking forward to and the writers had an insurmountable task: why would the most fanatical leaders of the Sabbat leave the sect they rule? It's like the Ventrue defecting. Well, the answer surprisingly worked for me and incorporated the lore well enough that it not only seemed plausible but inevitable. Sabbat players can be content, though, that about half of them are leaving. I'm fond of the Lasombra's new discipline of Oblivion, which is mostly classic Obternation with the option of Necromantic rituals now. I think the Lasombra's weaknesses need to be tweaked, though, as some of it doesn't make much sense to me. I think at my table it'll just be, "you don't show up in mirrors and you show up as static on recording devices."

Kudos to Klara Horskjær Herbøl for writing the Chronicle "The Sacrifice" at the end, which is about the negotiations by the overeager Kevin Jackson (who just wants to show off for the Camarilla) to bring the Lasombra into the Camarilla. It incorporates just the right amount of Gothic Punk, canon characters, and twists to make it interesting. Plus, the player characters are a deciding factor in the future of the Camarilla. There's also a bunch of adventure hooks in the back of the book that are very easy to use if you don't have much prep time.

So, overall? I love this book. It's a blast from the past but also sets a nice tone for the future.