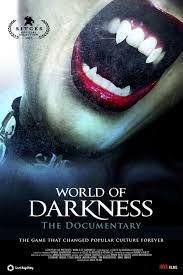 THE WORLD OF DARKNESS DOCUMENTARY is ridiculously hard to find. I'm saying this before I tell you my review of the work. This should be available on Netflix, Hulu, and on DVD for purchase as well as digital download from a website. Instead, I had to download Fangdago on Xbox One in order to purchase and watch it. [Edit: I've since found it on Amazon Prime as well]. It's a wonderful piece of art which talks about one of my favorite pieces of media: White Wolf Entertainment's World of Darkness.

For those of you unfamiliar with the property, it was created in 1991 by Mark Rein Hagen at the behest of Steve and Stewart Wieck. Mark, as illustrated in the movie, was driving through Gary, Indiana one day when he was trying to figure out a their next big property. Inspired by the scenes of urban decay, Anne Rice, The Lost Boys, and other pop culture--Mark created Vampire: The Masquerade. Before urban fantasy existed under that name, it was Gothic Punk and it was a game about playing the undead in the shadows of modern human civilization.

The documentary consists of a set of interviews where the founders and developers talk about how it got started as the stapled paper White Wolf Magazine then moved on to become a pop culture phenomenon. We get insight from Justin Achilli, the aforementioned founders, the head of the Camarilla/Mind's Eye Theater, and a number of beautiful cosplayers who provide visual distinction for what might otherwise be a bunch of middle-aged gamers like myself.

My particular history with the World of Darkness mirrored a lot of the people here. I was an awkward geek living in a fundamentalist American South before discovering the counter-culture influenced Vampire: The Masquerade. I was entranced by the cover of a red rose on a granite slate (which turned out to have been done as a last minute patch on a horrible cartoon 80s action movie cover). White Wolf had, appropriately, been founded in the Punk section of Atlanta, Georgia where my future wife spent her teenage years.

If you're looking for a hard-hitting documentary about the rise and fall of a gaming company, then this is not the documentary for you. It's mostly a love-letter to White Wolf Entertainment even though it contains more lumps than I expected. The interviewers aren't afraid to take shots at some subjects where they feel like the company made serious errors like the universally derided lawsuit against the Camarilla fan club.

The documentary also doesn't hesitate to pay backhanded praise, at best, to the still-popular New World of Darkness with some developers actively blaming it for killing the "World of Darkness" zeitgeist. One notable moment is when they show a video of everyone cheering in the audience when they announce CCP would NOT be using the New World of Darkness for their upcoming MMO. The documentary condemns Kindred: The Embraced as a hack job and skips over Vampire: The Masquerade: Redemption to talk exclusively about the many trials of Vampire: The Masquerade: Bloodlines.

I also must state it's a bit of a shame the documentary ends on the failure of the World of Darkness MMO, which was absolutely beautiful from what little slices of gameplay we get to see. There's hints that it might have been a project that got too ambitious (talking about the hundreds of different styles of clothes your character could choose from). Sadly, it ends on that downer note without the Vampire: The Masquerade 20th Anniversary Edition or take up of the line by Onyx Path Publishing to show a triumphant return. 5th Edition certainly doesn't get a mention either.

It's great to finally put faces to so many beloved writers and artists who helped create the work that helped define my 90s experience. The World of Darkness was hugely influential to the Blade and Underworld movies as well as True Blood series. We also get a real sense of how it individually impacted lives as gamers talk about how the World of Darkness changed their lives. It's good also to see a diversity of players that shatters the stereotype of white male gamers being the only people who tabletop.

Really, the sense of the documentary is largely uplifting. It's a story about a beautiful topic that I think all Gothic Punk RPGers and World of Darkness fans should appreciate.