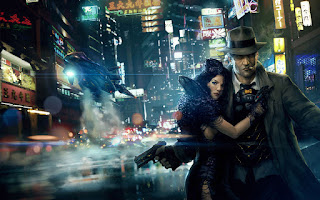 To go along with everyone else's "Wait, did the world become cyberpunk and I didn't notice?" I should point out the following facts:

1. From Robocop. "OCP traditionally dabbled in not for profit industries like healthcare, prisons, and space travel."

2. Hacktivist anarchist groups out to bring down government and corporate conspiracies actually exist.

3. Underground journalists and leakers are actually the biggest threat to First World security in the opinion of the Powers That Be.

4. The FBI hired hackers to open a terrorist's phone.

5. The entirety of Enron was black comedy Frank Miller couldn't have written. For example: They fixed the California elections to put a action movie star in as governor while simultaneously shutting down half the state's power plants to create an artificial energy shortage. This while they were bankrupt from hiding all of their losses for a decade. That's some Shadowrun stuff right there.

6. The governments bailed out all the megacorps for gross financial stupidity in 2008. They refused to do the same for victims of a plague in 2020.

7. The world's largest mercenary company, G4, does a large number of the West's prison system as well as corporate security.

8. Bionic limbs created by 3D printers are real. The latter because people can't afford the metal ones.

9. News networks (take your pick) exist as for profit entities catering to the whim of their audience's bias.

10. A reality TV show star and billionaire is the former President after a guy who favored unlimited surveillance and use of assassination robots.

11. The fact unlimited surveillance exists and was used to help American corporations in deals.

13. The fact you can buy non-lethal versions of many assassination robots online.

14. A cellphone sized computer can be a weapon.

15. Phones and computers can be plugged into your head, albeit through your ears.

16. Detroit, as in Robocop 2, alas did actually declare bankruptcy. They also built a statue of Robocop because, unironically, they really wished they had one.

17. The world's eighth largest pyramid is a Bass Pro Shop in Tennessee.

18. The working class pay 95% of all taxes versus 5% by corporations when it was reversed in the Forties.

19. It's possible to buy a carbon fiber katana over the internet. Ditto mirror shades and a bullet proof trench coat--all shipped to you overnight.

20. The police now have Special Forces units in every city and many places have them driving APCs as well as tanks.

21. Social media resulted in spontaneous revolutions in several Arab countries. The crackdowns were pretty damn awful to say the least.

22. Virtual Reality is a thing with actual games being shipped for it.

23. Mass data mining occurs just to find out what you would buy from a online store and why.

24. Amazon has sold dumb AI for your house and Microsoft has done the same for your computer.

25. China is now the predominate economic power in the world due to how much leverage it has over the United States.

26. The Soviet Union may have fallen but we're back to Russians making sinister plans to take over the world, only now with computer hackers.

27. Electric self-driving cars exist but no one uses them versus oil guzzling military-looking ones.

28. The world's largest environmental disaster was paid for in fines which left the oil company fine.

29. It's impossible to tax most trans-national corporations due to their multinational nature.

30. Criminal syndicates with ties to terrorism have forced governments to treat with them.

31. Global warming has reached the point of "so obvious it's flooding cities" while corporations still foster people denying it.

32. Countries have places where there's not enough to eat or a central government but citizens possess Ipods.

33. A wetworks black ops against Iran's nuclear program was conducted entirely by hackers.

36. The fact mercenary-for-hire criminal hackers is an actual profession. They even have names based on what kind of hat they wear.

37. The fact artificial worlds people live much of their lives in are common pastimes online now.

38. The fact some postage is now being delivered by flying robots.

39. The fact individuals are still trying to make artificial islands to be lawless tax-free corporate states. Double points that these invariably become scams to bilk investors.

40. A literal "Dark Web" exists for the purposes of buying everything from drugs to weapons to hitmen. The most famous of these was run by a man codenamed "The Dread Pirate Roberts."

41. Nestle extracted 35 million gallons of water from a California national forest during a drought to sell back to the people of California.

42. Almost all competing major brands from food to books are owned by a small number of 5-6 conglomerates. Many of these competing brands are owned by the same parent company.

43. A group of sixty hackers, librarians, and scientists gathered together all of the climate change data they could because they were afraid the President would delete it.

46. The former President got in a Twitter feud with a teenage girl.

47. The assassination of a head of state's brother, North Korea in this case, was conducted under the auspices of a fake reality game show.

49. Late night comedians are considered to be valid sources of news and journalism.

50. Quantum physicists believe reality may be a holographic computer simulation and that reality's building blocks are made of information bits. This is notable for the fact the world's 2nd best, at worst, physicist believed it to be true.
51. Senators invested heavily on the information they gained about an upcoming pandemic, using it as an opportunity for insider trading.
52. Private corporation-run Mars colonies are not ENTIRELY as ridiculous as they used to be.
53. The Chinese government went to elaborate lengths to shut down a Tawainese horror game (Devotion) because it criticized their leader by comparing him to Winnie the Pooh.
54. Cyberpunk media like Mr. Robot and Watch_Dogs mostly takes place in the present day. Hell, Hackers did as well.
55. Stock manipulation of pandemic treatments was done by announcing fake cures on the internet.
56. A massive riot and attempt to overthrow the government was organized around a social media ap.
57. A major social media ap's icon is based on both OCP and the Nazi flag (which OCP's flag was based on). Yes, I mean Parler.
58. A massive conspiracy theory/ideology with millions of believers was started on 4chan as a fanfiction game.
59. Said fanfiction game's believers included two Congressmen.
60. A massive NSA surveillance plot was revealed by a whistle blower that later defected to Russia. Almost no one cared about this revelation.
61. Televised comedians are now the primary source of news for many Americans.
62. The ones that don't get their news from comedians get it from the internet.
63. The largest economic entity in Poland is a video game company.
64. Said video game company lost a billion dollars and rocked their nation's economy because of a bad rollout.
65. The former Secretary of Education, Betsy Devos, had her fortune come from multilevel marketing. Her brother, Eric Prince, has a literal private army.
66. Amazon is actually delivering packages with their army of flying robots.
67. Global warming is very probably the thing that will cause human extinction.
68. The blood diamond trade is gradually being replaced by the quest for lithium in human rights abuses, all so people can have cellphones.
69. The number of people with cellphones in Sub-Saharan Africa, the poorest region on Earth, are 3 out of 4.
70. There's a massive eco-friendly supercity in the Middle East that failed (Masdar City) and is now a ghost town.
71. The Prince of Saudi Arabia is building another one without roads.
72. The former President of the United States suggested we nuke hurricanes.
73. The entire life (and death) of Jeffrey Epstein reads like someone writing a particularly disgusting cyberpunk villain.
74. Microsoft created an AI that, within a couple of days, was violently racist and trollish due to exposure to social media.
75. Google and Facebook are companies that charge nothing because they are collecting and selling your data to make billions.
76. Nuclear power is a viable ecological alternative to fossil fuels because the latter have become more dangerous.
77. Henry Cain's Twitter account was continued to be used after his death by his supporters, forgetting people would notice.
78. The largest mass demonstrations in history against police brutality were the result of cellphone video.
79. Anonymous attempted to fight the Zeta Cartel and the latter threatened mass executions to stop them.
80. One of the Far Right's boogeymen is a nonexistent anti-fascist organization with no members, leadership, or boundaries.
81. A data warfare service, Cambridge Analytica, was instrumental in influencing public opinion to get Britain to exit the EU.
82. Scalpers tried to buy every Playstation 5 and Xbox X S in the world to sell via automated purchases. It almost worked.
83. Politicians now have charity fundraisers playing video games on Twitch.
84. The fact internet celebrity is actually a vastly lucrative career for many.
85. Ditto professional video game streamer.
86. The fact Twitter claimed it couldn't ban hate speech because it would affect too many politicians.
87. 3D printed guns are actually becoming a problem. They aren't very good but they don't have to be.
88. The video game, Cyberpunk 2077, was made with the same corporate crunch and soulles abuse of power that it parodied. Its employees actually even called out management on it.
89. You can buy illegal drugs in online black markets and pay with cryptocurrency.
90. Said cryptocurrency actually is accelerating global warming and a massive drain on the world's power reserves.
91. There are people who are denied access to health insurance and have no choice but to buy their legal prescription drugs illegally on the Dark Web. These drugs are cheaper to buy illegally online and some people will die if they don't get them.
92. The richest man on Earth, Jeff Bezos, had a blackmail attempt made against him with his cellphone shared dick pics.

93. Blue and purple hair is common and that's not even remotely edgy. In fact it's standard fare at the salon.
94. Bio-hacking has become common enough that it has its own subculture.
95. There is now a branch of the military devoted to outer space warfare, however ridiculous the concept.
96. They used the Star Trek logo for #95. Yes, it existed beforehand but it's still best known for Star Trek.
97. The world premiere of many movies have since started happening on streaming services.
98. A billion dollar corporation, Theranos, existed purely based on a technological device that never worked or could.
99. A major treatment for Alheizmers is microchips in the brain.
100. Jeff Bezos actually piloted a giant mechanical robot while adjusting his look to be identical to Lex Luthor's.
101. Cyberpunk lists are flooded with things like this article, asking, "Is this cyberpunk?"