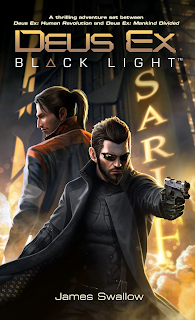 One of my biggest complaints about Deus Ex: Mankind Divided was the fact it was a story which took place in the middle of itself. There was a very weak beginning where lots of confusing as well as contradictory information was thrown at you as well as a weak ending where we didn't know what was going on.

Despite this, I enjoyed quite a lot of the world-building and was curious about the novel set between Deus Ex: Human Revolution and Deus Ex: Mankind Divided. I, honestly, wasn't expecting much despite liking Deus Ex: Icarus Effect by the same author. After all, game fiction tends to be disposable. Well, this isn't.

Black Light is a book which absolutely should be read before a person plays Mankind Divided. It not only follows directly from the original game but fills in a lot of events which are only alluded to in the main game. These include Adam Jensen being fished from the ocean, his recovery time in an Illuminati-run hospital, how he found out about Sarif Industries going under, and then deciding to work for both the Juggernaut Collective as well as Task Force-29. This is in addition to the book's main plot of preventing an arms deal secretly backed by the Illuminati.

I'm kind of irritated that so much of this was left out of Mankind Divided but I'm going to try to review the book based on its own merits. As such, James Swallow does an excellent job of getting down Adam Jensen's "voice" as well as his vitriolic relationship with Francis Pritchard. We can feel Adam's dismay as he finds himself in a world where not only are Augments (cyborgs) despised but the truth of the incident which drove them violently insane for a day has been covered up.

The depiction of the world is moving with the sight of Detroit transformed from the crime-ridden but hopeful community in Human Revolution to a hellish wasteland even worse than our present reality. There's also a lot of emotion to be had from the fact Adam wanders around Sarif Industries, finding everything boarded up and forgotten. The Second Renaissance promised by augmentation technology is destroyed and it's all because we weren't able to stop Hugh Darrow and the Illuminati in the first game.

This isn't a book for individuals who didn't play Deus Ex: Human Revolution as it makes a staggering number of references to the game. It also has a surprising cameo from a character who played a big role in both the original Deus Ex and Icarus Effect. I appreciated this cameo and seeing Adam Jensen face off against him, even though I know they're never actually going to have a definitive fight.

Overall, I really enjoyed this novel and think it's a pretty good addition to the Deus Ex canon. The problem is that this is all stuff which really should have been in Mankind Divided and it's frustrating to find important exposition regulated to side content. Deus Ex fans will enjoy this but I don't think other science fiction fans need to read it.