The Blade Itself review 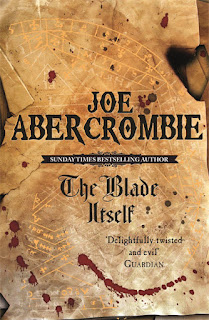 The Blade Itself is the first volume of the First Law Trilogy, a collection of low fantasy novels which helped bring the concept of grimdark to mainstream attention. While very few authors willingly admit to writing grimdark, this trilogy is generally one you can point to and say, "This is what the genre is supposed to be about." For those who want to avoid the question of what grimdark means in regards to this novel, I'll instead say The Blade Itself is an excellent, easy-to-follow novel with vividly-realized characters engaged in a variety of interesting storylines. The actual plot, a budding war between three nations, is less engaging than simply watching the novel's protagonists stumble into each other's narratives.


If I were to summarize the appeal of Joe Abercrombie's style, it would be that he creates extremely memorable personalities. There's Sand dan Glokta, a once-handsome and dashing swordsman who has been mutilated to the point of being a caricature of his former self. Now an Inquisitor, he uses his intimate first-hand knowledge of torture to break the Empire's enemies. There's Logen Nine-Fingers, a barbarian on the run from his former king who is a great deal less boisterous than the majority of his archetype. Jezal dan Luthar, a arrogant spoiled nobleman who struggles with his attraction to Ardee West, a charmingly foul-mouthed woman much-below his station. I could go on but almost every character in the book vividly leaps off the page and has a fascinating story to tell.

Indeed, as mentioned, the best part of this book isn't the main plot: the upcoming invasion of the Union by the North's new monarch as well as a revanchist-based invasion from the South. Nor the secret plot of cannibalistic wizards to do something nefarious. No, the best part of the book is just getting into the heads of these oddballs and experiencing their world through their perspectives. We experience life in the Union through the viewpoints of multiple characters from vastly different socio-economic positions and nationalities.

For example, possibly my favorite subplot in the story is Inquisitor Glokta investigating the Guild of Mercers for tax evasion despite the fact they're probably doing more to prop up the economy than anyone else, so destroying them benefits no one but a section of the political elite. Dealing with Glokta's attempts to be an "honest" Inquisitor at the corrupt highest levels of government really resonated with me. My next favorite plotline? The budding romance of Jezal and Ardee despite the fact neither of them is a particularly "special" character. They're just two mostly-ordinary people with some normal relationship difficulties living in a fantastic world.

My favorite character? I think that's probably Logen Ninefingers. The book pokes a little fun at the kind of epic archetype Conan the Barbarian has become when it sticks him in a theatrical costume meant to invoke the sort of cultural icon he's become. Logen is more like the original Conan in that he's an exceptionally intelligent, somewhat somber man who just so happens to come from a culture without much in the way of amenities.

The book does a good job of making it clear Logen isn't a particularly heroic fellow, quite the opposite really, but you get the impression he's sick of killing too. I have my suspicions we're also going to find out his relationship with the newly-crowned King Bethod are a lot more complex than the rather one-sided portrayal everyone but Logen seems to treat them as.

Indeed, no one is particularly noble and, indeed, everyone is kind of a bastard given the right sort of pressures. No one is especially villainous, either, with the mysterious Eaters being the closest thing which comes to it. This is a world where the invading hordes are coming because they were invaded, themselves, a few generations back and they have long memories. Inquisitor Glokta does monstrous things because that's how interrogations are done in the Union and it's about the only trade left to a man who has been ruined in every other respect. We understand how each character reached their present point of view and the narrative dares us to sympathize with everyone from foppish dandies to psychotic ex-slaves on pointless missions of vengeance.

The world-building is so-so but effective with the best of it being done in each character's perceptions of the world and its reality. Much of it is drawn from the Holy Roman Empire, Viking, and Ottoman cultures but it is how said cultures affect the characters which is what's important. When we're dealing with the fact the Union is unready for war, it is not stated to us but shown by characters meeting the hopelessly incompetent soldiery and dealing with obstructive bureaucrats as well as moronic officers. Joe Abercrombie is a master of "show, don't tell" and that's a quality which is distressingly rare in fantasy.

I enjoyed the depiction of magic in the book as well. Much like in Westeros, magic is a mostly-dead art, forgotten and disbelieved in. A major character in the novel, Bayaz, is one of the last great wizards in the world but he doesn't have enough magical power left to do anything more than seeming parlor tricks. Admittedly, he's almost a thousand-years-old so he still has a few wonders left at his disposal but you don't know how much is chicanery versus talent. The quest for an artifact to reverse this slow walk to extinction for magics one of the actual "major" plots of the book. Sadly, it's the least engaging but that just means it's slightly less interesting than everything else going on around the main characters.

For me, what makes Abercrombie's books so good is they're very grounded. There's no 'thees' or 'thous' with the fantastical elements rather subdued. They're there, certainly, but the characters talk in a manner easily understood with a minimum of anachronisms. They care about money, position, the respect of their peers, sex, and the aches in their bodies. It's not so much grimdark but authenticity which sells the narrative and that's worth its weight in gold.

I heartily recommend The Blade Itself to fantasy fans who want fantasy fiction which feels like it takes place in a vivid world with people you might be able to meet on the street. Admittedly, said street is a very dark and dangerous-looking one full of bars and strip clubs, but those are the kind of places adventures happen.