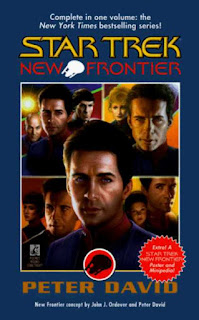 Star Trek fiction existed before this massive multi-book series, existed in books by the hundreds in-fact, but it was continuity-less and insubstantial as a cloud to the greater universe. I hesitate to use the word licensed fan fiction, because some of it was really good, but that's how Paramount viewed it. Flattering, fun to read, but lacking in consistency and unimportant in the grand scheme of things.

New Frontier changed that by providing a self-contained universe written entirely by Peter David, carrying the consequences from one story to the next. For over fifteen years, the adventures of Captain Calhoun have entertained fans of Star Trek and created a bedrock to let publishers know fans were willing to follow original characters into the void.

With the obliteration of planet Vulcan by Nero, the old universe now exists entirely within text (and in Star Trek Online) so the importance of Star Trek fiction can't be understated. So, what better way to celebrate my love of Star Trek fiction than to discuss the Star Trek: New Frontier universe with its first four volumes collected neatly into this omnibus.

So what do I have to say about this series, now that I've talked it up for about four paragraphs?

It is very-very silly.

No, seriously, that's what you should understand before you pick up this volume and read a word of it. Peter David is a comic book writer, one of my favorite if not my favorite, and I mean that in both tenses of the word. The adventures of Captain Calhoun and his wacky crew trump the Original Series in terms of ridiculousness, are often prone to comedy skits, and include a race of Ewok-shaped evil wizards. If the idea of a planet-sized egg for a being not-too-dissimilar to the Phoenix from the X-men comics offends you, this may not be the series for you.

The strange thing is, New Frontier is still capable of generating drama and pathos despite its occasional verges into utter insanity. I care about the characters of the U.S.S. Excalibur more than I care about a lot of fictional characters. The death of billions during the Star Trek Destiny series affected me less than than the loss of some crew members here. This is definitely a book series where your mileage may vary but I recommend checking them out just in case.

Now that I've discussed the series as a whole to death, I'll mention the omnibus itself. The premise for New Frontier is brilliance in itself and I've replicated it a dozen times for my tabletop Star Trek games. A big Romulan Empire-sized territory called the Thallonian Empire has collapsed, leaving dozens of star systems anarchic and without leadership.

The Federation, fearing a humanitarian crisis on an epic scale, sends a lone starship into the chaos to patch things up. It is captained by the second most renegade/rules-ignoring Captain in Starfleet history (the most being Chris Pine's Captain Kirk).

Captain Mackenzie Calhoun is a former planetary warlord who joined Starfleet after liberating his planet from oppressive alien rule. He's also spent the past six years on undercover assignments for Admiral Nechayev, doing the sorts of things Section 31 would do if it had been invented yet out-of-universe.

His crew is a similar collection of misfits including straight woman Shelby from "The Best of Both Worlds", Robin Lefler (Wesley's girlfriend played by Ashley Judd), a hermaphrodite alien engineer, one-off TNG character Selar, an exiled alien dictator, and the cast from Peter David's Starfleet Academy books. It's not the sort of cast which immediately excites you but the way they interact is delightful. Assuming, you know, you throw out all sense that Starfleet has any discipline whatsoever.

The first four books aren't perfect. I'm not too fond of the way that Shelby conducts herself around Calhoun, I think Burgoyne (the hermaphrodite engineer) treats Selar in a manner dangerously close to sexual harassment, and the best moments for our captain are usually when his brother is humiliating him. Despite this, the humor and sense of adventure is nearly beyond compare in the EU. Check them out, I suspect you'll find them well worth it.