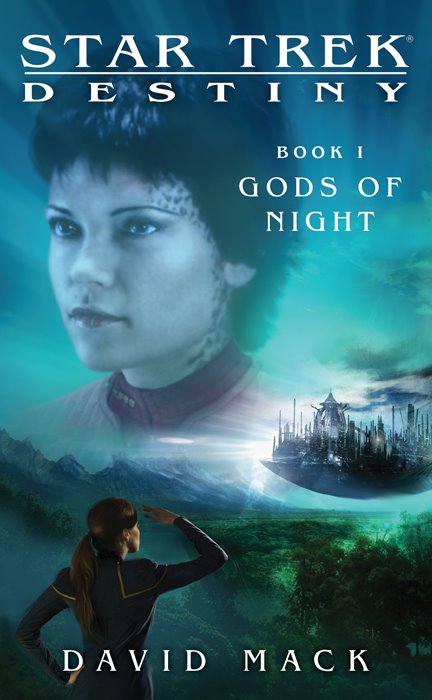 I've just picked up the Star Trek: Destiny series after putting it off for some time. I've been spoiled to a number of facts regarding the book series and how it ends, which ironically kept me from reading it. I'm a big fan of the Borg and always felt they deserved better than to become stock villains de-fanged by repeated losses. An epic trilogy about the Federation having a full all-out war with them was something I was leery about. There was no way the Borg could be portrayed fairly without removing what few teeth they had remaining.

At least, that's what I thought.

In any case, I finally broke down and downloaded the Star Trek: Destiny omnibus for my reading pleasure. Unlike the adventures of Mackenzie Calhoun, I'm going to review the books inside individually as opposed to altogether. There's simply too much story to go around and I think the individual books work better here separately than the first four of New Frontier, that I felt was more an episodic but continuous story.

Star Trek: Destiny: Gods of Night is a book which is deliberately meant to have a relationship to every single era of modern Star Trek. A substantial portion takes place in the Enterprise era while characters from The Next Generation, Deep Space Nine, and Voyager all play a role in the story. Captain James T. Kirk and company are conspicuously absent but they've gotten enough attention I didn't mourn their loss (too much).

The book is divided into four main sections, three in the "modern period" taking place a short number of years after the events of Star Trek: Nemesis and one in the "archaic period" which takes place in the Enterprise-era just before the Romulan War.

The four sections of the book couldn't be more different and I applaud the author's ability to juggle both styles of storytelling. David Mack's ability to tell a despite struggle against an implacable foe, a personal character drama, a 'ghost story' on an abandoned ship, and a more cerebral science fiction 'first encounter' tale shows his versatility as an author.

The first part of the book deals with the Borg Invasion, chiefly through the eyes of Captain Jean Luc Picard and the crew of the U.S.S Enterprise. The author allows us to understand the stakes from the very beginning by watching the extermination of a world and its population. The Borg are no longer here to assimilate, they purely want the Federation's destruction.

This is possibly the only part of the book I'm a little leery of. In Dragon Age, part of what makes the Qunari so scary is 'they waste nothing' and the Borg resorting to destruction rather than murder diminishes them in my mind rather than increases their terrifying power. After all, death is a mercy compared to Assimilation. I suppose it makes the story easier to tell, however, since you'd have to talk about the logistics of assimilating entire worlds. Still, I would have loved to have seen the Borg conquer one world at a time.

Anyway, Jean Luc Picard isn't dealing well with the fact the Borg are annihilating the Federation and they've only a sent fraction of their forces to start the process. They've only sent sixteen or so cubes to attack the Federation when, as Voyager illustrated, the Collective has millions. Watching Jean Luc Picard have a slow meltdown over the inevitability of the Federation's defeat while wracking his brain for the kind of "rabbit out of a hat" tricks which were never his specialty like Kirk is both moving and tragic.

The rest of the TNG crew is over on-board the U.S.S. Titan with William Riker and Deanna Troi suffering a relatively mundane problem of infertility. Deanna Troi was, shockingly enough, affected by her magical pregnancy during the show and now can't safely carry a child to term. This is a struggle Gene Roddenberry would have disapproved of but makes the characters a bit more human. I will say it was hard to get quite as worked up about their personal struggle when the Alpha Quadrant is burning, however.

The final "modern" story deals with Captain Ezri Dax. I'm sorry to say, when DS9 was on, I didn't watch much of the final seasons and missed most of Ezri. What little I saw didn't impress me and I understand she's gone through a lot of character development in the novels. The confident Captain is a far cry removed from the slightly bumbling Girl Friday from the show. She's also a great deal more likable. Her storyline is the crew of the U.S.S Aventine investigating a "haunted" starship lost centuries earlier. While extremely important to the next plot, it seems a poor use of Federation resources when planets are blowing up left and right.

The final storyline in Star Destiny: Gods of Night is that of Captain Erika Hernandez and the U.S.S Columbia, said 'haunted ship' from modern times. I never got to see the character of Erika Hernandez because I am still in early Season 2 of my Netflixing Enterprise but she seems an intriguing character. Basically, a more level-headed version of Archer who is still new to the mysteries of the universe.

The period of Enterprise is the perfect one for the kind of story David Mack is telling with her, which is basically an Arthur C. Clarke-esque tale of meeting a civilization above and beyond your wildest dreams of what was possible. The ship, damaged by Romulan attack, encounters a mysterious race called the Caeliar who I assume will tie in with the Borg somehow but (during Enterprise's time) dwarfs them technologically.

At the risk of spoilers, I'll say that David Mack does a wonderful job with twists in this plot. When there's conflict with Erika Hernandez and her crew about the new aliens, I was sympathetic to both sides. However, I squarely came down on the side of those who wanted to escape the Caeliar's planet at all costs--and against those who disagreed. Seeing how this situation turned out was one of the few times I was genuinely stunned as a reader.

In conclusion, I am pleased with this introduction to the Borg invasion. The Borg have never been more terrifying than they are in this book, save possibly "Best of Both Worlds", and show they're not used up as villains. Gods of Night ranks with Star Trek: Online for Borg I just want to jump into the media to fight.