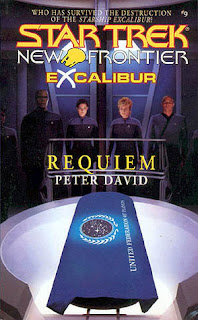 I am a huge fan of NEW FRONTIER and the series by Peter David is among there with the Dresden Files and Buffy the Vampire Slayer for some of the biggest influences on my writing. No one can quite combine genre fiction, humor, and rabid fire quips with dedicated use of continuity quite like these books. Star Trek: Lower Decks comes close but I feel the world of New Frontier is a bit better at managing it all.

REQUIEM is the first of the three EXCALIBUR books that follow up a bold and perhaps strange choice by Peter David to break up the entirety of the Excalibur crew. The Excalibur is destroyed, Captain Calhoun is presumed dead, and the crew is scattered across the Alpha Quadrant. These are both some of the best stories in the series and also the end of what I feel is the "classic" New Frontier stories as well since the series starts becoming darker after these are complete. For all intents and purposes, the "Five Year Mission" period of exploring Thallonian Space is over and a tighter continuity is imposed with events bound to get darker and darker.

I think my favorite part of the book is the opening where the crew is gathered together to mourn the Excalibur and discuss their future career prospects. Commander Shelby has the opportunity to command a new vessel and get the band back together. It's a shocking but believable twist to the tired and true formula that, no, she doesn't want Calhouns' ragtag band of misfits to join her on a new starship. I also really enjoyed Soleta confessing her Romulan blood to Shelby in order to draw out a racist reaction, only to find that Shelby may not want to work with her but still considers her a close friend.

However, there's also other subversive and interesting stories in this book that carry Peter David's usual wit and interest. Soleta attempts to meet her biological male tissue donor (and mother's assailant) who seems to have repented of his crimes. It could have been a saccharine story about her finding out anyone could be redeemed but the ending really threw me for a loop. Sadly, I don't think it fits with Soleta's later actions in the series and just flat out confuses me in how they relate.

There's also a parody I didn't realize I needed with Zak Kebron and Mark McHenry of the Men in Black and X-Files. They go to a Pre-Warp Drive world to investigate a series of alien abductions being conducted by rambunctious teenagers and Starfleet cadets that they have to put a stop to, only to get an even more strange set of company. It reminded me of an episode of Farscape and it was all the more entertaining for it.

Finally, we have a Si Cwan and Kalinda story that is straight out of martial arts epic but sadly it isn't resolved in this book but another. Basically, they're no longer in Thallonian Space so there needs to be a reason to have them leave it and seeking to murder a man who killed his master like Kill Bill's subplot is as good a reason as any. I kind of think that Peter David should have just written Si Cwan out of it or have him realize Thallonia has outgrown him, though.

The books biggest failing is the fact that it really does not cover everyone and it feels like a spin off rather than a proper sequel to the series. Part of the issue I have with Requiem is it feels like part one of a much-much larger book that I kind of wish it had been. It's a weirdly wacky Game of Thrones-sized one in my head and broken up for space. Basically, it should have been one large book than three small ones.

Still, if you love the characters of New Frontier then you will enjoy this diversion. Sadly, it still feels like a diversion and we never get back to the adventures of the Excalibur as we knew them.