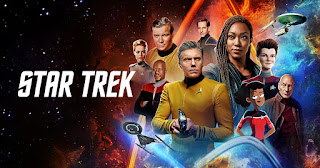 I admit I am a huge Star Trek fan, no duh, but I also am a huge fan of continuity. So I did this interesting little write-up for my Star Trek Adventures campaign where the player characters were time cops who were trying to figure out what had happened to the timeline. They came up with this information that explained away inconsistencies in the shows, which didn't NEED to be explained, but I was amused to do anyway.

Historically, the original timeline of humanity was TOS and that was how the Enterprise appeared before time was altered. Starships were big, blocky, and while sturdy they were not seemingly as advanced or visually appealing as before. Furthermore, Starfleet was significantly more militant and harsh.

Minor changes to the timeline happened during this period that were, despite Kirk's reputation with the Department of Temporal Affairs, relatively inconsequential to the timeline. The hobo phasering himself in "City on the Edge of Forever", the stealing of whales during Star Trek IV: The Voyage Home, and so on. The timeline's progression is largely without interruption, Edith Keeler's brief disastrous presidency in an altered timeline aside, despite Captain Kirk discovering time travel when he accidentally traveled three days back in time in "The Naked Time."

This event actually has much larger ramifications but set the stage for the second divergence point (see below). Nevertheless, already things are changing greatly as the human race encounters the Borg much earlier in "Regeneration." While the episode hints at a predestination paradox, it's much more likely to me that it is an example of how the timeline has already been greatly altered by events and will only get much worse.

Ironically, the biggest consequence of this event seems to be the fact that in an alternate reality, Zephram Cochrane was so impacted by events of First Contact that he slaughtered the Vulcan landing crew and stole their technology to build the Terran Federation ("In a Mirror, Darkly").

The second divergence point is far more dramatic due to the Temporal Cold War when the Suliban ROYALLY screwed up the timeline by accidentally diverting a Klingon to Earth in "Broken Bow." In the original timeline, Jonathan Archer was known as a test pilot and warp engineer who failed to get the NX-01 off the ground and the first Enterprise would not launch until the Constitution-class decades later.

Due to the Klingon's arrival, Archer gets his chance and suddenly the Earth enters space decades earlier and mucks with the timeline. This is why Daniels is so surprised the Federation ceases to exist in "Shockwave" if Archer is removed because Archer SHOULDN'T be that important. Originally, he was just a random NASA guy but is now elevated to George Washington as well as Neil Armstrong.

History proves robust and the Federation still unfolds much the same way as it did in normal history even with things like the Xindi War and a much friendlier relationship with the Andorians. The Federation forms out of mutual interest instead of a reponse to Romulan aggression. Technology gets a few decades leap ahead of itself and the USS Enterprise is now a much more advanced exploratory vessel with less focus on militancy.

This notably affected the Kelvin timeline as well.

Star Trek: Discovery and Star Trek: Strange New Worlds are the result of this new and revised timeline as is the first Klingon War that happens before the events of "Errand of Mercy." Events are still eerily similar and ironically are probably due to Daniels and other time cops trying to make sure things still are broadly the same. This sadly includes making sure Christopher Pike ends up crippled by his experiences.

Note: If you absolutely need an explanation, Robert April's father married another woman in changing timeline as well but is functionally the same man historically.

Notably, in the original timeline, Michael Burnham's family lived a perfectly normal life due to the fact the Federation (or Section 31) never developed an interest in time travel or stealing Klingon time travel crystals. The theft of the time crystals that triggered Michael's parents' murder happened only because Archer discovered time travel a century earlier than Kirk and widely advertised it. This resulted in Sarek adopting her and her sudden appearance in Spock's life, resulting in him being slightly more comfortable expressing emotions.

The second season of Star Trek: Picard seemed like it was hinting at a massive revision of the timestream but, in fact, actually doesn't change anything. Admiral Picard and his merry band of misfits are taken out of time when an encounter with the Borg goes disastrously wrong and transplanted to a dystopian version of the 25th century.

This "Confederacy" timeline only exists for the time that Captain Picard and his company are removed from the timeline by Q due to the fact that their adventure in Season 2# *IS* a predestination paradox. Admiral Picard notes that the bullet holes from Borgified mercenaries are things he remembers from his childhood. As such, all of their actions in the past help lay the foundation for the Federation in the future.

Does this mean the Confederacy timeline is the "original" timeline? Probably not. It is more like a bubble timeline that exists like the one in "Shockwave" where Captain Archer is briefly removed from time and a post-apocalypse Earth replaces it. It exists only as long as Captain Picard has been removed from the timeline until he goes back in time to save his ancestor.

Some questions exist but Q's powers can paper over most and presumably Doctor Jurati-The Borg Queen want to avoid a paradox by interfering with the Borg timeline leading up to the 25th century.

I hope this was educational!