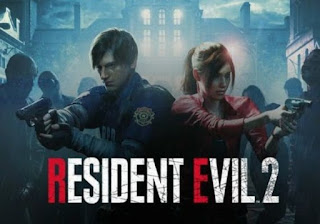 I am a huge Resident Evil fan. It is something that dominates my gaming love even though I am terrible at playing them. Seriously, I'm both a fraidy cat as well as terrible at puzzles as well as zombie hunting. I somehow managed to screw up playing Resident Evil 4 by not realizing you were supposed to fight all the enemies versus running away. Thus, I ended up running out of ammo and weapons due to so much being from loot drops. Yes, that has to be a special achievement for video game players.

Resident Evil 7 is the apex of my love of the series due to the fact that it managed to be incredibly scary but also easy enough for me to play it through. Despite this, I actually am really late to the party in playing this. Why? Because Resident Evil 2 was such a classic I wasn't sure I could return to it even with the fact it would be using the RE7 style of gaming. Also, despite the fact I have an unwholesome and weird teenage dork's lust for Claire Redfield despite the fact I turned 39 last year. Our love may be fictional but will never die.

Given this game was a massive success on every conceivable level and has helped usher in the RE franchise to the second decade of the 21st century. There's nothing I can possibly say which will probably make fans of the franchise pick this game up (as they already have). If you're not a fan of the series then I suggest you start with either the Resident Evil remake or Resident Evil 7, which are both great starting points.

So, really, this is just my impressions on the game rather than a proper review-review. It's a great game, you should probably get it (albeit after the other two). Claire Redfield and Leon Kennedy are the two most lovable characters in the RE franchise even more so than Jill Valentine (I'm not even counting Chris here). I actually wish Claire showed up more than she has and she got her own movie, Resident Evil Revelations 2, plus Code: Veronica.

The premise if you've somehow missed the entire series is that Racoon City is the suburban town on the Canadian border where Umbrella conducts the majority of its unnatural experiments. It is, unfortunately, overrun with tens of thousands of zombies. The Umbrella Corporation has lost control over the G-Virus (separate from the T-Virus) and everyone is going to die. As bad as this is, it's even worse for Claire Redfield and Leon Kennedy. Claire is looking for her missing brother Chris and Leon is joining the Racoon Police force on the worst day possible.

The plot is mostly an excuse to get you to the Racoon City Police Department that is an amazingly effective set piece. While it's a little strange that the place looks more like a art museum than a police station, full of secret passages and puzzles, I still had a lot of fun with the place. They've also changed it enough that there's at least bathrooms this time around. There are also a few more offices and holding cells to give the impression this actually could be a place where police work is done of the non-zombie hunting variety.

The tension in Resident Evil 2's remake is impressive as you have to deal with zombies coming in through the doors, mutant Lickers who are far more terrifying than the actual undead, and a sense that no place is truly safe throughout. In the original RE2, the character of Mister X was a minor presence and ultimately forgettable. Here, he's now a character that stalks you throughout the police station once he appears and he's terrifying. Well, kind of terrifying. He looks like an enormous blue-skinned private detective that could star in his own anime. He's actually kind of adorable.

Eventually, you'll escape from Raccoon City's Police Department and go on a journey to other locations like the Raccoon City Orphanage and either try to save the precocious Sherry Birkin (Claire) or deal with the beautiful Ada Wong (Leon) that is basically a woman that escaped from a Bond movie into a George Romero one. Generally, the game is structured so that you play one of the heroes before playing the other's adventures with a few continuity errors between. Indeed, the changes of what you have to do is part of the game's charm and replay value.

But for me, the game's appeal is the fact both Leon and Claire are incredibly charming characters on a surprisingly "realistic" set of reactions. Unlike characters in later games, this is all overwhelming and insane to them. They try and do what little they can to help their fellow survivors but it's as close to being trapped in hell as you're going to get. It's very different from Frank West who, even in the original Dead Rising, didn't have much reaction to events. It's also a matter of escape rather than day to day survival ala the Telltale Walking Dead games. Yes, these games drew from Resident Evil than the reverse but that's part of the fun.

I also think the Umbrella Corporation's ridiculousness is at just the right level of Bondian supervillain here. William and Annette Birkin didn't meant to create the apocalypse, so it actually has an appropriate level of horror. I also think the addition of the Raccoon Orphanage is appropriately horrifying as Sherry is a woman who struggles to escape the appropriately menacing Chief Irons in a stealth sequence that is some of the most hair raising in the game. We also find some truly twisted things they were up to with the city's lost and unwanted children inside. It's a big conspiracy but not quite as ludicrous as it would become with Resident Evil 5 and 6 or even Code: Veronica where they have their own secret island.

Speaking of Chief Irons, they actually made the character more terrifying this time around than the ertswhile Norman Bates analog from the original game. While he has inappropriately absconded with the Mayor's daughter's corpse, he's actually much scarier this time around due to the fact he seems to have kept most of his faculties. He's interested in escaping the city and making a fortune from what he presumes will be Umbrella bribe money. That's a much nastier and more disturbing villain than a Hollywood serial killer with a badge.

This plays like Resident Evil 7 for the most part but there's a lot of subtle changes that make it even tougher than the original version. Zombies aren't taken down by headshots anymore, even on Normal Mode. Instead, you have to put three or four headshots at the easiest to take them down permanently and it's just not worth it for the most part. Instead, you want to just disable a zombie whenever possible and dodge out of the way. It's a simple change but effective for making the helplessness of your situation all the greater.

The game has a wonderful set of unlockables for each of your accomplishments in-game with mini-games and campaigns available just like in the original. In addition to playing Hunk and Tofu, there's the option of playing four additional "survivors" from characters killed in the main campaign like the Mayor's daughter, the Reporter, the Sheriff, and a Umbrella mercenary. I've been enjoying these but kind of wish they'd went with canon stories.

Is the game scary though? I think it actually is probably scarier than Resident Evil 7. A game will never be scarier than when it is tense and this game is very tense. I don't think it can quite pull off the tension of Alien: Isolation or Outlast where you're utterly helpeless. The only section like that is Sherry Birkin's. However, I think they did a fantastic job in making zombies intimidating again as well as giving you a sense of dread as to what you're going to encounter next. There's just enough humanity to the characters that you care about them as well.

The big difference between Resident Evil and, say, Dead Island or Dead Rising is that there's a decent amount of effort to make at least some of the characters feel like they were formerly people. The designs of the zombies in RE2 Remake really make it clear every zombie was formerly a person. The story of William Birkin may be that he was an enormous pile of crap but he was still a person and that humanity makes his transformation into a monster all the scarier. The zombies here are not just a bunch of targets waiting to get shot. That's the real biggest appeal of the story and part of what made the Baker family so good as antagonists.

In conclusion, this is not only a solid game but it's a magnificent game and I had an amazing amount of fun playing it. I'm looking forward to playing a similar experience with Resident Evil 3 this year with Jill Valentine having her adventures updated for 2020. Am I unhappy this is distracting from Resident Evil 8? Not in the slightest. This feels like a new game and it doesn't need all the baggage from the somewhat ridiculous timeline that has since emerged in Resident Evil canon, as much as I love it.