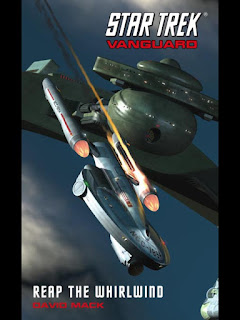 REAP THE WHIRLWIND is the third volume of the Star Trek: Vanguard series that follows the adventures of the Starbase Vanguard's crew. I was very fond of the first novel in Star Trek: Vanguard (Harbinger) and less fond of its sequel (Summon the Thunder). Part of this may be do to the fact that Vanguard is like a television series and has multiple writers each bringing their different perspectives as well as styles to the story.

The premise for Star Trek: Vanguard as a series is that the 23rd century Federation has found a fascinating scientific miracle in the Meta-Genome, a piece of incredibly complicated biological life that could be used to create just about anything [and is later revealed to be incorporated into Project: Genesis]. Not wanting to alert the Klingons to their find, they have established a space station in the region and opened it up to colonization as a cover for their research. This despite how fantastically dangerous it is.

Reap the Whirlwind, as its title implies, shows the consequences for this horrible idea. The Federation has a colony on Gamma Tauri IV that is unwittingly in the path of the Klingons, Tholians [who consider the region akin to the Great Old One's resting place], and the Shedai [who are akin to Cthulhu and his ilk]. The Federation can't warn them without breaking operational security and aren't fully aware of what they've unleashed.

I've commented on how much I love the Star Trek: Vanguard series that is immensely detailed and has a lot of themes that are not commonly found in Star Trek. Starfleet is depicted as callous, militant, secretive, and engaged in realpolitic rather than being the idealistic organization of explorers. The characters are various kinds of broken individuals as well, full of flaws and mixed loyalties that sometimes explode in their faces.

This may bother some people but I admit I like this simply as a contrast to the typical depiction of Starfleet as a bunch of superhuman Captain America science types. Everyone here is immensely flawed and full of the conflict that Gene Roddenberry hated. It also makes them immensely more relatable. There's even a scene that is based on Clerks where a bunch of workers are debating whether they can make an ice hockey rink on an alien planet in their break time (and can't because it's not that kind of Star Trek). It's a humanizing moment and one that stuck with me long after I finished the book.

The chief plot that interested me this book is the settling of Gamma Tauri IV by Jeanine Vinueza. Jeanine is an arrogant and condescending woman who is every bit as convinced of her righteousness as a typical TNG officer. She wants to keep the Federation off her colony despite the presence of Klingons and doesn't head any of the warnings by her ex-husband Reyes. Reyes can't tell her specifics but she's so full of herself that she throws caution to the wind with horrific results. The fact she's an esper (psychic) makes her feel even more entitled to know people's secrets.

I was also fascinated by the plotline of Commander T'Prynn and Anna Sandesjo (Lurqal). T'Prynn is a lesbian Vulcan working a similarly sapphically inclined Klingon disguised as a human in the local embassy. Anna has completely fallen for T'Prynn and wishes to make their romance "real" while T'Prynn continues to treat her as an asset. Unfortunately, T'Prynn's psychological state is in a state of collapse due to a doctor's well-meaning attempts to discover the source of her headaches: which are linked to her falsifying her medical records.

Part of what makes the book so damned good is the fact that the safety rails are completely absent this time around. I don't mean to say characters die, though some do, but they fail in an epic Rob Stark manner. This is not the kind of story that Star Trek often tells with the exception of that time Kirk got most of his crew killed in the Wrath of Khan. The fallibility of the crew and unwillingness to bend to accommodate situations they don't fully comprehend is stuff that makes the dramatic stakes all the higher. Starfleet has awoken an ancient evil in the Shedai and don't seem to realize that Godzilla is stomping around their backyard. The only reason he hasn't destroyed their cities yet is because Godzilla is on their side, fighting the other equally horrible monsters--for now.

We get a lot more information about the Shedai this time around as well as how their empire fell. Despite how alien and terrifying they're depicted as, they're not treated as purely evil. At least half the Shedai seem to be reasonably different sorts. The Apostate is also shown to be a powerful yet noble figure even if thinks the Tholians weren't so much enslaved as malfunctioning tools or rampaging cattle. We also get some awesome moments that demonstrate just how terrifying they are when their power is fully unleashed. They aren't quite the Q or even the Organians but they're close. Starfleet is messing with the Vorlons and Shadows and don't even seem to realize it.

A lot of good stuff happens in this book from epic planetary battles, revelations about the mysterious Shedai race, stuff that couldn't happen on a TOS television budget, and more. There's even comedic bits like the Klingons discovering their ship's toilets have been sabotaged. This is a great book and I recommend everyone pick up the Vanguard series to enjoy its unique take on the Federation during its early years.