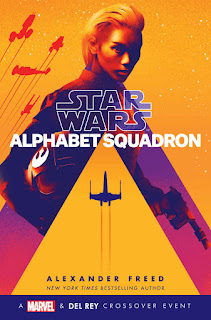 ALPHABET SQUADRON by Alexander Freed is a book that I was very eager to get into because it struck me as just up my alley. I've always been a huge fan of the Star Wars starfighter stories with Rogue Squadron, Wraith Squadron, the old TIE Fighter video game, and the recent Star Wars: Resistance. I also enjoyed the previously written Twilight Company by the author. Freed has a somewhat unromantic view of war as well as the Rebel Alliance's fight against the Empire. It's unsurprising he also wrote the adaptation of Rogue One where the cause is just but the people are flawed.

Those who prefer a slightly more adult take on Star Wars will probably enjoy Alphabet Squadron. The Empire is still evil and the Rebellion (now New Republic) is still good but things are a bit more gray with the protagonists. Individual rebels don't necessarily care about the greater politics at work, may be personally reprehensible, or are flawed in realistic ways like wanting the credit for a big propaganda victory over just winning the war (now that the war is "won"). The Imperials are similarly humanized in a way that almost makes them worse. They engage in some of the worst atrocities of both Legends and NuCanon with no real consideration of the billions they're wiping out. It's just another day at the office for them.

The premise is Yrica Quell (pronounced "Erica Quell"), is a former Imperial TIE fighter pilot. An elite, she was an ace in the service of Shadow Wing, that seems to have been one of the Empire's best and brightest. After Operation: Cinder, she defects to the New Republic because even she can't stand the slaughter anymore--or so she said. After an ugly stay in a prison camp, Yrica is recruited as an informant on her former squadmates. Yrica eagerly cooperates because she can't stand the thought of not flying anymore and does her best to adjust to the free-wheeling individualist New Republic's military.

Yrica is an interesting character because she's a subversion of a lot of common Star Wars archetypes. Bluntly, she's not particularly likable and not even in a bombastic Imperial villain way. Yrica is a socially awkward reserved woman with questionable leadership skills and almost no real interest in politics. She joined the Empire in hopes of defecting to the Rebellion, only to find herself deciding just to fit in instead. Even after Operation: Cinder, she can't really wrap her head around the greater struggle but just wishes her life was more structured like it had been in the Empire.

I'm neuroatypical myself and while it's unlikely that Star Wars has the same sort of categories for mental health as we do here, I wouldn't be surprised if she was written with the idea she's on the spectrum. Yrica is also one of Star Wars many new queer heroines (Doctor Aphra, Sana, Tolven, Lana Beniko, and others joining her) w/ references to both boyfriends as well as girlfriends. It's interesting to see fan favorite Hera Syndulla take Yrica under her wing, fully supporting her, and have the reader question whether this is wrong. Yrica is not a good leader and may actually belong in prison for her actions rather than receive forgiveness but that's just part of the book's deconstructive charm.

The rest of Alphabet Squadron is composed of a similar band of misfits as Wraith Squadron: Nath Tensent (criminal Rebel), Wyl Lark (heroic farmboy), Kairos the mysterious, and Chass na Chadic (suicide martyr). The difference is that all of them are, well, terrible at coming together. They hate each other and their personality disorders make them less effective soldiers rather than a lovable band of rogues.

It doesn't help that Yrica really misses the quiet professionalism of the Empire. You know, where individuality was stamped out and every pilot was disposable parts that could be easily replaced. As Hera says to her, her team doesn't know she'd fight for them and she doesn't know if they'd fight for her. They also have a floating ball torture droid as their therapist (I assume Wes Janson must have put this squadron together).

The book's deconstruction of traditional Star Wars stories of A-team like oddballs coming together as a family then blowing up the Empire is both its strength as well as its weakness. It's a story that goes in surprising directions but also you kind of miss when Star Wars was about the glorious victories of the good guys over the bad. Yrica just can't wrap her head emotionally around the wrongness of the Empire even when she intellectually knows they're monsters. She's a soldier because that's her job, not because she's ever wanted to protect people.

I also feel like this book suffered for the fact we don't have much perspective on the Imperial soldiers in the book. Shakara Nuress is the central antagonist of the book but barely appears, though those few scenes where she does are some of the best in the book. This isn't the kind of book for scene-chewing evil but I would have appreciated some more perspective from those still fighting the good fight against the Republic. Perhaps the author felt Yrica provided all the perspective they needed since she remains Imperial in mindset throughout.

There's a lot of great starfighter action, impressive set pieces, and genuinely moving meditations on war as well as what people fight for. One of my favorite parts of the book is the encounter of the team with the Jedi Temple. Few of the pilots even know what a Jedi is but have started to become inspired by Luke Skywalker's legend (another is already inspired--in all the wrong ways--by Jyn Erso's). Its simple beauty and loveliness shakes Yrika's faith in the Empire even as she wonders if the Rebellion/New Republic is going to become a theocracy (because she does not understand them at all).

In conclusion, this is a pretty good for a harder and grittier Star Wars novel. The protagonists are not trying to blow up the Death Star but simply remove a elite fighter wing (the twist there is impressive--no spoilers). They make mistakes, they don't always succeed, and they kind of do need to get their bantha poodoo together. Not everyone will learn the right lessons and some will get better than worse. It's a great insight into the year following the Battle of Endor but before the Battle of Jakku. I'm actively looking forward to the other two books set to be released in this years despite my few (minor) issues.
Posted by CTPhipps at 2:22 PM