SCPD: The Case of the Claw by Keith DeCandido review 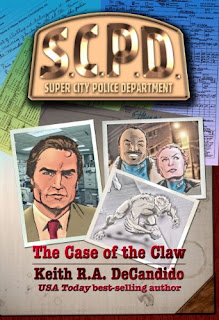 SCPD: THE CASE OF THE CLAW by Keith Decandido is an excellent work that I wish I'd known about earlier. The reasons are three fold. The first is that I'm a fan of Keith Decandido's writing with things like his work in Star Trek and World of Warcraft being ones I've often enjoyed. The second is that I was a big fan of Gotham Central which this series superficially resembles. Readers of both my reviews and novels will also know I'm a huge fan as well as producer of prose superhero fiction.

SCPD, for those unfamiliar with it, is a series chronicling the activities of the Super City Police Department. The Case of the Claw was published by Crossroad Press and seems to predate Super City Cops, which is a series following the same characters and universe but is a separate trilogy. Confused? Eh, that's just how the system works sometimes. In any case, I'll be picking up the later due to my extreme enjoyment of this volume.

The premise for the novel is Super City is basically a kind of City of Heroes-esque universe in that superheroes are bright, colorful, and famous but not entirely a part of the day-to-day lives of your average citizen. While they're dealing with alien invasions, Dimension X, and other matters--the regular police are still dealing with things like muggers as well as pimps. Worse, the regular police also have to follow up every one of the superheroes' cases as well as investigate the supervillains with none of the credit.

This comes to a head with the return of a mass murderer named the Claw, who has a history of being a spree killer in the city. The superheroes are remarkably tight lipped about this one and have closed ranks, which makes the cops suspicious even as the body count keeps piling up. Our protagonists are the gumshoes and flatfoots of the SCPD. The Homicide and Narcotics Detectives who walk the beat where folk like Spiderman or Superman exist. It was a great idea in Gotham Central and it's a great idea here.

The protagonists occasionally verge on stereotype but in superhero comics, that's not necessarily a bad thing. They're meant to be familiar archetypes of police officers and the casual mixture of 70s Dirty Harry-esque cops with 80s-esque buddy comedy cops as well as modern techno-savvy ones makes it feel like an eclectic mix you'd find in Metropolis or Gotham City.

I saw the twist with the Claw's identity coming from a mile away but that's due to my familiarity with the tropes of comic books. It wasn't the "truth" of his identity which was the point either but how the various characters reacted to it. You could tell how disappointed and shocked some of them were by the discovery. That kind of emotional beat is rare enough in the superheroes genre and all the better here.

In conclusion, this is a great book for those who love superhero novels and something I recommend to people who enjoy taking advantage of prose fiction. In this universe, superheroes and villains can die or change or be disgraced forever. It's not limited by the conventions of the unlimited comic publishing cycle and all the stronger for it.