I've got a great interview with Bobby Derie, author of SEX AND THE CTHULHU MYTHOS. Which, sadly, is not a book about the benefits of cross-interspecies mating but an analysis of the handling of the role of sex, gender, and relationships in the works of Howard Phillips Lovecraft as well as his immediate successors. 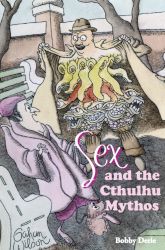 Honestly, the book is one of the better H.P. Lovecraft nonfiction volumes I've read and is full of careful research on a subject a lot of people have thoughts on but few have ever taken seriously. It also adds a lot of interesting commentary on the role of sex in horror as a whole. You can read my review of it here.

My dad got me into it fairly early; I was about nine when he gave me a copy of a Del Rey Lovecraft anthology, and I would raid his shelves to read the Call of Cthulhu Fiction anthologies from Chaosium he had.

2. What compelled you to write Sex and the Cthulhu Mythos?

I was coming to the end of graduate school, and wan't to research and write something before I lost access to the university library. I decided to do a monograph on sex and H. P. Lovecraft, simply because it hadn't been done before, and started collecting material - it turned out to be a much bigger project than I first imagined.

3. Could you tell us about the book and what it contains?
The book is divided up into four chapters. "Sex and H. P. Lovecraft" examines Lovecraft's attitudes towards love, sex, and gender - his sexual education, sexual experiences, thoughts on miscegenation and homosexuality, and some of the legends about Lovecraft's sexuality that have accrued over the years.

From there is moves on to "Sex and the Lovecraft Mythos" - a story-by-story in-depth look at love, gender, and sexuality in Lovecraft's weird fiction, including the common themes and some of his immediate precursors, Edgar Allan Poe and Arthur Machen. "Sex and the Cthulhu Mythos" is a broader survey of sexual material in the Mythos fiction of Lovecraft's contemporaries and literary heirs, from Robert E. Howard and Clark Ashton Smith to Alan Moore and Edward Lee. "Beyond Cthulhurotica" is looks at sex and the Mythos in other media - especially occult literature and cinema, as well as comics, art, etc.

4. How did you go about researching that book?
Based on my initial familiarity with Lovecraft's fiction, I worked up a broad outline, then started digging into the subject, working through all of Lovecraft's letters and critical literature available at the library and online. That turned up some other sources, some of which were quite tricky (and expensive!) to source - the multiple volumes of Lovecraft's published letters, small Arkham House releases, amateur 'zines, some truly esoteric pornography, and a vast amount of material to go through for the survey of other authors. I ended up expanding and revising my outline multiple times. In the end I had far more material than I could use, but I wanted to be as rigorous in sourcing material as possible.

5. How has the response been to your novel so far?
Not bad! While it hasn't won any awards, Sex and the Cthulhu Mythos has garnered mostly positive reviews online, as well as in the small journals and academic press. Definitely not setting the world on fire, but it's a niche subject. Ironically, I get more comments on the title and the fantastic Gahan Wilson cover than the contents.

6. Is there any area of the book you're particularly proud of?

I struggled very much to find the correct words when writing about Lovecraft's thoughts on miscegenation - but ironically, that's one of the more well-received sections of the book. Racism as a whole has never been a subject I've been comfortable with, but then sometimes the reason we need to read, think, and write about these things is because they are uncomfortable.

7. What are the challenges of being a Lovecraft scholar?

The initial investment. I think a lot of people have an idea that most "Lovecraft scholars" are just promoted fanboys voicing their own opinions. The people that are eminent in the field - like S. T. Joshi, David E. Schultz, Kenneth W. Faig, Jr., Robert M. Price, etc. - have put a huge amount of time and personal resources into primary research, and anyone entering the field has to be prepared to wade through the equivalent of a master's degree in order to really get a handle on the state of things - which is both time-consuming and expensive. There are over eight thousand pages of Lovecraft's letters that have been published, not counting any of the critical literature. Joshi's biography of Lovecraft is over 1,100 pages. So it takes quite a bit of reading just to begin to have an informed opinion.

8. Who are your favorite non-H.P. Lovecraft Mythos writers?
The Big Two are Lovecraft's contemporaries Robert E. Howard and Clark Ashton Smith - neither of whom wrote exclusively in the Mythos; they were both pulp writers in their own rights, and contributed to the growing Mythos. Lovecraft borrowed from them as much as they ever borrowed from him. Aside from those two, my favorites include W. H. Pugmire, Caitlin R. Kiernan, and Joseph S. Pulver, Sr. - writers whose prose is as evocative as well as Lovecraftian.

9. Would you recommend any Neo-Mythos material?
Quite a bit, actually! The 21st century has been a boom period for new Cthulhu Mythos material, much of it quiet daring. Anthologies tend to be a little hit-and-miss with me, but many of the individual stories grab me - Alan Moore and Jacen Burrows' work on Neonomicon and Providence, Scott R. Jones' When the Stars Are Right, Molly Tanzer's A Pretty Mouth, Brian Keene and Nick Mamatas' The Damned Highway: Fear and Loathing in Arkham, Silvia Moreno-Garcia's "Flash Frame" - and, as a guilty pleasure, Edward Lee's exquisite Trolley No. 1852. A lot of these really break the mold of what Lovecraftian fiction can - or should - be, and that's a good thing.

10. What do you think is Lovecraft's greatest contribution to horror?
A lot of people was say the Necronomicon, or the sense of cosmic horror that he defined in his essay "Supernatural Horror in Literature," or just the shared universe he created, letting other people play in his pond. However, I would say that Lovecraft's greatest contribution to horror was himself - he spent so much of his time and energy encouraging other writers, many of them just teenagers starting out; he was tied in to the early fantasy and science fiction fandom at pretty much the very beginning, contributing material to Marvel Tales and The Fantasy Fan, promoting the work of Robert E. Howard, Clark Ashton Smith, and Catherine L. Moore, encouraging the efforts of August Derleth, Donald Wandrei, Robert Bloch, Charles D. Hornig, Henry Kuttner, James Blish, and others...and those folks remembered. Lovecraft still draws new readers in, instilling an interest in weird and horror fiction. You can't really ask for a greater contribution than that.

11. Is there any element which annoys you about Lovecraft's treatment by fandom?

Every fandom has its internal politics and cliques; Lovecraft fans are no different, and most of them are harmless. The only element which truly annoys me - and thankfully they are few and largely shunned - are those that support and advocate the racist views that Lovecraft held in life. Lovecraft developed and held onto those views during a time period when they were widespread sentiments, often encoded into law and scientific racialism, and died before the horrors of the Holocaust or the Civil Rights movement in the 1960s; it is too much to say that he could not have - or should have - known better, anyone living today has no such excuse. 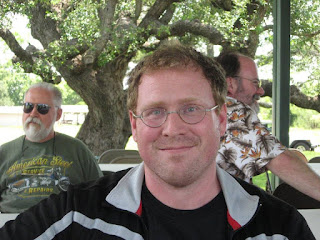 12. What's your favorite of Lovecraft's creations? Story and monster.

My favorite Lovecraft story is "The Picture in the House" - which for me, was a great little microcosm of Lovecraft's actual craft of writing a story; in seven and a half pages you get about as complete a tale as you could hope for, with all of the quirks of language and storytelling that define what people find glorious and terrible about Lovecraft's prose. You either love it or hate it, and I love it.
Favorite monster has to be Shub-Niggurath - the Black Goat of the Woods with a Thousand Young! What other creation has inspired so many interpretations, despite never actually appearing anywhere near the scene of events? It's just a wonderfully evocative name and epithet (if indeed, epithet it is), the kind of thing that sent Ramsey Campbell sprawling for tidbits of eldritch goat-lore in his earliest Cthulhu Mythos stories. Shades of Satan and Baal-Pteor, Gaia and the Magna Mater, the Great God Pan and Giger's alien queen.

13. Why do you think Lovecraft's work has such staying power?

While a lot of folks find it hard to read through some of Lovecraft's archaic diction and racist sentiments, I think most miss that Lovecraft was really writing to a contemporary audience using his best understanding of science and philosophy, and the emotions he was seeking to evoke in his stories are still very much the fears that we have today. We are not so superior to the people of eighty years ago who first read "The Shadow over Innsmouth," and shuddered at the implications of alien miscegenation. Many of the underlying fears and attitudes that Lovecraft spoke too are very much a part of our cultural fabric, and that as much as anything I think is why it still resonates.

14. What's your experience with Lovecraft fandom?
Mostly through the internet. While I've slung my die with many Call of Cthulhu roleplaying gamers, I just rarely get a chance to interact with fellow aficionados directly in the flesh - but we tend to congregate quite readily online! Overall I would say my experience has been mostly positive; I've made few enemies that I know of and pissed off only the right people.

15. What can we expect from you in the future?
I'm currently working on a follow up sorts to Sex and the Cthulhu Mythos, with the working title Race and the Cthulhu Mythos. Where Sex looked at love, gender, and sexuality, Race will look at racism, racialism, and prejudice - both in Lovecraft's life and fiction, and the wider implications for weird and horror fiction beyond Lovecraft. In an era when many people have a very superficial understanding of Lovecraft & co.'s beliefs regarding race - and when it has become such a point of controversy - I think such a volume is necessary. Lovecraft deserves neither demonization nor apologia, but something much more difficult: understanding.
Posted by CTPhipps at 10:02 AM