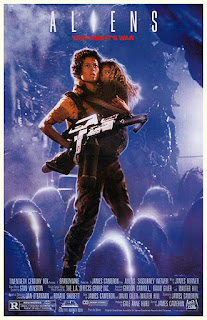 It's Alien week here at the United Federation of Charles and we're going to discuss the second installment of the franchise which was, in my opinion, one of the single-most influential movies of all time--for video games. Aliens inspired Halo, Metroid, Contra, Doom, Dead Space, and (I kid you not) Echo the Dolphin. Indeed, there's a ridiculous number of common elements in video games which come directly from Aliens. There's an excellent article on the phenomenon by Gamesradar which I heartilly recommend.

So what is it about Aliens that seems to have tapped into the pure unbridled joy centers of fourteen-year-old-boys and (as found out when my kind stopped thinking of them as a separate species) similarly-aged girls? The answer to this query is manifold but it is basically boils down to combining all of the tropes of a war movie with that of a monster film.

It switches the response of confronting a creature as utterly hostile and dangerous as the xenomorph from flight-to-fight. Indeed, the entire movie is about that for our heroine in Ripley. It's the same reason why Terminator 2 (also by James Cameron) has such a similar effect on viewers. For teenagers and, to a lesser extent, adults, there's nothing quite like confronting then triumphing over the feeling of helplessness from a familiar monster or anxiety.

Aliens isn't a 137 minute slaughter of xenomorphs, though. Quite the contrary, the movie is a massive subversion of where it could have gone. The movie sets up a confrontation between hardass Colonial Marines armed with supertech from the future and the creatures which terrified us in Alien. You know what the result of that confrontation is? The Colonial Marines getting their asses kicked every which way from Sunday. The xenomorph are a threat, not easily conquered and it's right to be afraid of them, but the rest of the movie shows the value of continuing to stand up against them.

Regardless of the (heavy) cost.

Even so, the movie wouldn't be nearly as good if not for the character development and plotting for not only our protagonist but the rest of the cast as well. Ripley goes from being a traumatized survivor to a badass, Gorman learns the price of his incompetence, Newt struggles to regain her humanity, and the Marines all learn a lesson in humility before nature. I mentioned there's not a single bad performance in Alien and that continues to be the case in its sequel. Sigourney Weaver, Michael Biehn, Paul Reiser, Lance Henriksen, Bill Paxton, William Hope, and Jenette Goldstein all do amazingly good jobs.

While some people complain about Carrie Henn's Newt, I say screw these people and mark her for best child performance alongside Kirsten Dunst in Interview with a Vampire. Even the short-lived monster-fodder makes an impression with Al Matthew's Sergeant Apone sticking with viewers long after he ceases to be anything but xenomorph chow. The writing for all of these characters certainly helps as this film ranks with Star Wars for imminently quotable lines.

Game over, man, game over.

We have to nuke the site from orbit, it's the only way to be sure.

They mostly come at night. Mostly.

Part of what makes the movie works is the premise actually shows far more interest in Ripley's character journey than the brainless monster shooter could have been. The premise begins with Ellen Ripley (Weaver) awakening fifty-seven-years after the events of Alien. Having recovered from hypersleep, she's lost everything and treated as a pariah due to her unbelievable story of encounters with a super-hostile life-form.

A seemingly-helpful Weyland-Yutani executive named Burke (Reiser) believes her and gently blackmails/bribes her into accompanying him along with a troop of Colonial Marines to investigate a colony which has gone dark. A colony built on the same world which they first encountered the xenomorph on. When they arrive, no surprise, it is infested with the monsters and the only survivor is a young girl named Newt (Henn).

As a child, I was more interested in the Colonial Marines and xenomorphs than Ripley but as an adult I find her story the most compelling. Having survived one of the worst situations imaginable, she's left with absolutely no support from society which blames her for her victimization (no possible applicability to other topics here, no sir). Deprived of her family and loved ones, Ripley ultimately finds the strength to forge a new identity and family from the chaos which attempts to rip her life away. It's a powerful message and as strong in Aliens as it would be, again, in Terminator 2.

I also give credit to the special effects and designs which made the xenomorphs not only more mobile on screen than in the original but enhanced our knowledge of their life cycle. The Xenomorph Queen was terrifying and while individual xenomorphs aren't as scary as they used to be, they make up for it in sheer numbers. The colony may only be a mass of corridors and a few labs but you never doubt it's a real place on another world.

I also state the movie did a good job of expanding on the mythology of the world with Weyland-Yutani getting its exact level of influence shown. It can command military detachments, runs entire colonies, and generally serves as the British East India Company in Space. Burke is a delightfully slimy character, managing to come off as a completely believable corporate douchebag as well as a dangerous enemy (or friend if you serve his interests).

Between the theatrical release and the Special Edition, I have to recommend the Special Edition. The added material related to the colony, Ripley's daughter, and other material really brings the story's poignancy alive. While so many people are focused on the action, the appeal of Aliens is there's plenty of context for that action. It's less about the violence than how the violence affects all of the characters involved. We know the victims and it makes the story stronger for it.

There's just so many memorable moments and character beats throughout the film it's hard to talk about just one. There's visual ones like the investigation of the colony and discovering they gave a better fight than most people might have against the xenomorphs, loud ones like Hudson's increasingly incoherent ramblings, and shocking ones like the xenomorph cutting the power. These don't include such iconic scenes as Ripley going after Newt in both the hive and the spaceship or watching the xenomorphs use tactics to fight the Marines in the reactor chamber.

In conclusion, Aliens is just a great damn movie which appeals to teenagers as well as adults. I still have some of my toys leftover from when I first saw it. While I can't say this is better than the original, I do think it's one of the rare cases which it's every bit as good.