We have an extra-special guest today with author SETH SKORKOWSKY, who is returning to our website from previous interviews (here and here). Seth is the author of the urban fantasy series Valducan and sword and sorcery series TALES OF THE BLACK RAVEN has recently released a second novel in the later series, SEA OF QUILLS.

SEA OF QUILLS picks up not long after the events of MOUNTAIN OF DAGGERS, following Ahren as he attempts to deal with the fact he's still wanted for murder by powerful nobles. Worse, being the best thief in the world means people are always trying to prove themselves better. Dueling with pirates on the high seas, trying to kill immortals, and breaking out of inescapable prisons are all in a days work for the Black Raven.

But maybe, just maybe, his luck is about to finally run out. 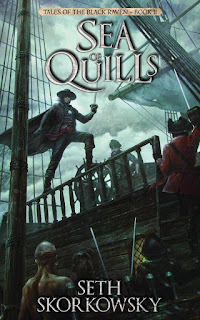 Now onto our interview!

1. So, what can you tell fans out there about SEA OF QUILLS?

SEA OF QUILLS is the second collection of stories following a thief called the Black Raven.  While readers familiar with the first book will get to expand on what they already know of the world and characters, because its written in the pulp fashion, every story is a self-contained adventure. Like with Indiana Jones or Conan, you could start with almost any one of the stories, quickly understand what's going on, and dive straight into the adventure.
2. What makes Ahren different from other fantasy protagonists out there?

Ahren's dominate traits are loyalty and pride.  He strives to be the best at what he does, whether that's sailing or thieving.  His loyalty is actually his biggest hindrance because it's sometimes misguided.  He's not a very good sword fighter. Instead, he relies on disguises and stealth.  To him, the thrill of the game and the knowledge that he's the best is what motivates him.  Even though he lives in a very immoral world, Ahren has a definite sense of right and wrong. He's a hero, but he's still a criminal.

3. He went through the emotional ringer in MOUNTAIN OF DAGGERS, how has his character developed since then?

Ahren grows in each story. While most of these are self-contained adventures, there were a few instances that will have a permanent effect on him. In MOUNTAIN OF DAGGERS, Ahren was confronted with two major obstacles. The first, is that his biggest fear is losing his freedom as his rank and reputation in the Tyenee grows. We will continue to see his struggle to maintain his independence. The second is with a demon that has taken everything from him. However in that confrontation, we watched Ahren overcome his terror, and is now ready to face it again head-on.
4. How would you describe the world Ahren and company inhabit? What were your inspirations for it?

The world consists of unique city states that together form loose nations. The cultural inspirations are based on Eastern Europe with some Spanish and Italian influences.  Beneath this, Ahren belongs to a criminal syndicate that stretches between these cities and nations. This allows Ahren to regularly travel from location to location as he's sent on various missions and adventures.
5. Will we see any returning characters other than the protagonist?

A few. Ahren will get to team up with Volker again for a few adventures. He'll also get a chance to cross paths with his love-interest and rival Polnoch. 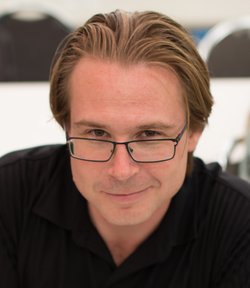 6. Do you have any favorite characters from the new volume?

Volker. We got to meet him in The Porvov Switch and I had a lot of fun with him. This time, we get to see a lot more of the big guy. He's a fun character and I really enjoy playing him and Ahren off one another.
7. Will we see any new love interests for a character you've described as "Fantasy James Bond"? How is Ahren's love-life?

As with any good pulp hero, Ahren finds himself in the company of several new love interests. Sometimes they try to kill him, but that's just part of the life, I suppose.  His major love interest, and frequent advisory, Polnoch will also make her appearance to match wits with Ahren again.
8. What inspired you to write a swashbuckling fantasy series like TALES OF THE BLACK RAVEN?

I have a huge love for the old pulp heroes and adventure-based fantasy like those of Robert E.Howard or Fritz Leiber.  Black Raven began with only one story with no intentions on a series. Then after a trip to Venice, I penned Race for the Night Ruby. Once the dam was broken, more ideas came and I started writing more and more adventures. They weren't even written in order. Several of the stories were published in small presses, and eventually I had enough that I assembled them into the two collections. The biggest challenge with them is that I want each story to be very different with fresh challenges and new ways for Ahren to overcome them.
9. If you could have Ahren interact with any other character from the history of fantasy fiction, who would you choose?

I think I'd have a lot of fun dropping Ahren into Lankhmar, and pitting Ahren against Fafhrd and the Gray Mouser.  I'm sure it would result in a few fights, some chases, and harsh language before they finally ended up at the Silver Eel and laughing about how much fun they had.
10. So, how has the reception been for TALES OF THE BLACK RAVEN?

Reception has been mixed but good. It's not a conventional storytelling style anymore and readers have either loved it, hated it, or not really known what to make of it.  It's a huge deviation from my urban fantasy series, so some prefer my Valducan novels while others prefer Black Raven. I've found it really cool how readers have gravitated to different Black Raven adventures as their personal favorites.
11. What can we expect from you in the future?

Right now I'm about 75% though my first draft of IBENUS, my third Valducan novel.  I have a couple Valducan short stories that will be coming out, that expand on the history of the Order and the weapons. I have a whole lot of new materiel that I've been working on, both Black Raven and Valducan, as well as a entirely different and super-secret project.

You all have been great. Thank you for all of your support and I hope you all enjoy what adventures I have in store for Ahren and the Valducan team.

Thanks for talking with us!