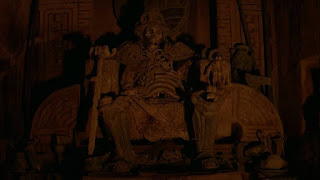 Grimdark is in the eye of the beholder.

On a more simpler term, grimdark is a term which was initially bandied about by the gaming community of science-fiction and fantasy as an insult for books which were "trying too hard to be taken seriously."

The term originally comes from the over-the-top hardcore dystopian science-fiction/fantasy setting Warhammer 40K. However, something (black) magical happened when a lot of fans who enjoyed the titles so referred started to use it as a positive descriptor of the fantasy they like. Grimdark, to the horror of grimdark hipsters everywhere, became mainstream.

Worse, a compliment. And yes, I just said, "grimdark hipsters." Which, if you know anything about grimdark and its fandom is both deadly insulting as well as completely accurate. Because, really, no one hates hipsters more than other hipsters.

Unfortunately, the fact is undeniable that grimdark is now everywhere. Superheroes used to be considered a childish pastime taken seriously only by a handful of overgrown kids. Well, now it is considered to be a license to print gold with the Marvel Cinematic Universe and should have been so since the 1989 Batman with Michael Keaton. Grimdark fantasy has taken over the television set with HBO's Game of Thrones, AMC's The Walking Dead, and DC comics' horrifically misguided attempt to make every superhero movie darker and edgier than Batman Begins, starting with Man of Steel.

Dark is in, baby. Not that it was ever out, per se. Especially among geeks.

So what is Grimdark fantasy? Well, if someone needs to define it then it might as well be the memetic sex god and author supreme that is myself. Well, maybe Mark Lawrence (Broken Empire Trilogy, Red Queen's War), as he defines here, but why would you listen to him? In any case, I'll define it as, "Gritty, adult, dark science fiction and fantasy."

See? I put gritty, adult, and DARK in the definition. That's THREE adjectives to EMPHASIZE.HOW.HARDCORE.IT.IS. *fist pump* Extreme, baby. Grognard (which if you get, you're not only a gamer but an old gamer). Some individuals may find this definition unnecessarily broad but, let's face it, that's kind of the attitude which gave rise to it in the first place. Grimdark was adopted by its fans as a term to set its readership apart from those who preferred more safe, conventional fantasy.

I'm not sure who these fans are because I don't think they actually exist. The father of grimdark fantasy isn't George R.R. Martin, in my humble opinion, but John Ronald Reuel Tolkien when he looked around and said, "Dammit, people, why the hell does everyone keep thinking fantasy is for kids? It's hardcore, baby, hardcore!" Okay, he didn't quite say that, but the sentiment was there. He wrote The Lord of the Rings because he was sick and tired of fantasy being dismissed as children's stories. Then he went on to write the greatest children's book of all time in The Hobbit but irony is a female warg.

Fantasy has always been gritty and dark, really. J.R.R. was so upset about it being regulated to children's fiction because he had a classical education (as well as the ability to walk and chew bubblegum at the same time). The Epic of Gilgamesh was full of sex and violence as the primary fuels, which passed onto The Illiad and The Odyssey. The unsanitized versions of Arthurian myth aren't what you hear about usually either. Hint: infanticide is not normally associated with noble and just kings. Beowulf is a poem which includes a lengthy dissertation on why marriage alliances are a stupid way of making peace. Not exactly something meant for the kids.

The fathers of science fiction like Jules Verne and Wells wrote for adult audiences with books against militarism and imperialism in a way designed to slip past the cultural censors blind to the nasty critiques things like 20,000 Leagues Under the Sea really were. Certainly, teenagers were the primary audience of the Golden Age of Science Fiction and Fantasy's articles but they were written by adults who went on to write for themselves. It's just we keep need to learning the lesson because someone, I don't know who, tries to believe escapism isn't for anyone over the age of fourteen. We might have that man finally beat but I wouldn't count on it.

Really, any escapist work can be grimdark depending on where you stand and what you compare it to. My urban fantasy novel, Esoterrorism, is grimdark compared to the Dresden Files but positively light and fluffy compared to Hellblazer. The Rules of Supervillainy is grim and gritty superhero fiction next to Wearing the Cape has got nothing on Watchmen. Grimdark is, however, a rallying cry for making things harsher and more intense. In short, grimdark is a direction rather than a state. There is no maximum saturation point that makes a work grimdark or not, it's simply if the reader thinks, "this is darker than my usual fair. I like it/don't like it because of that fact."

To be frank, you don't need to be a grimdark aficionado to appreciate the genre for what it is. As much as grimdark enthusiasts prefer to think of themselves as auteur fans pushing the envelope, let's face it that we lost that descriptor the moment millions of people turned in to see Ned Stark discover he wasn't in "that kind of story." You can like Joanne Rowling AND Joe Abercrombie. Hell, Voldemort is the subject of children's nightmares for a reason.

There is a yearning inside just about every child, teen, and adult to not be talked down to by the author. We see all manner of injustices, failures, horrors, and problems in our life which point to one inescapable conclusion--life is not fair. We like when our heroes stand up to this truism of life but there's a reason people relate so strongly to Spiderman, because his life sucks. Heroes can and should be able to achieve victories in life but we all, to the man I believe, know that life shouldn't and almost never does make it easy.

Still, if grimdark really is just relativistic then there's no point in using it as a term, right? Not quite. There are quite a few examples of fantasy and science fiction which serve as excellent leaders in the field of, "heroes living in crappy worlds, trying to survive because making them better isn't going to be happening." If grimdark is the Land of Oz then they were the inhabitants of its Emerald City.

Pre-Grimdark authors are ones I term to be the spiritual roots of the genre. They are the creators of Pulp Horror and Sword and Sorcery fiction. Robert E. Howard, H.P. Lovecraft, Fritz Leiber, Michael Moorcock, and basically every one else which Gary Gygax liked so much he combined together to create Dungeons and Dragons from. J.R.R Tolkien isn't what people think of when they think grimdark but, we'll be honest, he's the batter which is drawn from whenever people bake a cake in fantasy. He's the flour of fantasy and you can't make a cake without flour.

Early Grimdark appears right around the time of the late seventies and early to mid-Eighties. This is when the fourteen-year-old-boy market was recognized as the bloodthirsty collection of little psychopaths we were. Terminator, Robocop, Alien, Aliens, Conan the Barbarian (1982), Heavy Metal magazine, Predator, The Dark Knight Returns, Watchmen, and other hard-R material which made us crave more. That's just America's grimdark output too. Across the pond there was Judge Dredd, Strontium Dog, and their bastard love-children Warhammer and Warhammer 40K. The last is our genre namer as mentioned above. Say it with me, folks, "In the grim darkness of the far future, there is only war."

The Golden Age of Grimdark was anything but the Nineties was where grimdark really became a fad for teenagers across America. The Iron Age of comic books made it so every single superhero was a gun-toting psychopath with too many pockets (in other words, like British heroes were a decade earlier), Goth was now a "thing" found in malls across America, White Wolf games had replaced D&D as the thing for edgy gamers to play, and in 1991, George R.R. Martin first put down his pen to create A Game of Thrones.

It wouldn't be until 1996 that said novel was released but the public was ready. In a hip, post-modern world where nothing was taken seriously, George R.R. Martin wrote of a fantasy world where things were pretty damn serious. Andrzej Sapkowski released The Witcher series, which was every bit as dark and depressing as well as AWESOME as George's series.

The writers of grimdark were initially greeted with the pejoratives of, "this is awful fantasy." Not in terms of quality but content. Sapkowski and Martin didn't shy away from the horrific nature of war, the pointlessness of feudalism as anything but a protection racket for the nobility, and even crimes against women. They were bloody, dark, and excellent.

Science fiction produced some truly great geniuses as well with my favorite of the time period being Matthew Stover. I checked out his works during this time due to his, I kid you not, Star Wars novels which were unusually well, grim, for the genre. His non-licensed work proved to be an eye-opener for what was possible in galaxies-far-far-away in terms of sheer cynical badassery. These authors were hardly alone, though, but created a template which fans could point at and say, "We want more of this."

The Modern Age of Grimdark has begun with those authors who have taken advantage of the Renaissance of all those Goth, wannabe rebel, angsty teenagers turned adults (i.e. people like myself) who now are in the market for the kind of books they couldn't write themselves but are like their favorite as teenagers--only better written.

The relatively young medium of video games became a place for gamers to be able to enjoy grimdark's appeal. The Witcher trilogy of video games by CD Projekt Red has brought Sapkowski's magnum opus to the small screen, the modern Fallout video games were a great deal more serious than their predecessors, the Metro games one-upped them, and Dragon Age: Origins proudly proclaimed itself "dark fantasy." That's not including the literally thousands of video games where you find humanity has been all-but-wiped-out by zombies.

The aforementioned HBO's Game of Thrones, Walking Dead, and various knock-offs are the rallying cry on television but books have changed as well. With the downfall of the big publishing monopolies and rise of the indie scene, hundreds of new titles for every medium have arisen to revitalize the speculation fiction market. Some good, some bad, most in-between. Okay, mostly bad, but a LOT of good.

Rising stars in the grimdark business mainstream like Mark Lawrence, Joe Abercrombie, Scott Lynch, and Richard K. Morgan contrast against rising indie leaders like Tim Marquitz, Rob J. Hayes, the good folk at Grimdark Magazine, and hopefully me if you obey my hypnotic commands. Not everyone who is called grimdark is an actual grimdark author. Many authors who claim it are just going for the attention (I say because I am an angtsy hipster) and many authors who are called it deny it because they only wrote what was in their heads--and refuse to acknowledge, like me, said place is a horrific Chaos-fueled place of horror and madness. In short, though, grimdark is everywhere. Which may lead to one inescapable conclusion: we all have a little love for the dark in our hearts.
Posted by CTPhipps at 12:02 PM