We have a special treat for you today in an interview with author Devan Sagliani (Zombie Attack!, Undead L.A., and The Rising Dead). He's agreed to sit down with us and answer a few questions about his latest books, Curse of the Living (reviewed here) and Army of the Dead (reviewed here). Devan is also one of the publishers of the At Hell's Gate horror anthologies.

The Zombie Attack! series follows the adventures of Xander MacNamarra, a katana-wielding teenager, who is traveling the Wasteland of a post-apocalypse zombie-filled Earth. Accompanying Xander is his former child star girlfriend Felicity and his younger sidekick Benji. They run into Neo-Nazis, religious fundamentalists, and more in their quest to find the rarest thing possible in this new world: a home. 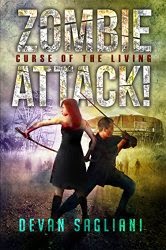 1. So, can you tell us about the Zombie Attack! series. What's it about?

The series follows sixteen-year-old Xander Macnamara as he flees a military base that has been overrun by zombies, heading south in search of his older brother Moto, who is off fighting the hordes with what remains of the military. Along the way Xander faces bikers, cannibals, Neo-Nazi’s, and doomsday cult members. He teams up with a comic book geek along the way, and a child celebrity turned reality television star. The action is constant throughout with the zombies pushing them on as more of a constant threat in a world gone mad with warlords and tribes fighting for control. It’s fast paced and doesn’t slow down. Most readers say they read it in a day or two, some in a single sitting despite it being over eighty-five thousand words.

2. What separates it from other zombie novels?

Aside from classics like Rot & Ruin by Jonathan Maberry or the Enemy series from Charlie Higson there aren’t a lot of young adult zombie novels out there. I wanted to show the zombie apocalypse through the eyes of those inheriting this screwed up world. I’m a fan of the Harry Potter series and I wanted to create something similar for zombies. Funny thing is people tell me it’s more like The Walking Dead meets The Hunger Games, even though I’d never seen a single episode of TWD before I wrote the first book. 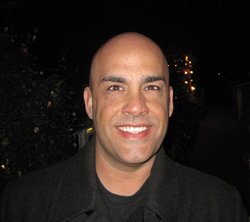 3. Can you describe its protagonists?

Xander is a tough sixteen-year-old kid who has been trained in martial arts and weapons by his older half-brother Moto. After Z-Day hits Moto leaves him at the base and tells him not to leave no matter what, but he does what he can to help everyone when the walls are knocked down and they are overrun by hordes of hungry undead monsters. Xander is a true friend who sticks up for the little guy, fights for what he believes in, but isn’t afraid to say he’s wrong or ask for help. He makes plenty of mistakes but he works hard to learn from each and every one of them. He’s a natural born leader even if he’s a little reluctant at first to take on the role. He’s the type of hero willing to sacrifice himself so his friends can live.

Benji is a comic book geek with no special skills but he’s intensely loyal. He’s a good kid who tries to see the best in people, even his enemies. He has a kind heart but he’s not stupid or gullible. He also knows how to lighten the darkest of moods with an upbeat joke.

Felicity Jane is a child celebrity turned reality television star. She’s sixteen as well, from a totally different world, and carries her own demons, including a personal battle with drug addiction. She’s feisty and resourceful and also very brave. Together they make quite a team.

4. You originally published the sequels, Curse of the Living, and Army of the Dead as one novel? Why separate them?

When I originally wrote the sequel I ended up getting so caught up in the story and wanting to wrap it all up and explain everything that I ended up writing this really long version. I poured my heart into that book. It consumed me. By the time I was done with rewrites it was twice the size of book one and I was totally exhausted. Originally it was published by Permuted Press. I used to tell people that I wished it was split into two books instead of one because it made more sense as a trilogy but unfortunately I had no way to change that. Recently I was able to get my rights back to all my books with Permuted and put them back out under my own imprint Laughing Crow Media.

The first thing I did was split the book into two – Curse of the Living and Army of the Dead. Permuted’s version was never marketed which is part of why I left. I never saw significant sales of that version in print or ebook. I’m hoping now that the books are all around the same length and the prices are slashed in half (or free on Kindle Unlimited) that I will be able to change that. The books were never pushed as Young Adult either, which is crazy, so I’m excited to share the series with a whole new group of readers – the ones it was originally intended for!

5. Why choose a katana as Xander's signature weapon?

I spend a lot of time talking to people on social media, Twitter in particular. I’d already written The Rising Dead by the time I started working on Zombie Attack!: Rise of the Horde and was arguing a lot about the best weapons to use when the inevitable zombie apocalypse eventually arrives. I became fascinated with the idea of giving this kid a katana, more so because it fit the storyline so well. Xander’s half-brother Moto was born and raised in Japan where he trained in martial arts. When he came to live with Xander and his father he became is de-facto martial arts teacher. It was Moto who taught Xander how to wield the katana.

In a lot of ways Xander represents my inner sixteen-year-old. I grew up obsessed with Japan and ninjas and weapons and martial arts. I still have throwing stars and nunchucks. We used to play with wooden bokken swords as kids too, but I was never allowed to have my own katana. I also wanted him to have a weapon that wouldn’t jam or need reloading, something silent and deadly that would give him an edge of stealth. 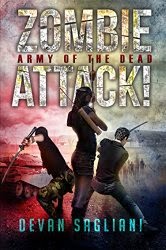 6. There's a lot more civilization leftover in your world than most zombie novels. Why is this?

These aren’t your modern day World War Z fast moving zombies. They are slow and shambling and easy to avoid in general, that is until they group together into hordes or corner you in a house or store. That’s why there are so many pockets of society left in various forms. It’s how I imagine things would most likely be if the world were ever to fall apart due to zombies or something similar.

7. Villains in your novels are varied. Our heroes have fought motorcycle gangs, Neo-Nazis, religious cultists, and even the CIA. What kind of qualities do you like to instill in your bad guys?

Because it’s a Young Adult series the villains are truly despicable with little or no redeeming qualities that reveal their humanity. Each and every one of them is completely self-absorbed and out of control in a world where there are far fewer consequences or people to tell them no. I had a blast playing around with these guys. They are awesomely bad, ruthless, narcissistic, and willing to kill anyone or anything that stands in their way.

8. What do you see as the role of the US military in your series?

All of the remaining military forces join together to pool their knowledge, talents, and resources against the varied threats, human and otherwise. Their initial role is to reclaim areas from undead or lawless biker gangs. We also see them defend against attacks on their bases and wage battle against entrenched warlords out to carve their own piece of new territory.

9. Do you think it'll be possible to build the US government back up in your series or do you think something new will emerge?

I foresee them attempting to form new independent states with their own systems of governance. From there I imagine that they would send representatives to discuss federal issues in some kind of national platform, at least in the mainland of the former United States of America. I don’t think they’d be able to recreate the type of government we know today because the world would have changed so dramatically that the idea of paying people to sit around arguing about social issues seems highly unlikely. They’d need to be more effective than our modern day Congress at problem solving, that’s for sure.

10. Sonya is a great character. How did you come up with her?

I wanted to add another strong female voice to the series so I started crafting my ideal of that and Sonya came to life before my eyes. She’s far more complex than the other characters and much more difficult to read, which I think is one of her strengths. It’s hard not to fall in love with her the more you get to know her. She’s passionate, brave, loyal, smart, relentless, and absolutely deadly to anyone who threatens her or the people she loves.

11. Who is your favorite character in the series? Aside from the main two?

I’d have to say Sonya. I put a lot of love into her character and clearly it paid off since more people talk about her after book two than they do about Xander. That’s a huge compliment!

12. Do you see Army of the Dead as the end of the Zombie Attack! series? Do you have anything planned for us in the future?

Like I said, originally I thought it would be the end since the books were with Permuted Press and we’d agreed not to pursue it further. Now that it’s back in my hands I am considering doing more books. I’d love to write something around Benji but set in the future that shows how things have progressed as the military fights to regain control of lost regions of the country. I guess in the end it will depend on the fans and how much interest there is. I really try to listen to what readers tell me and learn from it so I can do my best to give them what they want. It doesn’t always happen.

Sometimes the characters just don’t want to do what I want them to do. I have to follow my heart and imagination to wherever they lead me. It can be a surprise at times that goes right off the outline, causing heavy rewrites but you know how great characters take on a life of their own. And you can’t make everyone happy. In the end I’d be happy to see more adventures set in this world.

Thanks for the interview.

You can find more information about Devan Sagliani at the following locations!