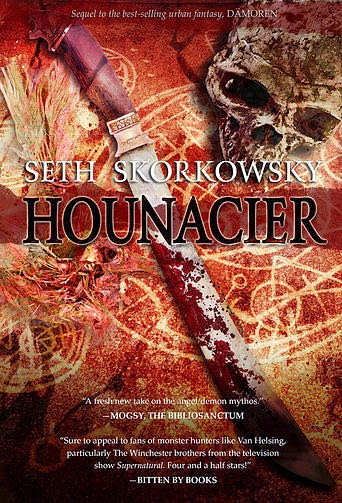 The Valducan series by Seth Skorkowsky began last year with the very strong entry, Damoren. Damoren followed the adventures of Matt Hollis, mystical gunslinger and demon hunter as he joined the Valducan organization in attempting to rid the world of evil supernatural beings. During that adventure, he thwarted an attempt to wipe out all of the "holy weapons" which the organization used to destroy demons and faced down the mother of all monsters, Tiamat. It was an excellent globe-trotting adventure and darker than most urban fantasy fair with a good deal of horror. I liked it and was eager to see what would happen in the second book.

The premise is Malcolm Romero, his real name rather than an alias, is a white atheist journalist who converts to Voodoo after witnessing an exorcism by a bokkar in Haiti. Acquiring the holy weapon Hounacier, which is a mystical machete, he proceeds to become both a practicioner of Hoodo magic as well as a Valducan demon hunter. Summoned to New Orleans by the death of his mentor, he proceeds to reconnect with old associates while trying to see whether or not he still fits into his old life.

Hounacier is a great deal different from Damoren. Not content to just give us the next adventure of Matt Hollis, Seth Skorkowsky seems to be interested in switching between the various holy weapon and giving us different perspectives on the world. I had some trepidation about this because I really liked Matt Hollis and wasn't really sold on the Valducan organization. Still, I was willing to give Malcolm a try after his strong introduction in the opening chapter.

I was pleasantly surprised by the results as Malcolm is almost as interesting as Matt Hollis (if not quite) and involved in an intensely personal quest to protect his loved ones from demons. Seth Skorkowsky wisely chooses to dial back the stories from the apocalypse to more personal tales of monster hunting. Saving the world and saving a family are both, after all, things heroes will attempt to do with all of their might.

The practices of Voodoo are explored in this book, separating the religious aspects from the mystical framework. While some readers may question the fact Malcolm is a white protagonist chosen by the loa to be a demon hunter, this is subverted with a surprisingly ethnically diverse cast and the fact Malcolm isn't all that good at his job. He's not a "Mighty Whitey" character and I came to enjoy how being raised outside the faith inhibited in some places.

I was also pleased with the immense amount of research done. This isn't a book written after consulting Wikipedia for a few minutes. Voodoo is portrayed as a valid form of religion, no more alien than any other faith, which just so happens to be literally true in the setting.

One of my favorite bits from the story is Malcolm Romero having to deal with the fact he's considered a crazy religious fanatic, weirdo, and possible murderer by the greater Voodoo community. There's a nice moment where he leads to an air conditioned church running charity drives and doing community service where he's deeply uncomfortable. As a demon hunter, Malcolm must always exist on the outskirts of civilization and seeing the stereotypical depiction of Voodoo subverted was a nice change of pace.

Malcolm is a good character, stuck in a life which has alienated him from all but his fellow demon-hunters and religious extremists. He's forgotten how to relate to quote-unquote normal people and his sinister reputation comes to bite him in the ass several times. I also liked his relationship with his ex-fiance, which is a romance I felt to be both believable as well as enjoyable to read about.

If I have any complaints, it's with the fact the book promises a team-up with Matt Hollis and Malcolm on the back as well as early in the book. Matt shows up only at the very end of the book and barely has any relevance to the plot. Matt, at the end of the day, is just too awesome to incorporate into the book without wanting to see him dominate the book. I hope he'll show up as the star of future books because his usage here was just a tease.

In conclusion, Hounacier is a very different book from Damoren but not a bad one. Those looking for a continuation of Matt Hollis demon-slaying adventures will have to wait for future installments of the book. Those interested in a Voodoo-practicing demon-hunting stalking werewolves and succubi in New Orleans, however, are in for a treat.

Buy at Amazon.com
Posted by CTPhipps at 5:23 PM