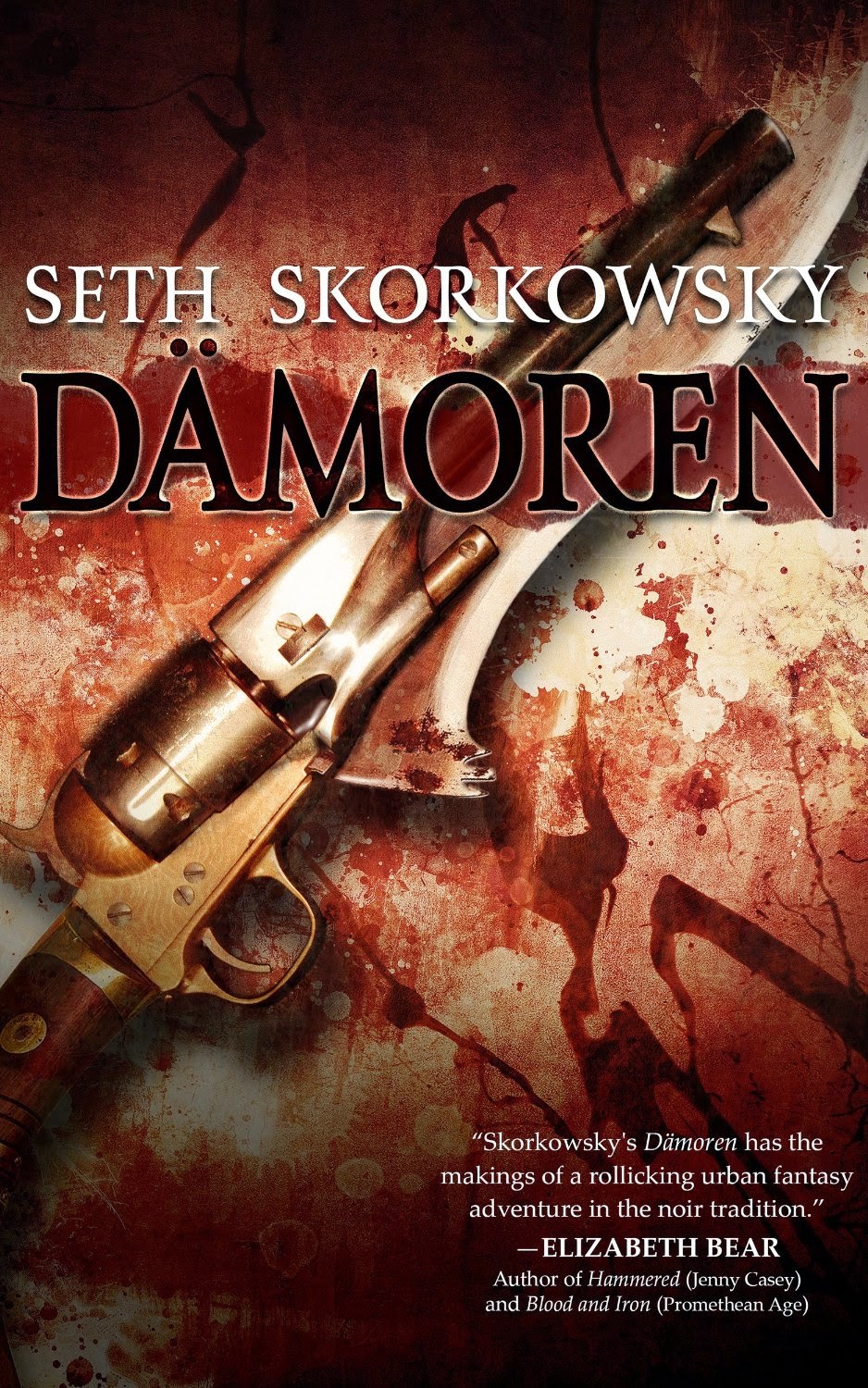 What if Harry Dresden was a foul-mouthed gunslinger?

That's sort of what I think about Damoren. This is unfair to the author as the character of Matt Hollis isn't all that similar to Harry. He's not a pop cultured badass, for example, but a grizzled veteran with a dozen years of demon hunting. The book does make me think of the Dresden Files, though, and Stephen King's Dark Tower to some extent. If for no other reason there's not that many demon-hunting gunslingers around.

Damoren is the first book in the Valducan series, which is about a group of demon-hunting soldiers who wield holy weapons capable of slaying them. Each demon-hunter is fanatically protective of their weapon, treating it like their partner in a marriage. This may not be wrong, either, as each weapon chooses its wielder and possesses some form of sentience. The Valducan aren't terribly happy about Matt possessing a weapon, though, because he's possessed.

Or so it seems.

A demon marked Matt Hollis in the past and the demon-hunter who was ordered to kill him, adopted him instead. Matt has since bonded with Damoren, the holy revolver which provides the book its title, and gone on to be a successful independent demon hunter. The Valducan have come to make amends, however, due to the fact someone is trying to destroy all of the holy weapons in the world. Thus, the Valducan need every holy weapon holder in their service, even if most of them would like to see Matt killed.

The book is an entertaining collection of action scenes and Matt dealing with a centuries-old organization of which he has no relationship but everyone else is almost family within. Some of them want Matt dead, some of them think he's alright, and others are suspicious but all of them are speaking to each other like they've known each other for decades. Which they have.

Honestly, Seth Skorkowsky is a little too effective in making Matt Hollis feel like an outsider since I really wanted him to kill the Valducan hunters at various points. Unfortunately, this series is about acclimating Matt to this group rather than showing he's a better hunter than all of them combined.  What can I say? I'm a big fan of the lone badass who doesn't play by the rules and gives the middle finger to the arrogant blockheads who think they can tell him what to do.

The parts of the book which aren't about Matt Hollis fitting in like a square peg in a round-shaped hole are excellent action scenes where the demon-slaying badass finds himself up against a host of vile fiends. Vampires, werewolves, Lamia, dragons, and more are all products of demonic possession in this universe. They're all completely evil and almost unkillable since they can jump to new bodies unless slain with a holy weapon. I like unromanticized monsters and find this book provides me with plenty.

The mythology is well-developed in the book and there's a selection of writings from past-demon hunters interspersed with the book's present-day adventures. I like it when authors take time to develop how the supernatural "rules" of their setting work. Honestly, if I have a complaint about the mythology it's the fact the author reveals too much about the setting by the end. I think a lot of the book's last-minute revelations could have been saved for future releases.

In conclusion, Damoren is a top-quality urban fantasy novel. If it's not up there with the Dresden Files' latter volumes then it's certainly above the first couple of them. Matt Hollis is an enjoyable character and the villains are reprehensible. This would work quite well as a stand-alone volume but I'm eager to see where this series goes.

Buy at Amazon.com
Posted by CTPhipps at 9:32 PM