That Which Should Not Be review 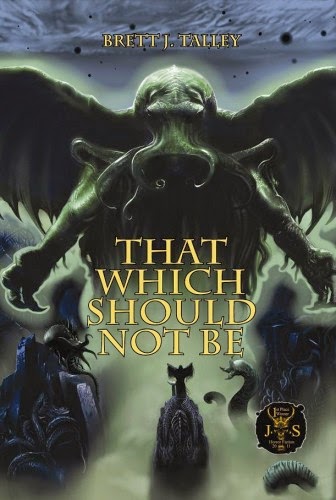 That Which Should Not Be by Brett J. Talley is an interesting bit of Post-Lovecraftian fiction. I dislike the term pastiche even if that is the appropriate term for the continuing stories of Cthulhu Mythos by other writers than the original "Lovecraft circle." In many ways, TWSNB is a throwback to the classic tales of the Cthulhu mythos but it also makes several choices which I believe will be controversial with Lovecraft purists.

The premise of the novel is Miskatonic student, Carter Weston, is sent by his professor to acquire a book of magic said to be the key to understanding the deeper mysteries of the Necronomicon. The Incendium Maleficarum (The Inferno of the Witch) lures Carter Weston to a remote fishing village where he discovers four locals who have each had harrowing encounters with the Cthulhu Mythos.

Hearing the terrible stories of those who have barely escaped with their lives after encountering the darkest of the dark, Carter Weston must make the choice of continuing his journey to acquire the accursed book he knows is in the town or flee. As one might guess, That Which Should Not Be is more of an anthology than a straight bit of linear storytelling. It is, however, a book which mostly manages to capture the "classic" feel of H.P. Lovecraft.

The stories of the four locals are the most interesting portion of the book, each very heavy on atmosphere and light on gore. There's a lot of nods to the book, Dracula, and Lovecraft's other works in ways which don't necessarily relate to the story. For example, a boat is named Kadath and an asylum Doctor is named Seward. A few of these are red-herrings like a man named Vladimir and a nun named Bartory in a Hollywood Transylvania-like village who aren't what you suspect

Overall, all of the stories are suitably creepy and atmospheric. I think my favorite of the four was probably the one dealing with the curse of the Wendigo. While I've never been a big fan of Ithaqua, I enjoyed this story. My second favorite is a story about a ship which blows off course and finds itself in a otherworldly realm where the sea is black as tar and the stars shine differently than on Earth. The monsters in all of them are portrayed as powerful, dangerous, and insanity-inducing.

The only problem I have with That Which Should Not Be is the stories are definitely more on the Derleth side of things than the Lovecraftian. They are not cosmic horror stories but simple horror tales. The cross is portrayed as an item which holds sway over Lovecraftian monsters and while it's possible the cross is simply this universe's version of the Elder Sign (hinted at by suggesting the Egyptian ankh works just as well), the characters believe it is through God's will this is achieved.

Despite this, I actually liked the book using several passages from the King James Bible to link the world's most famous cosmology to Lovecraft's writings. The Nephilim, the alien appearance of the Seraphim, the Book of Revelations, and the Biblical Leviathan are all "revealed" to be referring to Lovecraft's creatures. I found this to be rather clever as, too often, people seem to forget how much messed-up stuff is in the Bible.

While I think adding a Christian dimension to Lovecraft is somewhat counter-intuitive, the idea that the Old Ones were once known to people of even the world's most populace religions amuses me. Lovecraft, himself, casts Cthulhu as the god Dagon to the people of Innsmouth, though this is just Obed Marsh's interpretation of Deep One religious practices.

Likewise, I think the final section of the book moves the story from personal horror to something more approaching "The Shadow of Yog-Sothoth." It's a race against time to prevent Great Cthulhu from being awoken with magic. A heroic sacrifice and a book of spells invocation later, the world is still standing. While the book ends on an ominous note, I do feel the threat of the Great Old Ones is somewhat diminished. I will say the book being a period piece deserves to be commended. A lot of the original Lovecraftian flavor is lost when the stories are modernized.

In conclusion, it's a very good book but decidedly on the Lovecraft-Lite spectrum versus the more nihilistic interpretations of the Mythos. This isn't necessarily a bad thing, though, but fans should be forewarned if they're expecting something entirely similar to Howard Phillip's writings. I, myself, enjoyed it.

Buy at Amazon.com
Posted by CTPhipps at 8:00 PM