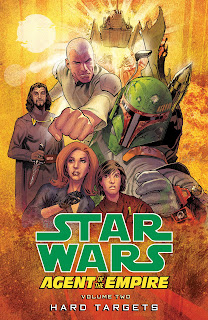 Jahan Cross is the best thing to happen to the Star Wars Expanded Universe in years. A relatively simple concept: James Bond in Space, he has adventures that don't feel like anything else in Star Wars but feel perfectly appropriate for the setting. Much like the X-wing books, the Agent of the Empire comics feel like stories that expand on the universe while not losing the specific flavor of the galaxy far-far away.

The premise of Hard Targets is that Jahan Cross has been assigned to kill the new Count of Serenno. This is actually a minor spoiler for the first book but it's a fake-out which works just as well knowing what's going to happen. A minor relative of Count Dooku's, the noble is being courted by Bail Organa in hopes of bringing him into the Rebellion. Jahan Cross makes sure that doesn't happen.

The rest of the comic book deals with the fallout of this act. Jahan Cross has no objections to murder, he's a bit of a sociopath like that (much like Fleming's creation), but he likes his murders to be justified. Finding out that the Empire's intelligence network may have accepted a bribe to bring about the Count's death bothers him. There's also the issue of the Count's son, a defenseless boy Jahan Cross feels some small obligation to. Mostly because he's just murdered the kid's father.

Throw in the fact that Jahan Cross' father is an Alderaanian rebel sympathizer and Jahan's next assignment takes him to Serenno then hit and presto! You have one of the most consistently entertaining titles in the Star Wars comic mythos.

Unfortunately, it seems very likely that Hard Targets will be the last of Jahan Cross' adventures. The Force (and sales) are not with the agent of the Empire. This is an unfortunate side effect of a declining comics market, the lack of any movie-characters in a starring role, and the fact the economy sucks. I, myself, was stupid enough not to buy this when it first came out and only recently picked it up in TPB format.

I think the chief appeal of Jahan Cross is his moral ambiguity. Much like James Bond, he's an agent of the state and a hired killer but with a certain degree of morality. He's not a complete monster like Tarkin or Ysanne Isard but lacks the kind of moral fiber which would allow him to rebel. Given he willingly breaks out a fugitive, it's also fairly clear he's not motivated by love of country either. At least, solely.

The book has an interesting relationship with the female gender as well. Jahan Cross, at times, feels like a sexist pig. There's even a scene where he teases Leia and Winter in a manner which can only be described as flirtatious (despite the fact they're teenagers). He also hits on the loyal bodyguard of a man he just murdered while courting another woman. Yet, the book itself, isn't sexist. The women are incredibly capable and forceful with Jahan Cross just happening to have a serious blind spot regarding them.

The action is excellent in this book, as always, and the writers know not to oversell Cross. Boba Fett and Jahan Cross have a couple of showdowns, only for the latter to get his ass kicked. Not only does this make sense, Boba being the most dangerous non-Force User in the Star Wars galaxy, but losing gracefully makes Cross that much more of a badass. The fact he survived is proof-enough he's tough. Besides, it would be ridiculous for Jahan Cross to defeat Boba Fett while the latter is covered in Mandalorian armor while the former is, well, not.

I approve of the art in this volume as well. Serenno is beautifully realized, as is Alderaan. These are worlds which have received little attention in Star Wars so watching them get expanded on is delightful. While I don't think we'll see another Agent of the Empire volume, I'd absolutely love to see one.