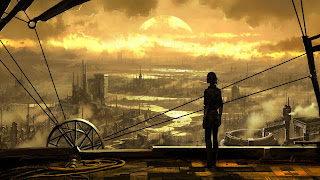 Since I have some extra time today, I thought I'd talk about one of my favorite lesser-known genres. Like urban-fantasy, Steampunk is one of the creatures which has grown up in recent years as a counterbalance to more traditional science-fiction and fantasy storytelling settings. But what is Steampunk?

Honestly, a lot of people don't know as there's been complaints that all you have to do is place some gears or clockwork on an object to make it part of the genre. Part of the reason for this ambiguity is steampunk began as a contrast to William Gibson's brief popularity as the originator of the 'cyberpunk' style of science fiction.

Enclosed is a copy of my 1979 novel Morlock Night; I'd appreciate your being so good as to route it Faren Miller, as it's a prime piece of evidence in the great debate as to who in "the Powers/Blaylock/Jeter fantasy triumvirate" was writing in the "gonzo-historical manner" first. Though of course, I did find her review in the March Locus to be quite flattering.

Personally, I think Victorian fantasies are going to be the next big thing, as long as we can come up with a fitting collective term for Powers, Blaylock and myself. Something based on the appropriate technology of the era; like 'steam-punks', perhaps.

Cyberpunk was very clearly defined by William Gibson as a near-future dystopian style of fiction designed around the idea of being mankind literally ****ed by technology. Steampunk would, by its literal definition, be the Victorian equivalent and there has been numerous works written in this regard. After all, the 19th century is the hey-day of imperialism and the culmination of technology's rapid advancement during this period was the Great War.

From my own flirtations with the genre, however, it's not necessarily the case. While my favorite Steampunk works use the classicism, racism, and sexism of the period to tell interesting stories about today--a lot of fans are more interested in the romanticism of the period. The idea of gentlemen inventors and a period of time when the world still had unexplored regions.

In short, Steampunk is retro-science fiction set in the period of time from the 17th to early 20th century with Victorian England and the Wild West being the most common settings. Variants on Steampunk include fantasy worlds resembling the Industrial Revolution and post-apocalyptic situations where humanity has returned to an earlier but still technological level of development.

Retroactively, Jules Verne and H.G. Wells are the fathers of this style of science fiction. While they were simply writing for their time, the two men laid the foundations for all future imitators. Amusingly, given the heavy amount of social satire both men put into their writing, you might suggest they were the kind of individuals to focus on the 'punk' element themselves.

Not all period pieces during this time are Steampunk--only those which are deliberately anachronistic technological advances. Cowboys vs. Aliens doesn't have steam devices but comments on American Imperialism. The Guy Richie Sherlock Holmes movies with their radios and Great War forehsadowing qualifies. Likewise, the Wild Wild West movie is a badly-made but accurate example of how the setting's conflicts work.

Why do Steampunk, though? The answer is multi-fold: it's a road-less traveled, there's a lot of values dissonance which is easy to exploit for drama, and it's a time-period when romanticism clashed heavily with grim reality. A man might build an airship capable of circumnavigating the globe but he's still surrounded by a society where other races are second-class citizens. We also know much of the downfalls of industrialization, even as we reap its benefits.

Those interested in writing Steampunk should choose what exactly they wish to say about the time-period and/or modern situations. It's entirely possible to write surface Steampunk, making use of the concepts of it without actually getting too in-depth on the ramifications of the technology involved but I think this is a poor use of the genre. Part of 20,000 Leagues Under the Sea's fun is Jules Verne's examination of what the electrical submarine does--specifically, provides an unstable man with unlimited ability to murder the rest of the world's sailors. A similar effect is resulted from Robur the Conqueror's airship.

Despite this, writers should not constrain themselves from going all out when creating their alternate Early Industrial settings. While examining the consequences of one element is good, you can also create a wholesale fantasy-land of clockwork and coal-powered devices. Realism has no necessary relationship to the genre and should never stand in the way of a good story. The Time Machine, after all, is a tale which uses travel to distant centuries in-order to examine the issues of class in the 19th century. Besides, if giant transforming robot-trains are wrong, I don't want to be right.

Oddly, I don't recommend attempting to address the racism and sexism of the time in-depth unless you have a very deft hand. Not only does it tend to suck the joy out of a subject, the levels of it could vary from place-to-place and even person-to-person. Still, ignoring it is likely to feel inauthentic to readers. Acknowledging these issues and drawing from them helps keep the setting believable even if you're running around with steam-powered replacement super-limbs. As one commentator said, "I can buy a gigantic mechanical spider. I can't buy a racism-free 19th century America."

Steampunk highlights a period which I term to be "The Age of Transition." In a very real way, the Industrial Revolution up until the Great War represented the period where Old Ideas clashed with the New. Everything from the way war was conducted to travel to the way people interacted changed due to the development of technology. Whether you curse the past world or long for it, Steampunk is about these two ways of looking at the world colliding. I consider World War 1 the end-point for any historical Steampunk story because it's when the horrors of modernized warfare eradicated any remaining romantic notions of chivalry, monarchy, invention, or warfare.

Take note writers have been known to combine steampunk settings with other genres as well. Arcanum: Of Steamworks and Magic Obscura examines what happens when a bog-standard fantasy setting of dwarves and elves hits the Industrial Revolution. Likewise, Japan's Sakura Taisen takes a romanticized view of 1920s Japan to have a troupe of actresses fight demons in steam mecha.

It's also possible to include Steampunk elements in settings which are not actually of the genre. TSR's Dragonlance setting added flavor to Gnomes by making them capable of creating Industrial Age devices, merely ones too dangerous for common use. Likewise, Firefly is a science fiction series which thrives on adopting 19th century values, clothing, and attitudes to provide contrast.

It should be noted steampunk has inspired other retro-future settings as well. There is now "Dieselpunk" covering the 1920s and Flash Gordon meets Pulp futurism as well as "Clockpunk", highlighting the introduction of unimaginable inventions into Renaissance or earlier time-periods. I suspect this will continue as the spirit of adventure will always find new settings for the introduction of machines. In this respect, Daedalus of the Icarus wings and mechanical bull was the first Steampunk hero.

In the end, Steampunk is a a style which can be done easily but doing it well is another matter entirely. The Industrial Revolution was a period which changed human history forever, taking mankind into a new age of development. Capturing that feel of excitement and terror is a daunting prospect. For that, a person needs to have the most elusive quality any writer can possess: a well-told story. Once you possess that, everything else will fall into place. Is Steampunk the genre for you? Only you can tell and if it is, perhaps you'll be one of the defining authors which shapes it.

Thanks for reading!
Posted by CTPhipps at 10:50 AM