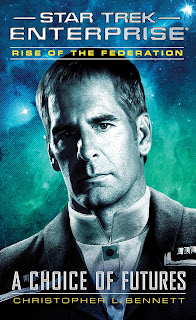 A Choice of Futures is an interesting novel. In a weird way, I'd say it's as close to a Tom Clancy novel as you're going to find in Star Trek. Only, instead of Jack Ryan, we have Archer and instead of John Clarke we've got Trip. For those of you who have never touched a Tom Clancy novel in your life, what I'm saying is that it functions on two levels: a political one as well as a spy one. In fact, Christopher Bennett does Tom Clancy up one by having a third level of pure Star Trek exploration.

Christopher Bennett takes advantage of the Enterprise timeline's relatively close time period with "our" future to make things somewhat familiar. The newly formed Federation has many problems with it--ones very similar to ones from history.

Without a Prime Directive in place, people are calling for the UFP to become the Alpha Quadrant's police-men and Starfleet's leaders are eager to play the role (all except for Admiral Archer). Comparisons with the USA are inevitable but there's also allusions to the USSR and even the Crusades.

As an audience, we know Starfleet is going to become a scientific and exploratory body dedicated to peaceful first-contact. Here, however, it's obvious the majority of the UFP's leaders are seeing something more like NATO. After both the Xindi and Romulan War, this is an understandable position.

Indeed, I'm honestly not sure it's wrong despite several potentially disastrous situations being averted primarily due to the former Enterprise crew's relative pacifism. Part of my problem with The Undiscovered Country is repeated here: it's hard to have a message of peace and understanding when there's a third party working to bring about war. Of course, I loved The Sum of All Fears and TUC is my favorite Star Trek movie so I can't complain too much.

For those who are interested in jumping onto the Enterprise novel bandwagon but haven't purchased previous books, you won't have to in order to keep up. It's an excellent starting point to the series with even the strangest element (Trip is alive and a member of Section 31) being explained. All one really has to know is the Romulans have been defeated and everyone is settling into an uncomfortable new alliance.

The changes to the characters feel natural and appropriate. Archer is now an Admiral, adjusting to it better than Captain Kirk or Picard would have, while T'Pol has moved onto her own command. Malcolm Reed is also in line for his own ship, a promotion which I think is long overdue. I wasn't too happy with the continued half-relationship between Trip and T'Pol but that's more or less inevitable given their circumstances.

Christopher Bennett's talent for "arc welding" comes into play here as he attempts to address a large number of the issues leftover from the series. Without spoiling anything, he brings back several one-shot enemies and shows their reaction to the changing state of the galaxy. Prior to the Federation, with the exception of the Klingons, it was more or less a lawless universe. Watching that change is a fascinating sight to see. I especially liked learning more about the mysterious Gray-like aliens from "Silent Enemy."

Weirdly, an element I really appreciated from the book was a retcon regarding the Orions. One of the most annoying changes done by Enterprise, undoubtedly done for changing sensibilities, was their transformation of the misogynist slaver group into a female-controlled society of slavers. That, to me, was actually more offensive than the original. Here, Christopher combines the two in such a way as to leave their role as corrupt vice peddlers intact.

There's some really good moments in the book, including tying in a TOS character's history to early Starfleet, but I felt the book could have been improved by changing some of its focus. The Captain Reed section is completely divorced from the main plot and didn't feel thematically consistent with the rest. Aside from learning to accept alien life-forms (and keep their secrets), I felt it could have been any old episode of Star Trek. I would have much preferred a greater focus on the political angle of the newly formed Federation.

Overall, I found A Choice of Futures to be a very satisfying read.The characters are spot-on, the situations are interesting, and the storytelling is excellent. I also love the way Christopher Bennett effortlessly weaves in story elements from a variety of sources to make the episodic setting of Star Trek feel more interconnected and alive. Honestly, though, I would have enjoyed more examination of the monumental nature of their new government. A person on the street's perspective on the new Federation would have been appreciated.