Why Luke Skywalker is still relevant 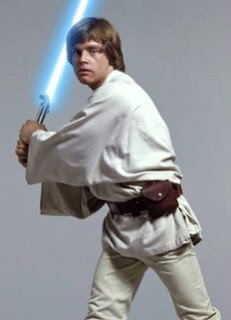 This is going to be an odd essay, mostly related to the fact I've been feeling particularly Star Wars-ish lately. It's also possibly an essay that's too late to much much difference in the grand scheme of things. Recently, Del Ray announced Star Wars: Crucible, which will be the last hurrah of the Big Three (Luke, Han, and Leia).

This isn't something I necessarily oppose because I think Luke Skywalker deserves a chance at peace and happiness in his retirement. Also, I think any retirement is going to be about ten minutes as authors won't be able to resist using the Jedi Knights' Grandmaster.

However, I feel the need to state something that's been bothering me for some time. Basically, it's the fact that Luke Skywalker has been increasingly marginalized as not only a figure within the Star Wars Expanded Universe but also as an inspiration for new characters. We've got countless knock-offs of Boba Fett, Han Solo, Obi-Wan Kenobi, and Darth Vader but you rarely see characters inspired by Luke. I can only think of Jaden Korr, Corran Horn, and Zayne Carrick.

I think part of this is the fact that idealism is a hard sell for many authors. Whenever someone wants to make Star Wars more relevant, they usually dip into the grim and gritty. The problem is that Warhammer 40K has already mastered darkness and Star Wars is never going to be as good at it.

Troy Denning is a particular offender here, even though I love his work in the Forgotten Realms and have preferred him to several other Star Wars authors. If you would describe Luke Skywalker, would you use the words "ruthless chessmaster" and "brooding antihero who makes the hard decisions"? If you look at the text and wonder what the hell I'm talking about, you may feel like I did reading Troy's take on Luke.

It's a bit like the black and white costume mullet-sporting Superman who appeared in The Death of Superman grand-finale (spoiler: he comes back).


There's just something wrong with this picture and you can't quite put it into words. Luke Skywalker has had a similar issue with recent covers, The Swarm War one emphasizing what's gone wrong with the character.


It's been awhile since The Swarm War and Luke's characterization has continued to remain somewhat off-kilter. I won't spoil them for people who haven't read Legacy of the Force or Fate of the Jedi but they mostly revolve around Luke's willingness to get his hands dirty to make sure events play out. I'm not saying those characters don't have a place in Star Wars but they don't really fit what I want from the Son of Skywalker.

Fixing Luke Skywalker's characterization isn't really the point I'm trying to make, though. Star Wars has moved beyond the original trilogy and become something much bigger. There's the Knights of the Old Republic timeline, The Clone Wars timeline, and even stuff being done at the very beginning of the Jedi Knighthood. Instead, this is an essay to say that the kind of hero Luke represents still has a place in the Star Wars galaxy.


The distillation of my problem with the current Star Wars Expanded Universe is exemplified by the character of Cade Skywalker, Luke Skywalker's great-grandson. Cade Skywalker is the Star Wars version of the nineties anti-hero which created the Dark Age of Comics (along with rampant comic book speculation).

He's a drug-using, foul-mouthed, womanizing (which I don't object to save for the way he treats women), ultra-violent all-round scumbag. The premise of Star Wars: Legacy is that Cade Skywalker, due to his superior genes, is the only one who can defeat the Dark Lord of the Sith.


It may surprise you that I actually liked Star Wars: Legacy. There was just the irony that I loved everything about it but the protagonist. It wasn't just that Luke Skywalker's only surviving descendants all chose to turn their back on the Jedi way, it's tragic but stuff happens, it was the fact the story insisted it all fell to Cade Skywalker. In real life, we turned against the idea that "special blood" was important awhile ago. Even in Star Wars where the Force has a genetic element, Obi-Wan and Han manage to prove you don't need to related to the Chosen One to show you're a hero.

Legacy started me questioning whether creators thought fans only cared about lightsabers and telekinesis. I would rather have had someone unrelated to Luke Skywalker who shared his ideology a Jedi Knight should be compassionate, forgiving, and noble than someone who just happens to share his genetic code.

Sadly, there are a staggering number of renegade Jedi Knight protagonists and only a few similar to Luke. When Jedi Knights do appear in comics, they're often based on the Prequel version - stuffy and kind of obnoxious. Cade's story was entertaining, in small doses, but his Linkin Park-listening Emo antics made me wish Luke would come back from the dead and show his descendant how it was done. Which is the point of Legacy, I should point out, that Cade is the wrong man for the wrong time.

That doesn't change the fact I think we could use a bit more idealism in Star Wars. We live in a time where there's a lot of uncertainty (not that there's never been a time when there isn't) both economically and socially. With the Clone Wars starring Anakin Skywalker, a man destined to be destroyed by his own insane lusts, I wonder if the universe might benefit from a bit of wide-eyed optimism.

Because that, my friends, is the essence of Luke Skywalker. He's the guy who believed the wider universe of a galaxy far far away was a place WORTH exploring. With the way dark science fiction portrays things, too often Owen Lars starts to look like the smart one in the family. Even during the darkest period of the Empire, there's all sorts of fabulous and wonderful things to see.

Luke Skywalker is also the core of the Jedi Knight as it should be. Heroes do not have to be roguish anti-heroes who only derive their power to oppose evil from being a slightly less offensive form of scumbag. We don't need Riddick and Cade Skywalker to defeat the Empire, we need folk who are willing to stand up against evil. As Steve Rogers said in the Captain America movie, "I don't want to kill anyone, I just hate bullies."

Luke Skywalker also highlights the fundamental mundanity of good. For all the fact he's from a Chosen bloodline, Luke grew up on a moisture farm in the backend of the universe. It was his humility and decency which saved the universe more than his force powers. Cade Skywalker can defeat Sith Lords because he's got a midiclorian count out the wazoo but Luke defeated Vader only once and it was irrelevant to how he "won" the battle. Luke won because he was simply a nicer person and awakened the good still inside the Dark Lord.

Luke is willing to kill people, yes, but he's not happy about it. When he destroyed the Death Star, it killed over a million people but it was to prevent uncounted billions from dying. When he slays Stormtroopers it's in self-defense. I have no doubt in my mind that Luke would kill Darth Maul if he had to, but he'd give the guy a chance to recant. This is the kind of role-model we should have for kids and is the sort of man I want to read about.